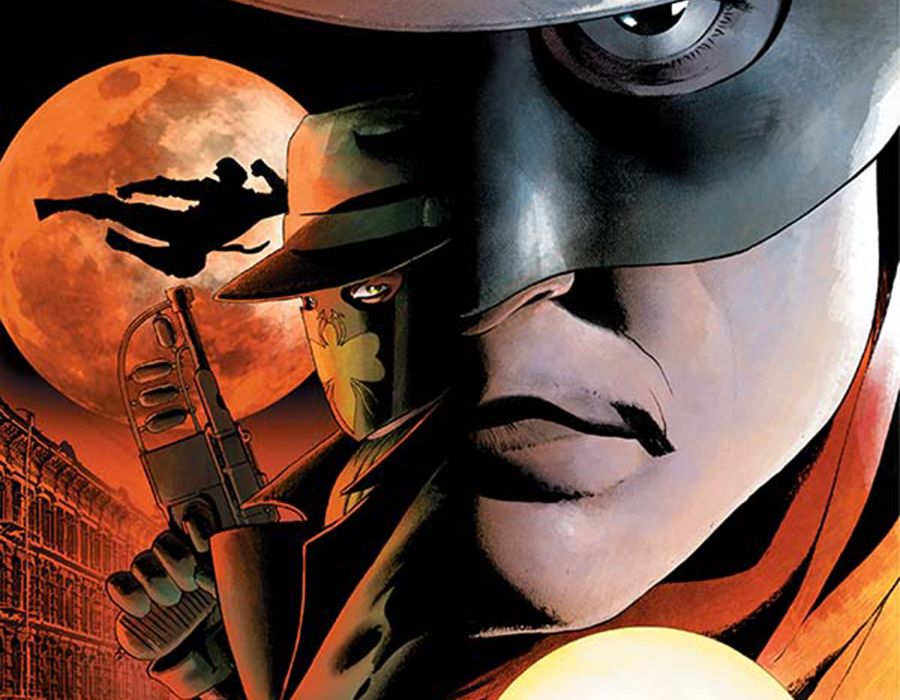 A grizzled Lone Ranger teams up with a rookie Green Hornet to take down ghosts of the past. Read on for our review of “Lone Ranger/Green Hornet” #1 but be warned, there are some spoilers within. 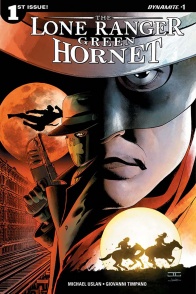 Written by Michael Usland
Illustrated by Giovanni Timpano and Troy Peteri
A tale of super-heroics and family that has taken eighty years to be told! This first chapter, entitled “Those Thrilling Days of Yesteryear,” creates a world of carefully researched alternative history in 1936 as we learn whatever happened to The Lone Ranger and discover his familial link to the emergence of a man who is a modern day urban version of The Lone Ranger himself. What is the blood connection of The Green Hornet to The Lone Ranger? What is the link of Olympic runner Jesse Owens to The Green Hornet? What role does Bat Masterson play in The Lone Ranger’s New York adventure? What intense rift tears a family apart just when America desperately needs a great champion of justice? The shocking answers lie in the historic first issue of “The Lone Ranger Meets the Green Hornet: Champions of Justice!”

Dynamite is home to many, many classic licenses. They have Red Sonja, James Bond, Vampirella and more. This week, they do what they tend to do well – mashups. “Swords of Sorrow” was a really strong event and in the past, Dynamite has found success in putting together these legendary characters. What works for “Lone Ranger/Green Hornet” #1 is it’s embracing of it’s history but that’s also what somewhat hurts it. “Lone Ranger/Green Hornet” #1 is a perfect book for fans of these characters but a little bit of a hurdle for new comers.

The year is 1936 and Britt Reid’s dad is visiting his Uncle John (The Lone Ranger) as he tells kids stories of his past. Dan Reid is worried about his son and his aimlessness. At this point, the world is dealing with a lot. There’s the rise of Hitler and Mussolini in Europe and crime is running rampant in the United States with the rise of gangsters following in the footsteps of Al Capone. After Dan dies, Britt is left to run the newspaper and the empire his father left behind. When Eliot Ness comes to visit, Britt has to make hard decisions as a ghost from The Lone Ranger’s past has come back.

“Lone Ranger/Green Hornet” #1 really embraces it’s history and that’s what really works for it. Writer Michael Uslan uses the history of these two characters and the history of the time in a really effective way. I don’t have a ton of familiarity with these two characters but I found myself able to follow the familial connections and the plot itself. Uslan doesn’t throw readers into something completely soaked in continuity. This was the first ever Lone Ranger and Green Hornet comic book I’d ever read and I found his approach very new reader friendly.

I can’t speak to past characterizations but the grizzled Lone Ranger and the young, reluctant Green Hornet do work despite being a stereotype we’ve seen before. They are an opposites attract pairing but because they are family and because the Lone Ranger is there to look out for Britt. Uslan also doesn’t make this older Lone Ranger a grump. There’s wear and tear but he’s not disillusioned. Instead, you can still see the hopeful guy in there who’s coming out more to help Britt become the man he can become.

The writing fails in a couple of ways. There isn’t enough motivation for Britt to take up the fight with the Lone Ranger. He’s supposed to be a wayward rich kid with no idea what he wants to do. He just suddenly knows how to fight and decides to take up a fight that isn’t really his in a world where Eliot Ness exists. Also the elephant in the room is again, the person of color sidekick who’s there to do nothing more than help the white hero. Kato does nothing here and it’s really a shame. He and Tonto’s characterization have always been something to that turned me off these old properties and it’s still lingering here.

Giovanni Timpano’s art falls in line with a lot of what I’ve come to expect from Dynamite. The pencil work and inks are really clean but the characters can sometimes be a little to expressive. There are a couple early scenes with kids where their faces are a little creepy. There are some dynamic sequences with Lone Ranger as an old man that almost feel like a John Wayne movie where he gets fed up and does something despite probably being too old to do much. The flashback action scenes really move well and don’t veer into unbelievable territory. It’s definitely stylized but it still feels like something you’d want from a Western series. The work on the settings are well designed but the coloring by Patanzis doesn’t change enough for my liking. I think the flashbacks could have been a bit more washed out and retro but it’s not altogether bad coloring. There’s good depth to each page and the tone feels right.

All in all, “Lone Ranger/Green Hornet” #1 is something fans of these characters will really enjoy. As for me, I don’t know if it’s enough to draw me back but it’s not a poorly executed comic book. It just comes down to your own investment in this duo and whether or not you’re looking to get invested. I don’t know if the plot grabs the uninitiated enough but it makes a valiant effort.