It’s not easy being a fan the Legion of Super Heroes. Despite a long history riddled with critical acclaim and spikes in popularity, DC’s futuristic team of lads and lasses has never managed to grab a permanent foothold in fan consciousness. As a result there have been a number of wildly unique and interesting revamps in Legion publishing history on which fans can hang their hats on.

For instance, my love of the Legion was kindled by the post-“Infinite Crisis” reboot of the Legion, spearheaded by Brad Meltzer and Geoff Johns in “The Lightning Saga.” This story is followed by the “Superman and the Legion of Super Heroes” arc in Geoff Johns’ “Action Comics” run and “Final Crisis: Legion of 3 Worlds,” forming a loosely-knit trilogy. These stories not only brought the classic Legion into the 21st century, but in typical Johnsian fashion, realigned the varying Legion reboots into a cohesive mythology. In a series of three reviews, I plan to return to this special time in history, special for both the Legion and DC Comics in general. If you’re new to the Legion or, like me, you just want to revisit a great story, come along as we ride the lightning. 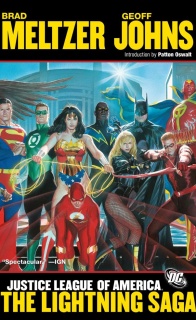 Two of DCs biggest crews of superheroes–the Justice League of America, featuring Superman, Batman, Wonder Woman and more–and the Justice Society of America, including Hawkman, Wildcat and others join forces in this stunning graphic novel! The JLA has discovered that several members of the Legion of Super-Heroes from the 31st century are in the present. With the help of the JSA, Superman and his team must track down all seven Legionnaires to discover why these heroes of the future have traveled back in time!

With callbacks to “Crisis on Infinite Earths,” classic Legion stories, and the Justice League/Justice Society crossovers of yore, this story is one that’s very much rooted in the past. The concept of legacy is at the forefront, with multiple incarnations and interpretations of archetypal characters co-existing on the page. At the same time it’s very much a product of its time, with lots of brooding narrative caption boxes and serious re-envisionings of goofy Silver Age concepts.

For those who are unfamiliar with the Legion of Super Heroes, they can quickly be summed up as a group of brightly clad and quaintly named youths from various planets that band together to create what is essentially the Justice League of the 30th and/or 31st century. Over the years the lighthearted stories of folks like Lightning Lad and Bouncing Boy have given way to darker tales as the characters, and their audiences, grew and matured. The Legion proceeded through a number of reboots and relaunches, but it always held onto the same core values. That led to yet another reboot in the wake of “Infinite Crisis.” While previous reboots had started the Legion over from scratch, “Ultimate” style, this one took them back to the start, reintroducing the original incarnation of the Legion that had been missing since the original Crisis.

In a lot of ways, “The Lightning Saga” is the weakest of the three stories making up the “Legion Trilogy,” for several reasons. First, it’s the only one lacking a cohesive creative team. Crafted by two writers and a myriad of artists, this first chapter is somewhat lacking in narrative and visual cohesion. While no artist turns in work that could be considered sub-par, there is a sharp contrast between the League and Society issues. The sharp, scratchy pencils of Davis or Benes are distinct from the smoother lines of Pasarin or Eaglesham. Each caters to a different type of reader, just as the respective titles arguably did back in their times. That said, colorists Alex Sinclair and Jeremy Cox do an admirable job of creating some sense of artistic consistency from issue to issue.

Second, being a crossover of two different series, ongoing threads of both books bleed in with no direct bearing on the story at hand. For instance, an interesting subplot involving the Ultra-Humanite in the “Justice League of America” chapters has no resolution. Furthermore, some smaller plot points and relationship dynamics stand out as strange relics of the particular period in which the book was published. For example, a love triangle between Red Arrow, Hawkman, and Hawkgirl is very dependent on the state and context of those characters at the time. Another example is the hint at Vixen’s changing power set, something that is explained in subsequent issues of “Justice League of America.” And of course, the less said about the ties to “Countdown,” the better off everyone will be. While these aspects are certainly interesting from a continuity standpoint, they retroactively clutter an already densely packed story.

I mean it when I say this story is dense. With three teams consisting of a combined thirty characters, this book is packed to the brim with meaningful and nuanced interactions, histories, and developments. It nearly takes the equivalent of PhD in DC Comics history to parse out all of the nods and easter eggs that Meltzer and Johns pack into this story. Such dedication is rewarded, however, with each discovery more exciting and rewarding than the next.

The long history between Superman and his friends in the Legion is given new weight and legitimacy, as seen in the wonderful exchange between Clack and Bruce; “You were kids.” “No, Batman. We were Legion.” Johns and Meltzer lend a level of emotional gravitas to a concept that is, at its core, very silly. This stripping away of innocence is a big part of this incarnation of the Legion, though there’s still an endearing nobility and camaraderie that remains at its essence.

While this is definitely a Legion story, it’s also very much a story encompassing the whole of the DC universe. The stakes and tone are on a level that rivals some major events, with ramifications that ultimately effect the DC Universe in an important way. I previously mentioned the importance of legacy in this story. For context “Lightning Saga” takes place at a point where the Justice League and Justice Society coexists. While the League of that time is fairly standard, the Society was unique in that it featured Golden Age heroes training the heroes of tomorrow. Several of these were legacy characters, including Stargirl, the bestial son of Ted Grant, and Maxine Hunkel, granddaughter of the original Red Tornado. It’s a cast that is nearly unrivaled in modern cape comics.

While “The Lightning Saga” succeeds as a compelling character study, it is also a spellbinding mystery. Perhaps this is Meltzer’s sensibility as a thriller novelist shining through, as the story carries a pacing and tone that feels rather distinct to that genre. The plot steadily builds an uneasy tension over the first four issues, culminating in a final issue that will keep you on the edge of your seat, guessing till the very end. And what an ending it is, setting up several important stories to come, some of which I will discuss in future installments.

For all it’s flaws, “The Lightning Saga” ultimately gets far more right than not. The strong characterization and high stakes make for a gripping read that will stick with you after you’ve turned the final page, and the bevy of nuanced easter eggs gives plenty of reasons to revisit the story. I hope that, after reading “The Lightning Saga,” you’re just as excited as I am to get into the next chapter; “Superman and the Legion of Super Heroes.”