This year marks Marvel Comics’s eightieth anniversary. That’s a mind blowing accomplishment when you really think about it. Eighty years. Marvel was founded the same year World War II started! For many people, the comic publisher has been present for their entire lifetime. The moon landing? Marvel was there. The Civil Rights Era? Marvel was there. Nixon’s resignation? Yup. The construction and destruction of the Berlin Wall? They were there too. Thriller? Absolutely. That phase when every superhero had a bazillion pouches over their costume? Affirmative. 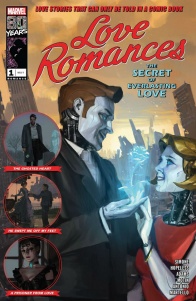 I really appreciate the idea behind “Love Romances” #1. For those unaware of the larger context, during its lengthy history, Marvel has published a myriad of different comics. Outside of the superhero genre, western comics were popular for a long while, war comics sold well as well as romance comics. One-shots like this one and the western “Gunhawks” #1 acknowledge that Marvel’s success is owed to more than just its superheroes. Releasing a romance comic like they used to feels like a subtle brag and a well-earned one at that. So by all means Marvel, take your victory lap.

“Love Romances” #1 is comprised of four original short stories, all by different creative teams. Two of the four have dashes of horror in the romance. ‘Heartbroken from Beyond’ focuses on a man who is ‘haunted’ by the ghost of his love. He’s still grieving and going through her things, the ghost appearing when he does. It’s hard for him and in the end, he packs up her things and starts to move on. The ghost finally disappears. This story makes the choice to do completely without dialogue and its the right call. Words might have bogged it down and the panels do just fine communicating the emotion. It’s always great when comic books take full advantage of the medium. A picture is worth a thousand words, after all.

Dennis “Hopeless” Hallum and Annapaola Martello’s ‘French Quartered’ is even heavier on the horror. A young maiden is trying to escape with her lover and get away from her father. A lot of dads are protective but her father has grown eerily possessive and overbearing. He locks her door at night, sits guard with a shotgun, threatens anyone who even looks in her direction and has spikes installed on the balcony. This guy is Law and Order: SVU creepy. He gets his karma though when he’s hung up on his own spikes and shot with his gun. A fitting end.

The other two stories have science fiction elements. ‘Gone Like The Wind’ follows Richie. With his girlfriend Mona, Richie decides to download his consciousness into a robot so they can be together forever. Richie’s robotic form is balding with a skimpy little mustache and his girlfriend quickly abandons him. The lonely robot powers down and wakes up in a dystopian future, falling in love with an invading alien who clearly cares nothing about him. Rebels kill the alien and Richie is reunited with a disfigured Mona who finally takes him back.

‘Gone Like The Wind’ is clearly a comedic story but the humor falls flat for me. I must note that most ‘sad-sack’ humor isn’t my cup of tea. Richie is put through over the top tragedy after over the top tragedy. On rare occasions, I find that hilarious. Speaking personally, I think the whole sad-sack, punching bag thing works best on programs like Bob’s Burgers. Yes, the titular Bob is put through the ringer but he’s given little victories at the end of the day to balance that out. On the other hand, Richie is awarded no such reprieve. His reunion with the superficial Mona feels like another loss. Comedy is completely subjective though. You may find it hilarious.

‘The Widow and the Clockwork Heart’ is written by comic book veteran Gail Simone. The story takes place in a utopian future where everyone has done away with distracting technology and the people are all about romance, all the time. Romance is so important that there are love robots (get your mind out of the gutter) for the lonely and brokenhearted.

The story follows the relationship between a human and robot as they fall deeper in love. Throughout the tale, readers are led to believe that the man is the love robot but it turns out to be the woman in the end. The gentleman has found a human love and leaves her alone and brokenhearted yet again.

This one was probably my favorite of the four. It’s just a very interesting concept. Robotic companions controlled by mysterious Gear Men. Enigmatic groups dedicated solely to romance…it’s like if the Illuminati was trying to get you a date. Science fiction has detailed several utopian futures where humanity centers on science or finding an escape from reality so a love-centric future is a unique departure. The idea is strengthened by the art work. I especially liked the Gear Man’s design. He’s surrounded by gears and cogs. He controls a futuristic robot with giant levers and pulleys. The Gear Man wears a top hat and has a metal handlebar mustache built into the mask! Humanity probably isn’t going to revert back to a Victorian-steampunk aesthetic any time soon but hey, one can dream.

Final Verdict: 6.5 – My cherie amour, lovely as a summer day…