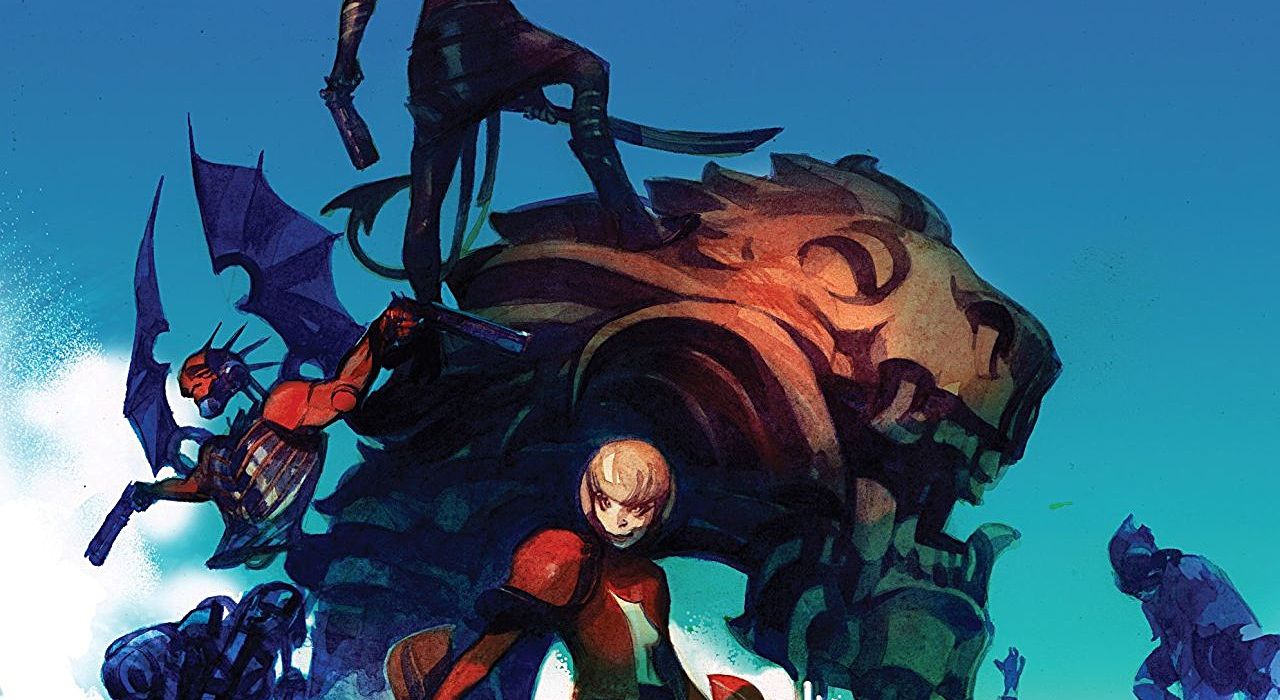 Rising from the depths of a two month delay, the finale of “Low’s” fourth arc arrives in all it’s bleak, bleak glory…just in time for it to disappear into the ether once again. *sigh.* Rick. Buddy. At least let us know in the back matter when you expect the next arc to start up again. 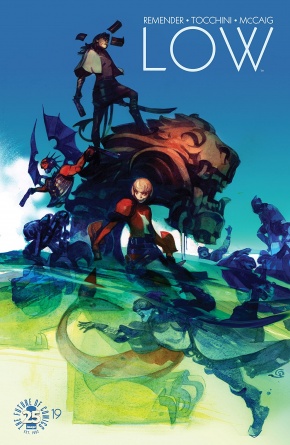 END OF STORY ARC
“OUTER ASPECTS OF INNER ATTITUDES,” Conclusion
Death comes to the drowning city as Tajo and her crew fight to inspire the citizens of Salus to not go gentle into that good night.

I’ll be discussing some important plot points for the series, so if you haven’t caught up yet, go do that. This has been your friendly neighborhood spoilerwarning.

“Low” is a series that, throughout its nineteen issue run, has constantly towed the line between a manifesto for the power of optimism in the face of an uncaring, cruel world and an admonishment of said optimism – though the long arc of “Low” bends towards the former. Stel struggles with her, perhaps fanatical, belief in its power while Marik finds his salvation (and ultimately, his death) in his mother’s optimism, after having rejected it for so long; unwittingly becoming the inspiration for many of our secondary characters as well as Tajo.

However, despair is always around the corner, waiting in the dark corners of the mind – or in Tajo’s case, in her narration boxes. Yeah, as much as I’d love to praise “Low” on its theming, it’s never expressed very subtly. Were this series framed differently, though, I think that the constant talk of the magical powers of optimism would come across as very naïve and possibly insulting to the more cynical of us. But what “Low” does really well, and is exemplified in this issue, is take optimism and show that it is a tool, not a cure-all.

The opening narration captures this, with Tajo basically saying that she cannot find it within herself to see the world as her mother does, as a good place. Instead she sees it as it currently is – dirty, crowded, and filled with a smoke that is slowly choking everyone to death. This depiction in only strengthened by Greg Tocchini and Dave McCaig’s art. The panels are always claustrophobically close to the characters, boxing them in, and when we get out into the open, there is always a smog overshadowing the city. Artificial oranges and blues bathe the inner corridors while greyish-greens and varying shades of blue-greys color the outside. Yet, even with all the smoke and claustrophobia, mostly everything is clear and easy to see.

I’m going to level with you; this is a difficult series to talk about issue to issue. This is due to a couple of factors, most notably the delays I admonished Rick Remender for at the beginning of this review. While the first three issues of this arc came out March through May, the previous arc ended last August.

So, in one year, we’ve had four issues and, for a story as decompressed, intricate, and thematically focused as this one is, that is not good. Maybe if this had come out in June as originally planned, I would be less confused but as it stands, I desperately needed that recap that came at the beginning of the issue to understand both this arc as well as the important series plot points at the moment.

Also, this issue, while wrapping up the arc rather well, ostensibly forwarding the plot by having Salus go flying up towards the surface in order to refill on air, leaves me feeling unfulfilled within the context of the larger narrative. We still don’t have any closure on Della (is she alive, is she dead?) or what has happened to Stel and the surface. Hell, I can’t even remember the last time we actually saw her. Again, were this series to have kept up a good, monthly schedule (even with a couple month breaks between arcs) the flow would have felt more acceptable.

I know I’m harping on this instead of talking about the actual issue but, really, this is the crux of the problem. Remender’s writing is strong, giving us clear characterization of all the people and the things they are struggling with and, as I spent the first half of the review talking about, the themes are expressed through our Caine leads, with the secondary characters acting as optimism batteries. They’re charged up by Marik and Stel, allowing them to be deployed to recharge Tajo when she begins to fall.

The art, as mentioned earlier, is also still very good. Possibly because of all the breaks, the art has stayed very consistent throughtout, though there are times when characters look way too similar to each other (such with the mer-person whose name I cannot remember and Tajo in the helm suit). Additionally, Tocchini’s art sometimes feels like the pages were drawn on wider pages and then squashed in order to fit into a regular sized comic book.

However, this doesn’t detract from the emotion he is able to portray nor from his use of dynamic paneling. During the Tajo’s big speech, he builds tension by making the panels flit back and forth between vertical and horizontal rectangles, getting smaller and smaller as we approach the bottom right of the page. It makes the event feel more intimate, getting us closer to the people and slowly ramping up the speed at which we take in each new panel, finally culminating on the next page in a big panel, marking the grand end to the speech. You can feel the weight of it just through the panels.

Additionally, the three panel sequence when Tajo succumbs to her regret at being unable to protect Salus feels raw and you can see her anguish drain her of the will to continue fighting. This is also another one of those thematic moments, which is really the driving force behind the comic. The plot and the characters take a back seat to the themes, for better or for worse.

I realize this review has been a little all over the place but that’s because “Low” is a series that is about ideas and, as such, in my opinion, best critiqued in movements. Arc by arc. Book by book. The plot takes its sweet time to move so its hard to grasp it month to month. Maybe that’s the sign of a bad comic but Remender and Tocchini have created a world that is so engrossing that I don’t mind the confusion – what I mind is the wait.

Final Verdict: 7.3. A good end of the arc that would have benefitted from coming out closer to the previous issue.