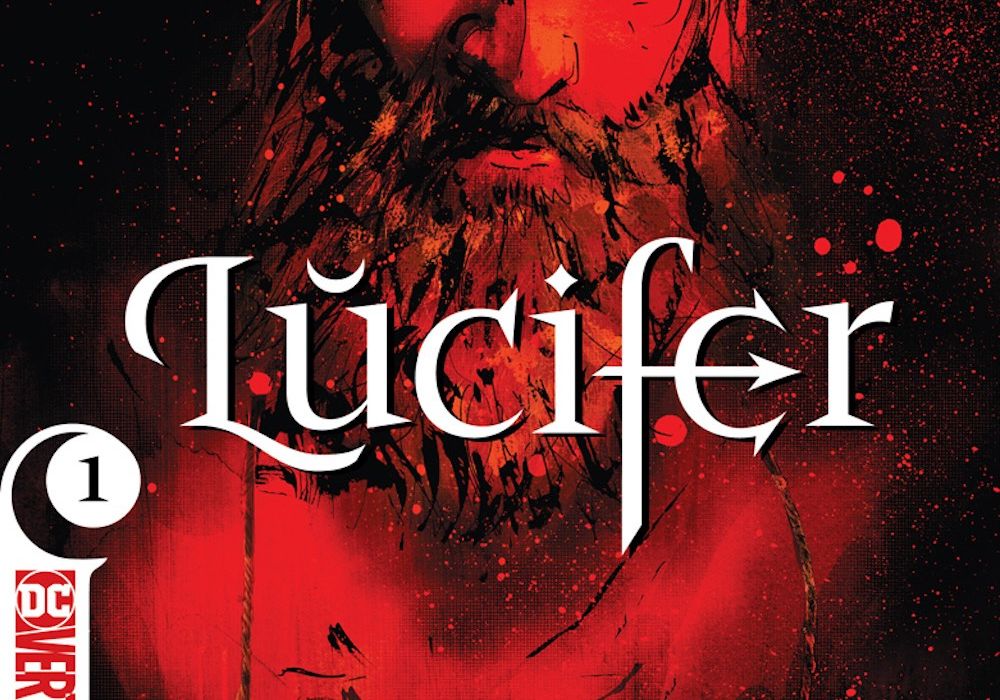 The Sandman Universe is a fascinating, expansive world. This week marks an important new debut for the line with “Lucifer” #1.  With so much attention to the property that requires a really unique, niche tone, it is going to be difficult to get the series right. Does the new “Lucifer” #1 deliver on the promise of The Sandman Universe and escape the shadow of Neil Gaiman and Mike Cary? 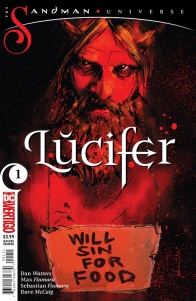 Lucifer is missing. Having embarked on a dangerous journey to find the mother of his abandoned son, the Prince of Lies finds himself imprisoned and crippled by mysterious forces who seek to torment him for their own terrible ends. Meanwhile: a car is crashed, two witches blind themselves, a tumor speaks its first words, and a perfectly good bowl of oatmeal is left to go cold.

When readers open the pages of “Lucifer” #1 the first thought that will come to mind is undoubtedly the striking imagery and panel composition of each page. The star of the issue is author Dan Watters’s quirky personality from the script which is expertly channeled through the illustration work of Max and Sebastian Fiumara along with Dave McCaig’s eclectic color palette. The Fiumara’s imbue their pencils with lots of personality making sure that each character has and interesting secondary action. The illustration work in the issue also looks incredibly sleek and polished while conveying a fluid sense of motion.

The Fiumara interior work is also experimental above all else. there are the sleek bells and whistles of good mainstream comics like panel bleeds and nine-panel grids. These comic book techniques are executed fluidly in “Lucifer” #1 via a manner that is easy to follow. There are also small flourishes in the artwork that allow for a better overall reader experience. One such example is how McCaig changes his palette when switching between the protagonists of the story. “Lucifer” #1’s script is so ambitious that the wrong artist could have compromised the nature of the story. The Fiumara’s specialize in action sequences and this issue only has a couple outbursts of demons and action.

Watters’s approach to the script is as inventive as the pencils that Fiumara brings to the issue. The eclectic nature of the story and the different narratives is engaging and fascinating to watch unfold over the course of the story. Watters’s script threads a small needle from the opaque and mysterious tone of Gaiman’s original “Sandman” stories with a bleak sense of humor and outlook. The modern-day suburban touches of the story clashing with fantasy is a redundant story concept executed impressively well in the context of the issue.

Watters’s script is focused on the two very personal narratives that each take a dark turn towards the end of the issue. Comparing and contrasting this pair of stories and figuring out how they relate to each other provides the issue with a lot of depth. The moment where one story directly intersects with “Sandman” mythology is a particularly breathtaking sequence executed impressively well. Returning readers familiar with the mythology will definitely be able to understand more about the series than new readers, however, the issue offers a clean entry point for both fans and serves as a solid reintroduction of the property.

Upon hearing the announcement of the line, most readers were likely concerned that this line of comics would use the Sandman mythology as a crutch instead of moving forward with a new story. “Lucifer” has a creative background that mirrors several other tales while staying grounded and giving readers two protagonists who they have a firm incentive to care about. It can be difficult to keep focus between two different stories yet this issue shows an intentional mirror between the narratives. Both leads learn too much about their surroundings which compromise their way of life. The story also has a call out to the original “Sandman” series in terms of the overall structure of the comic.

“Lucifer” is a curious property to relaunch yet again. However, DC and The Sandman Universe line appear to have something fascinating to say about the character. Anyone interested in fantastic, fluid artwork owes it to themselves to explore the polished interiors that the Fiumara’s contribute to the story. Making a comic look unconventional and clear is an impressive achievement in comics. The issue also features a pretty spectacular cliffhanger that will undoubtedly hook readers into picking the next installment of the title. The debut issue of “Lucifer” is a clever way to reintroduce the franchise to a new generation of readers.

Final Verdict: 8.8 – “Lucifer” #1 excels thanks to an excellent set of pencils paired with a grounded script and sharp sense of humor.