Join Lucy in a world of pure imagination in the new series from Boom! Studios. Read on for our review of “Lucy Dreaming” #1, which contains mild spoilers. 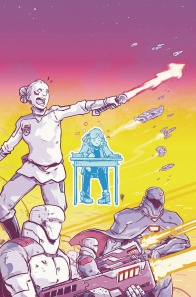 Max Bemis (Moon Knight writer and lead singer of Say Anything) and Michael Dialynas (The Woods) present a sweeping, coming-of-age fantasy about living your dreams—literally. In her dreams, Lucy is the hero of all her favorite stories, living each night as a grand adventure. These journeys will teach her more about herself and the real world around her than she ever expected.

We’ve all had that time in our life where we wished with all of or hearts that we were someone else, where the life we had was, for some reason, not the one we wanted. For most of us, that time is called Being a Teenager, and that’s exactly how Lucy feels too. This latest mini series from writer Max Bemis and artist Michael Dialynas looks at the existential angst that comes with being an awkward teen that doesn’t fit in, and sees what would happen if you gave a thirteen year old everything they thought they wanted.

Rather than this just be a case of Lucy daydreaming her way into wacky adventures, “Lucy Dreaming” lets us know by the end of this first issue that there’s a lot more going on than that. After a first act that allows us to see deep into Lucy’s thoughts via her offline blog (too judgemental to publish it, too pretentious to just call it a diary), the issue takes a sharp turn into her very real dream, one she’s finding it hard to wake up from. Thrust into an action-packed sci-fi world that’s legally distinct enough to not get sued by Lucasfilm, there’s fear, pain and confusion as Lucy is no more, and in her place is Princess Eleanor Fadarr, Legendary War Princess of Y’or.

Both Bemis and Dialynas are keen to lean into the slapstick absurdity of the premise in a way that gives “Lucy Dreaming” a vibrant energy. Lucy’s narration is verbose and dramatic, exactly like a pretentious thirteen year-old’s diary would be, but when she’s thrust into the ludicrous situation aboard the Huxley – pride and joy of handsome space scoundrel Barc Landin – then her pretention drops, and in its place is straight up realism. Her hilarious reactions are pitch perfect for the situation she finds herself in, and that honesty in the scripting endears the central character to us in a way that the first part of the book may not have. Lucy went from being a normal outcast teen to a war princess about to die on an alien spaceship, and the absurdity of the circumstances is not at all lost on her. She freaks out, and it’s to Bemis’s credit that he’s able to write a script that’s both funny and grounded while still being about a fantasy sci-fi body swap.

Dialynas has a super expressive cartoon style, that leans into the exaggerated humor in a way that makes the book sing. The “dreamworld” in which Lucy finds herself is heavy parody of Star Wars, and the only way to deal with that is to lean full-on into it, which Dialynas does with terrific flair. There’s some great design work, especially on the Vader-like enemy General Rathe and Landin’s short alien sidekick, and the color palette of neon blues and yellows adds a stark contrast with the relative realism of Lucy’s real life.

There’s a fantastic opening page that gives a full splash of Lucy, her face contorted into wild glee as she explains the fantasy novel she’s reading in all its gory detail to her bewildered parents. It’s a great way to open the book: centered on Lucy to let us know exactly who this series is about, and having her give this over the top, graphic speech to let us know she’s not your average thirteen year old. There’s even a “School is Overated” post-it note on the fridge behind her, just to drive home her anarchic nature.

Later on, when Lucy is in her dream/nightmare, there’s a fun page that cleverly and hilariously subverts both our and Lucy’s expectations. Grabbing a futuristic pistol, Princess Fadarr unleashes a flurry of white hot laser beams (complete with “Pew! Pew!” sound effects) upon the enemy alien soldiers. Rather than seeing them fall to the ground relatively intact – except for maybe a smoking hole in their armor – they are viscerally and graphically ripped apart, in a way that shows exactly just how realistic and dangerous this world is. Bemis and Dialynas play this for maximum humor, however, with a gross yet darkly comical interaction between a dying soldier and Lucy. Dialynas especially goes all out with the slapstick gore, contrasting that with Lucy’s exaggerated expressions as she realises what she’s done.

By the end of “Lucy’s Dreaming” #1, Bemis ensures that we’re given just enough information to really widen the scope of this story. Rather than this being about Lucy having a freak occurrence, there’s a much bigger story yet to come, one hinted at in the dream itself, but then taken to a tantalising cliffhanger on the final page. “Lucy Dreaming” #1 is a rich, funny debut issue with charm, a hint of worldbuilding and a fully realised central character to hang it all on. It’s also a gorgeous looking book with art that takes everything from teen high-school angst to epic space battles with ease. Fans of Skottie Young’s “I Hate Fairyland” or books like “Lumberjanes” won’t want to miss this.

Final Verdict: 8.8 – A fun and funny start to an engaging fantasy adventure.