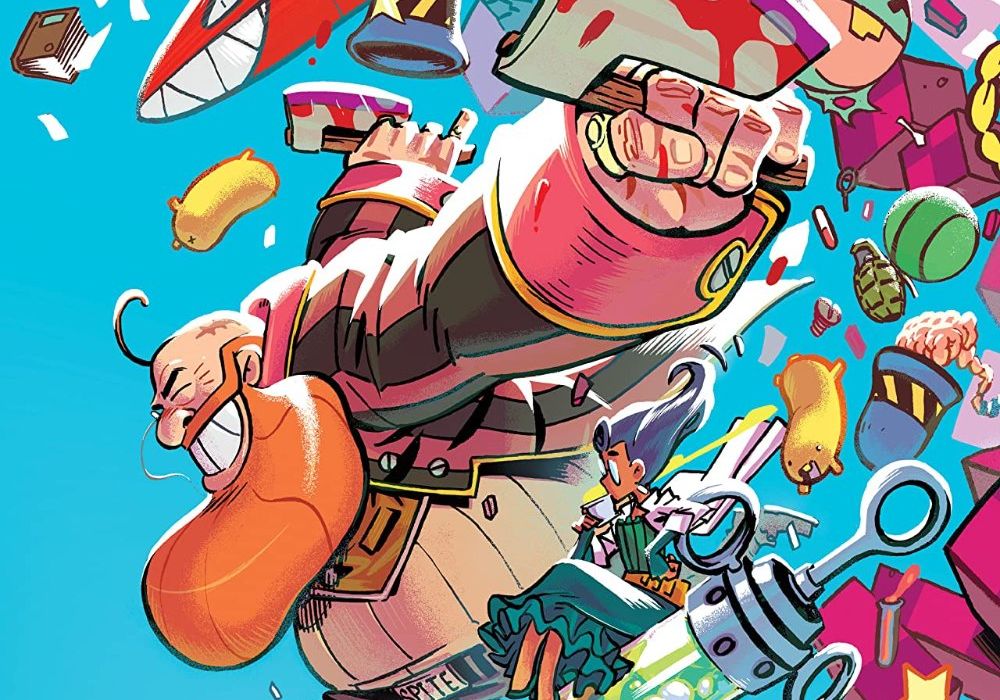 Kieron Gillen has been doing a lot of big-time serious work lately. “The Wicked + The Divine” and his latest ongoing, “Die”, are all well-conceived worlds and stories, but can feel particularly heavy even at the best of times. So, having a book like “Ludocrats” makes sense for Gillen. The first issue, accompanied by Jim Rossignol, Jeff Stokely, Tamra Bonvillain, and more, was a wild ride of a debut. Does that momentum carry over into the sophomore chapter? 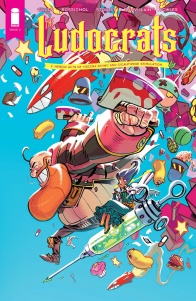 How could we follow the startling first issue of LUDOCRATS? With issue two. Sometimes it doesn’t pay to overthink these things. Herein, stuff of a ludicrous and oft entertaining character happens.

This time around the story is structured like a classic heist plot. It’s a bit of a slippery slope to start off, with some of the ramifications of last issue lingering around to no avail. Otto has a brief period where he’s lost his memory of the night before, and it ultimately feels like filler, not really serving anything other than some faux-posh humor that falls a little flat at this stage in the comic. Once Professor Hades refreshes Otto, the plot starts to move a bit more, but due to Otto taking up a lot of dialogue real estate, it still feels plodding. Otto’s grandiose, haughty-taut vocabulary comes off as a little dry when there’s not too many people for it to bounce off, so thankfully, once the other members of the heist arrive, the ball finally starts to get rolling.

This is where Gillen and Rossignol are at his most Jack Kirby high concept stage, throwing bizarre ideas at the reader every page like they were nothing, but infused with Monty Python-esque British humor. The reveal of Shoggod Muir is a great reveal to recapture the reader’s attention, and then the plot gets into full heist mode. The writers make this a lot more enjoyable because there are lots of opposing voices pitching in and coming up with their own ridiculous contribution to Otto and Hades’ plot. The approach to this is very movie-like, with each character’s narration of their plans taking place whilst everything is occurring in real-time. Voldigan the Perfidious’ voice and plans are one of the most enjoyable since Gillen and Rossignol give him a very chaotic neutral tone that works well for the balls-to-the-wall pacing. This is punctuated brilliantly with his quote mid-planning “I pride myself on being as physically flexible as I am ethically”. The issue ends well with a great twist on the damsel in distress trope that comes as a genuine surprise with a tonal shift.

Stokely’s art is a lot of bouncy, buoyant fun that fits fantastically with the anything-goes feeling that the script provides. His character work is the big highlight here, considering it is given the most attention to detail out of everything on-page. As with last issue, Stokely’s characterization of Otto is super performative and makes me like him more than his actual dialogue does. The fact that he starts off this issue literally naked gives him infant-like energy, passionately smashing and yelling at the environment around him, and that sets the tone for his characterization perfectly for the rest of the issue. Each other character has a very distinctive manner that they occupy space too, which on top of their already distinct designs, makes them feel even more unique. Voldigan saunters around like a reserved bureaucrat, and Elaina struts her stuff like a rockstar, and I love them both for that.

The way that these characters interact with the space around them has a frantic and chaotic feeling, again serving the tone of the narrative nicely. With the number of times that we seem to see Otto jumping around through the air, you would think he’d have a weightless quality, but Stokely manipulates his massive arms and upper body cleverly, making Otto’s body language give him a real sense of heft as he moves. When we move into the heist section of the plan, seeing the zombie guards clamor through a doorway that looks like it’s about to burst a la Loony Tunes is a great way to depict a sense of momentum, too. The latter half of the book also does this well, as the gang launches a giant egg canonball-style from the Gigantopede. The launch has a great quiet comedic build-up that pays off well, with Stokely drawing the shot with a great eye for scale and speed. My only problem with these shots is that sometimes the environment is too neglected, and panels that only feature characters on a negative space can feel a little more boring considering the rest of the page might only have light detailing.

The coloring from Bonvillain is a massive part of what gives “Ludocrats” such a freewheeling, bouncy tone. The palette is filled with candy-like vibrancy, with everything from Otto’s beard to Shoggod Muir’s neck-chain having a charming, shiny quality to it. These moments are fine on their own, but the simplicity of them makes scenes like Hades using the Sonic Cannon on Otto really pop. That specific scene has a very psychedelic, 60s movie-poster-background vibe to it, which works great to emphasize the silliness of the moment. Even the way that the residual smoke from the cannon has that same crayon-like green color gives a great sense of continuity and determination to stick to the gag. One of the final shots combines these two palette moods well, where Gratty is lamenting the loss of her Gigantopede and the Lovecraftian tangle that has burst from within it. Bonvillain fades the sky from a pleasant blue to a hazy purple, and the shading becomes more smudged and textured the closer it is to the beast, which is a great touch.

“Ludocrats” #2 comes off as a little self-indulgent at times, with some of the overly pompous dialogue falling flat on its own. Once it really gets moving, however, it’s a raucous, fun experience. The characters balance each other well with distinct personalities, the action is silly and over the top, and the art reflects all this in its own right, with frantic buoyancy and candy-cane color palettes. It’s not perfect, but it’s a heck of a fun time.

Final Score: 7.1 – A little rough on the edges, but “Ludocrats” #2 continues with the same ridiculous fun that the debut issue exploded with.