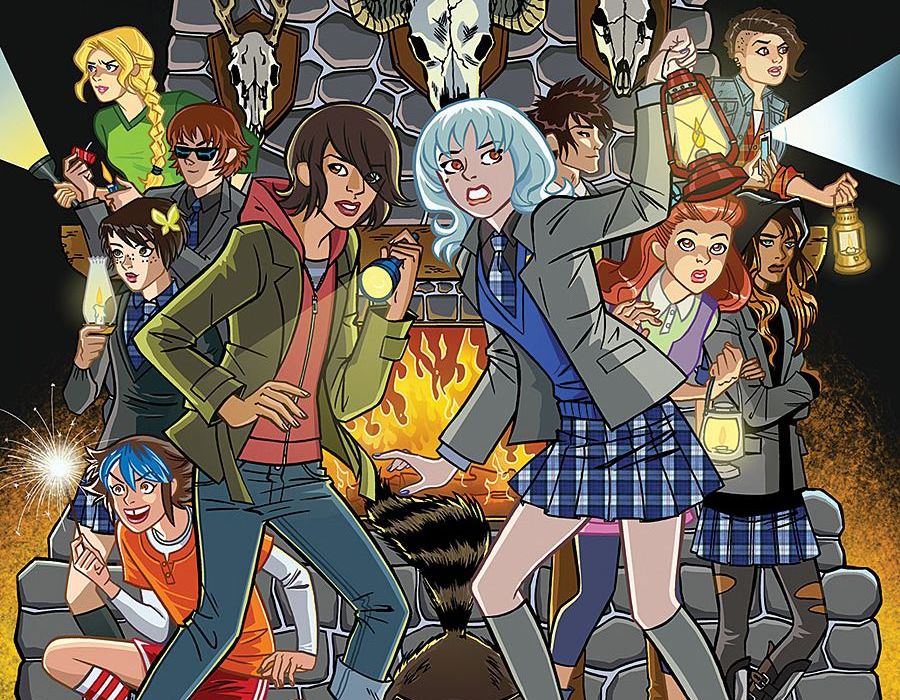 The crossover of the year is finally here. The kids of Miss Quinzella’s Camp for Hardcore Lady-Types and of Gotham Academy’s Detective Club team up to solve a mystery. Fun ensues. How much? Let’s find out! 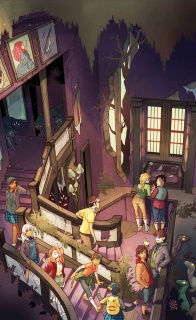 What’s to Love: We adore DC’s Gotham Academy and it’s been on our wish list to have them somehow meet the Lumberjanes. From the great characters to the fun stories, we saw a world in which these two groups could coexist. Fast forward and here we are—the crossover event we’ve dreamed about and can’t wait to bring to you! What It Is: Something sinister is happening at a mysterious building deep in the woods, drawing the Lumberjanes and the Gotham Academy kids separately to investigate. Is it a weird cabin? An abandoned asylum? The two groups band together to find out what exactly is going on. Featuring a connecting subscription cover by Kelly & Nichole Matthews (Toil and Trouble)!

Note: I’ve only read the first volume of “Lumberjanes” to get familiar with the property for this. Very much coming in as a “Gotham Academy” fan. Don’t crucify me if I missed a Lumberjanes reference.

Listen, let’s just get it out of the way: This book is all about having fun. It’s taking chocolate and peanut butter and mixing them together while tasting better than that confectionary combination I described. It’s a little break (or more of an extended break, considering “Gotham Academy: Yearbook”) from their main narratives to tell a fun team-up story. And that’s not a bad thing! Flores and Valero-O’Connell know exactly what they want to go for with the crossover and they do it. With Professor MacPherson gone missing, the Detective Club head off, following the clues and stealing a car (because that worked so well last time) and heading on a road trip. Coincidence of all coincidence, a camp counselor goes missing as well, further inciting the inevitable meet-up.

Being the first issue of a crossover, naturally this is more about setting up and introducing characters to audiences that may only know one or the other. As such, this issue could get a bit wordy at times (although I will say, letter Warren Montgomery does a real good job of making sure dialogue flows well). Flores manages to pull it all off with this cast of nearly a dozen, especially in the small things. From Pomeline’s snark to April’s puns to Maps’ inquisitive and imaginative nature and Ripley’s hyperness, most of the characters get a good chance to show who they are.

Now, the question is: In these crossovers, what is the best meet-up of characters, which pairing has the best interaction. Which of these very different personalities mesh the best with one anot–

Oh, come off it: It’s the meeting between Maps and Ripley that is the best part of this issue, as if it was going to be any other. It’s amazing how quickly these two fall in sink when danger befalls the group. In fact, Maps’s is the one out of all the Detective Club that fits in so well with the Lumberjanes, although she does show a slight bit of overconfidence when trying to retrieve her map that puts her in danger. Enter the awesome Ripley with Swift New Friend-Protecting Action and the two are on the road to being the best in this series.

But what was going to make or break this book for me was the artwork. Now, I can see how one would compare “Lumberjanes” and “Gotham Academy”. They’re both all-ages and female and LBGTQIA-friendly books (or at least I’m hoping on GA. Waiting for the confirmation of gay Colton, pan Kyle and non-binary Maps in “Second Semester”, team!) that focus on two groups of teens in similar yet different environments. That said, there is a slight difference in tone. “Lumberjanes” has a bit more comedic beats in it and can slip into that younger anime-esque hyperness (again, only read volume 1! Put down your torch) whereas “Gotham Academy” has a slight grounding to it (well, grounding for Gotham. There is still a giant friendly lizard man in the first arc) underneath all the spooky fun mysteries.

With all that in mind, Valero-O’Connell, inker Maddi Gonzalez and especially colorist Whitney Cogar met the task of balancing those two types of tones. There is a kind of wispiness to how the characters are drawn that is capable of encapsulating a lot of subtleties to the characters expressions. This was especially prevalent with Jen’s expressions as the Lumberjanes try to convince her to let them help look for Rosie. The worry for Rosie conflicts with her desire to keep her charges clear is so evident on her followed by the inevitable resignation that these kids are going to help whether she likes it or not.

But as I said, just as important as the pencils and inks is the coloring. Coloring is such a major importance to both these series and Cogar nails it. She manages to hit that kind of Victorian Goth for young adults gloom Gotham Academy (of note is when there is no background save color, where Cogar is able to express character emotion like the deep purples for Olive) has in one moment while immediately able to jump into the verdancy of the forests. And she’s not afraid to turn up the spooky with the use of shadow and glowing when the (very polite) skeleton ghosts show up.

We have seen Crossovers in the past end up being particularly bland. I remember the last one I read, between Doctor Who and Star Trek: The Next Generation being particularly so. That said, the creative team show such a wonderful love and respect for both “Lumberjanes” and “Gotham Academy” and is able to understand why we like these characters. For “Lumberjanes” fans, this is a great extra treat. For “Gotham Academy” fans, a real good holdover as we await “Second Semester”. Hoping beyond hope that this crossover helps both franchises in the long run.

Final Verdict: 8.3- A well done start to a crossover that oozes fun.