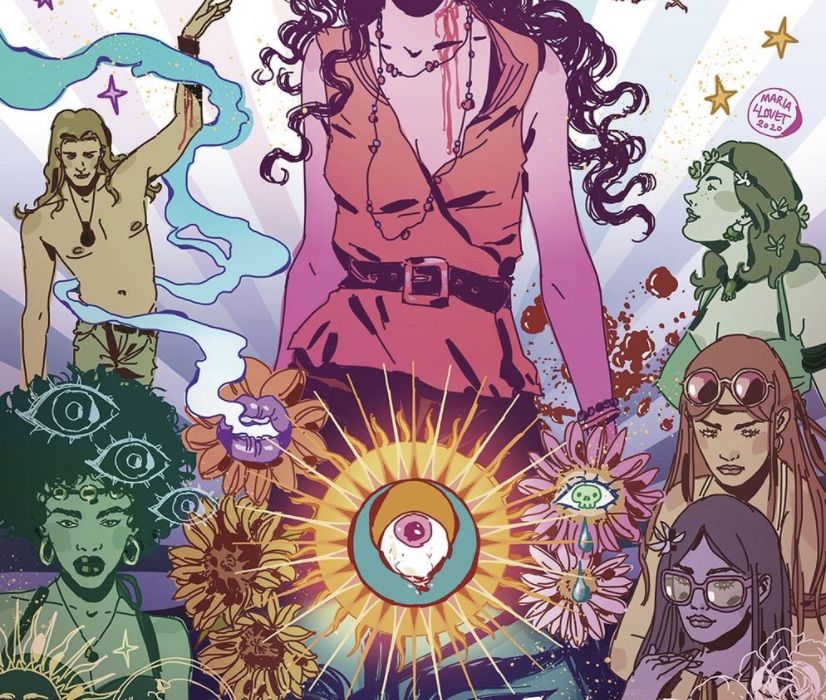 “Luna” #1 mixes psychedelia with prophecy for a heady, if esoteric, first issue. Warning: spoilers ahead. 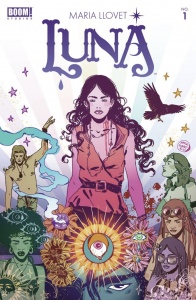 Cover by Maria Llovet
Created by Maria Llovet For fans of “Faithless” and “Die” comes a new dark thriller from acclaimed writer & artist Maria Llovet about a young woman named Teresa, who’s plagued by prophetic dreams that connect her to something powerful, something…divine. When Teresa fatefully crosses paths with the Family of the Sun, she believes them to be exactly what anyone else in the late ’60s would expect – a hippie cult whose leader claims to have met the divine. But secret blood rituals, powerful drugs and sex runneth amok will bring Teresa face-to-face with the truth about the Family, herself and the dark secret behind her dreams. Immortality, magic and alchemy, and the true power of enduring love collide in this new series for Mature Readers.

“Luna” #1 features Teresa, a pseudo-ingenue whose van crash in the desert leads her to a small Summer of Love cult, a mysterious cave and a potential link to her strange dreams. Llovet crafts a comic full of lush, feminine imagery and occult promise, but some of the dialogue and narration break us out of the comic’s flow.

Llovet’s art is the star of the show in “Luna,” as in most of her work, but the meta-plot might be a bit too sparse or buried so far. The narration in particular is what may confuse, and the first three pages are an excellent example of what Llovet is going for and doesn’t always achieve later on. We open on Teresa, dazed and bloodied outside of her van, with a simple recap to orient us. The next two pages are a lovely rainbow splash and feature a pair of eyes bottom center. A strange, lyrical bit of text is spooled out over several narrative boxes. Juxtaposing mundane and esoteric storytelling is a good way to signal that we might not need to understand everything just yet and ties us to Teresa’s POV and journey. However, there’s not enough of a definite narrative break between our current reality and these visions as the comic progresses, and everything gets hazy. Llovet likely intends to blur reality lines here, and it will work for some readers considering this is a first issue. We’re as much meant to dig the vibe of the book as we are to ground in tangible plot movement.

Llovet has a great grasp of what we need for a visually stimulating experience, but some of the writing lets it down. The best example of a fluid transition between waking and dreaming life is when Teresa visits the oasis. Here, we get to see Llovet’s command of color and comics anatomy at its finest with some tight narration. Llovet uses a four-strip page: strip one is a single panel of Teresa splayed on the grass, strip two is a triptych of her hands gesturing to the sky, the earth and the grass, strip three is a long profile shot of her framed by the grass and sky, and strip four pulls out in a wider triptych to show her and Donna, the desert cliffs and a silhouetted bird circling in the clouds. Llovet slows down the action to evoke physical sensation and emotion as Teresa, in a callback to her more traumatic sprawl on the first page, relaxes into the earth and experiences the fullness of nature. Llovet goes for a tighter line here as well, and the hand-drawn panel borders and subtle coloring outside of those lines balances the finer detail we get. We’re meant to sense that Teresa’s at rest and in a particular kind of flow state that evens her out, but that it likely will not last.

The color palette is springy and light, and the page turn starts drawing us into deeper, vivid hues with the earthier tones of the cave exterior and a red wash that signals a vision as much as the gutter doodles at the bottom of the page. The page after is done entirely in midnight hues, with black gutters and sketchier panel borders to signify that Teresa’s seeing something strange. However, the dialogue almost destroys the otherworldly effect because it doesn’t match the lofty tone Llovet uses in previous visions. This inconsistency continues through the rest of the issue, and the scene would likely work better without any dialogue at all.

Some of this inconsistency is also down to the lettering. While Llovet’s hand-drawn sound effects are integrated into the art and feature very well, the font feels almost too clean. Llovet’s loose line and attention to detail means we have a definite aesthetic that the font won’t necessarily enhance, but it feels too sharp – and too black – against Llovet’s sun-detailed captions. Similarly, Llovet’s thicker balloon stroke makes the font feel spidery and almost pasted onto the page. Though it’s a tall ask for a monthly comic, hand-lettering would go a long way toward sealing the experience here. We do see a bit of hand lettering as Llovet’s signed and dated each page, but this is also a detail that doesn’t do much for narrative cohesion in a published comic issue.

Overall, Llovet crafts a stimulating art experience, but uses dialogue and narration that don’t always support that experience. We expect a sing-song, conversational tone from the cult members, but that tone doesn’t always work well when we’re inside Teresa’s dreams and visions. If we’re going for an acid-trip-style vision we don’t always need words to guide us, and Llovet’s more than capable of delivering art that can tell that story. Nevertheless, there’s something (or someone?) in the cave on the final page turn that will likely entice most, if not all, readers to continue into the second issue.

Final Verdict: 7.5/10 – “Luna” #1 dazzles with lush art and narrative promise, but some dialogue and narration is inconsistent enough to detract from a seamless, trippy experience.