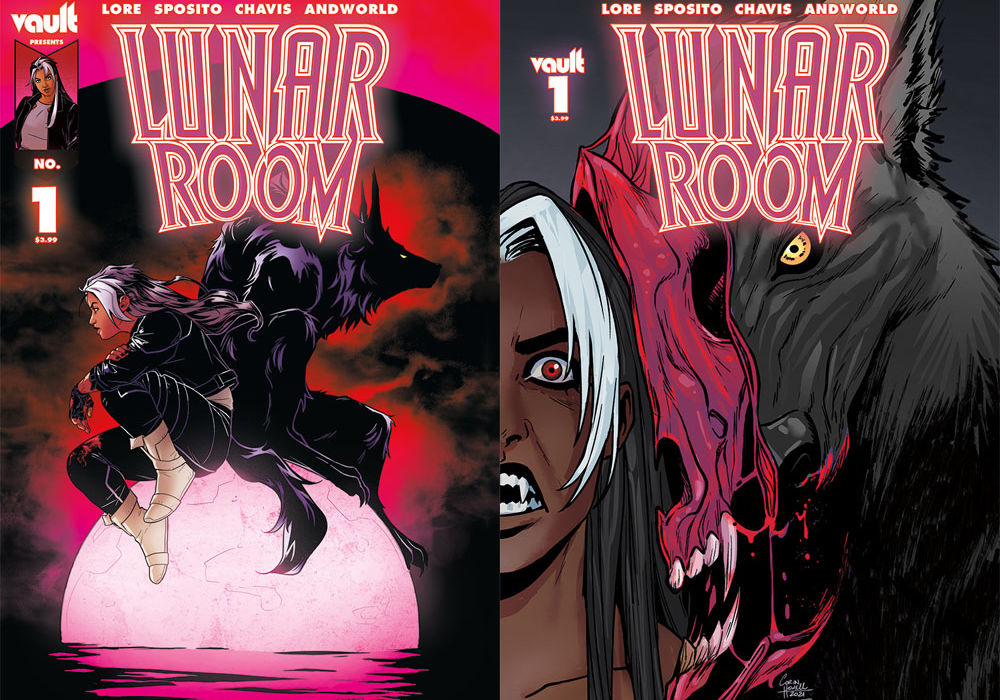 Anyone who is a fan of genre fiction will inevitably come face to face with the argument of which is better: fantasy or science fiction. While the two have some pretty noticeable differences, both do a wonderful job of exploring the human condition in extraordinary circumstances.

However, over the past couple of decades there have been several attempts to combine the two genres in new and interesting ways. Games like Shadowrun and novels such as the Jim Butcher series have done a fascinating job of combining ancient fantasy with modern tropes and/or futuristic technology.

And now we get to see Vault Comic’s latest offering with a techno magic, sci-fi fantasy thriller from author Danny Lore and artist Giorgia Sposito. It’s called “Lunar Room”, and let’s dive in and see if it has anything new to offer the realm of the fantastic. 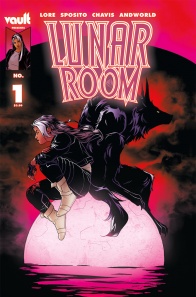 Cynthia “Sin” Breaker used to be a lot of things. A werewolf. A mob enforcer for a powerful mage. A name feared on every street of Solar City. But now she’s forcibly retired from all those things, trying to get over her past job and past loves.
Zac Zero is a mage with their own agenda, and right now, item #1 is to hire some protection. Normally, Sin wouldn’t look twice, but Zero may have the key to getting back the most important thing she ever lost: herself.

Zac Zero is a mage who has decided to cause an extraordinary amount of chaos and steal a portion of a magical blade which is stored deep in the vaults of Solar City’s most important magic academy. While his motivations are unknown, the fact that his twin brother just so happens to be an important figure in said academy might have something to do with it. Cynthia Breaker is a former mob enforcer for a powerful mage and used to be one of the most feared werewolves in the city, until she had a mysterious falling out with her entire social circle, lost her powers, and is now persona non grata to everyone.

Zero needs a bodyguard, Cynthia needs a mage who can help her regain her abilities and get her life back in order. It’s an alliance of convenience with a lot of ugly stuff on the horizon.

“Lunar Room” #1 is written by Danny Lore, who demonstrates a solid understanding of character and delivers some fantastic dialogue for the debut issue of their new series. Lore uses a lot of voice over narration throughout the book and deftly jumps back and forth between Zac and Cynthia to show the audience what’s going on and what everyone is thinking. While Zac’s voice is very good at providing exposition and momentum to keep the story going, it’s obvious that Cynthia is the actual main character of the story since they are the one who gets most of the emotional investment. Lore does a very good job of making the characters fit inside the world they’ve created and gives the reader a clear idea of Cynthia’s backstory, desires, and how everyone perceives her and her situation. The best part is that Lore makes the whole thing feel very natural and doesn’t beat the reader over the head with what they’re trying to say and the themes that they want to promote in the book. A lot of it is left to the reader to figure out on their own, and it’s a style of writing that a lot of aspiring writers could learn from.

While “Lunar Room” #1 does a very good job with the fine details and character work, it does have some problems when it comes to the bigger picture. While Lore does a great job of signalling the reader to the thoughts and desires of Cynthia and Zac, there isn’t any real sense of their external motivation. We hear that Cynthia is a disgraced mob enforcer and we see that Zac wants to cause chaos and steal from the academy, but we don’t get any real sense of why they are in the situations they’re in. Couple that with a distinct lack of world building and the whole book feels like it lacks substance. Granted, it is only the first issue and if given the choice it is more important to establish character than setting, but it’s still an important detail that is somewhat lacking in the book.

The art work for “Lunar Room” #1 is provided by Giorgia Sposito and while it shares a lot of the strengths of the script, it also shares some of the problems. Like the writing, the characters look great. Sposito has a narrow line style that combines well with DJ Chavis’ colors to give the whole thing a pretty cell shaded look that would be right at home in a Rooster Teeth show or a well made Japanese RPG. As for the characters themselves, the clothing and monster design looks very sleek and modern, presenting a book that looks original but provides a taste of familiarity to make the readers comfortable. But the real highlight of the artwork is the facial expressions and emotions, which Sposito does extremely well. At no point in the story is the reader lacking emotional nuance and we know exactly what is going on in their heads without having to rely on overly complicated exposition and narration.

Once again, while the artwork on “Lunar Room” #1 is very good at the small details, it does suffer a bit on the broader strokes. This comic has a variety of locations ranging from high class and grandiose to lowbrow and nasty and at first glance there doesn’t appear to be a whole lot of difference between the two. The settings feel bare and a bit lifeless and the world feels like it lacks character. On top of that, some of the smaller action moments feel a bit stiff and there are moments where the anatomy of the characters feel a bit out of place.

“Lunar Room” #1 is an intriguing idea and has some amazing characters that will have no problem gaining fans and while the book does suffer a bit from a lack of world building, it’s something that can be fixed in later issues.

Final Verdict: 7.5- It’s a story with an intriguing setting and two great main characters and fine details, but suffers from a lack of the broader details that would draw readers into its world of tech and magic.