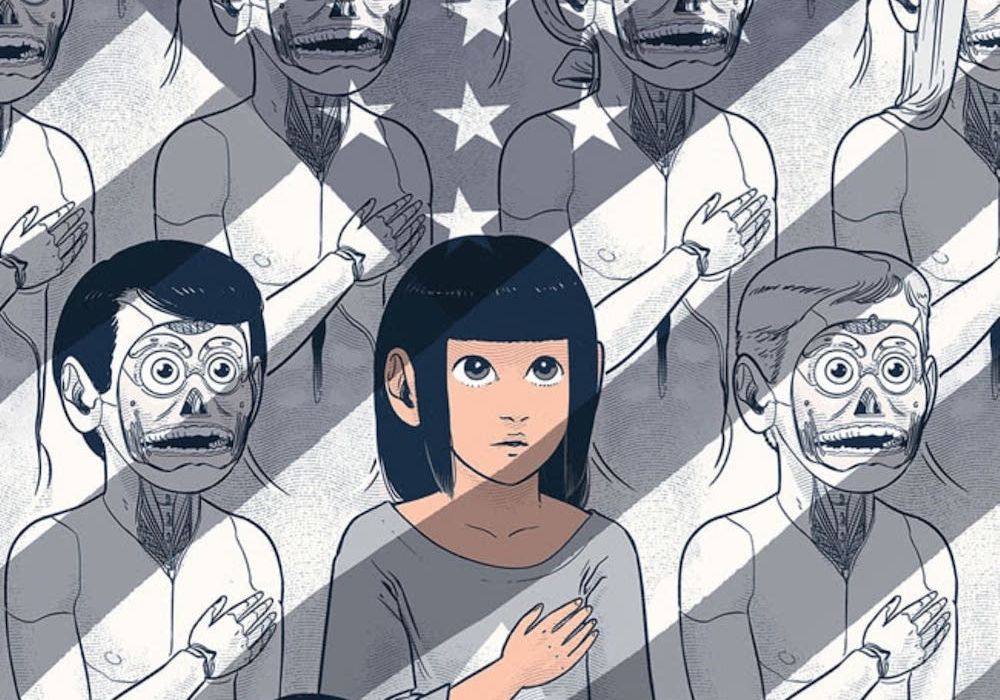 We live in a vast, interconnected, global world that is currently going through some pretty intense stuff. At this moment, a lot of people are exploring, questioning, and looking to redefine a bunch of the social norms and constructs that previous generations either built or take for granted.

“Made in Korea” is a six issue mini series from Image that has decided to take on the daunting task of re-imagining the idea of a family in a world where traditional families are literally impossible. Let’s see how it works out. 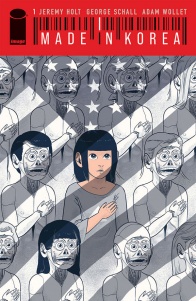 A QUICKSTART GUIDE FOR YOUR PROXY
STEP 1: Remove box.
STEP 2: Power on.
STEP 3: Raise your child.

For Jesse, the world’s first true A.I. system, growing up means learning to think outside the box. This exciting new six-issue miniseries will redefine what it means to be a family in an age when biological parenthood is no longer a reality.

“Made in Korea” #1 takes place in a future where something has gone wrong with humanity and people can’t seem to be able to have children. This has led to the rise of a booming robotics industry where people can purchase very expensive androids that look like children and are very good at mimicking human behavior. Into this new world comes Jesse, the world’s first true AI who is the newly adopted android daughter of an American couple named Bill and Suelynn and the product of a Korean programmer named Kim Dong Chul who didn’t realize that his work has caught the attention of his employers and seems determined to hide his work from the rest of the world.

Jeremy Holt provides the script for “Made in Korea” #1 and the world they have created is incredibly familiar, but just futuristic enough for us to realize that this is a work of science fiction. Holt’s greatest strength is their ability to write the quiet, ordinary conversations between people that happen on a day to day basis without much thought. The backstory and motivations for all of the characters are revealed in very organic conversation in very natural settings for each of the characters that is easy to follow and to figure out. This helps lay the foundation for the arrival of the android Jesse into the lives of Bill and Suelynn, which is treated with just the right amount of wonder, confusion, and joy that comes with being given a child in a world where family is a luxury that you have to pay for. It’s a wonderful slice of life comic that will hopefully maintain its sense of wonder throughout its run.

While Holt is brilliant at the small moments in “Made in Korea” #1, the larger moments and overall narrative of the story do have some issues. There’s no real concrete sense of overarching theme or a clear idea of what the book is trying to say. The book dedicates a huge portion of its space to the small family moments with Jesse and the couple, but seems to neglect the corporate intrigue story that Chul is a part of and allowed the couple to adopt the android in the first place. Also, the comic seems to end rather abruptly with a reveal that doesn’t appear to be that important since Jesse appears to be behaving and acting in a way that could be perfectly normal for androids like her. There’s nothing wrong with filling a book with small moments, but it does take up valuable space that could be used to move the plot forwards and get the reader invested enough to buy the second issue.

The artwork for “Made in Korea” #1 is provided by George Schall, who does an amazing job of introducing the reader to a world that is both very ordinary and very futuristic at the same time. Schall has a very narrow lined and simple art style that gives the book a streamlined and clean feel. Even when the setting is supposed to be very cluttered and messy, Schall does a great job of creating pages that are very calm and pleasant to look at. Schall also does a great job of creating different tones and feels for the two different settings: the futuristic and high tech Seoul and the still futuristic, but much more mundane and familiar Texas. Schall accomplishes this through color and architecture. Seoul has a much more futuristic and crowded feel, with a dark neon green color palette, futuristic building designs, and warehouses filled with incomplete and creepy looking robot children. Meanwhile, Texas looks a lot more familiar and spread out with lighter, earth tones and much more traditional architecture. It’s a brilliant case study in how to use design and color to tell a story and showcase two different cultures in the same book.

While Schall does wonders for the overarching story in “Made in Korea” #1, he also compliments the small, slice of life moments in the comic as well. His narrow and simple line work allows for some great emotion with the characters and Schall has a great sense of body language and facial features that allow the humans to feel very natural and relatable while the androids look like something straight out of the uncanny valley.

Final Verdict: 7.9- The overall plot has some pacing issues, but the small and quiet moments make the book worth reading.