Gene Ha explores small-town disaffection and alternate dimensions in a story about being the not-quite-chosen-one. 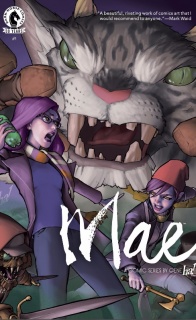 When she was just a girl, Abbie discovered a portal to a fantasy world and for the last couple of years has been having great adventures there: defeating horrible monsters, power-mad scientists, and evil nobles. But when she turned twenty-one it all came apart and she decided to return home. Her sister, Mae, has had no idea what happened to Abbie all this time. Her tales are too hard to believe; that is, until the monsters and other terrible creatures start to cross over to our world . . .

Anyone who’s even vaguely familiar with the fantasy/sci-fi genres (and I’m betting if you’re reading this then you have at least a passing interest…) can recall their fair share of ‘Portal Fiction’. Your protagonist, usually a young intrepid misfit, someone finds a way from their own mundane reality into a parallel world where wonder and danger abound. Conquering their fears, and often an evil dictator or two as well, the young hero returns to their own realm older, wiser, and with some surprisingly transferable skills to top it all off. The trope is a well worn one, and offers fans of escapism a chance to lose themselves in another world. In “Mae” #1 Ha has flipped this traditional script in more ways than one to produce a story about what happens after the demons are slain and the final curtain falls.

Mae, our despondent protagonist, is living a low-rent life in a nondescript town as an intelligent underachiever and primary care-giver to her ailing father when her sister Abbie (who the family had long thought disappeared) returns babbling tales of far of places that sound like the work of speculative fiction. Although Mae is sceptical initially, a close encounter with a being that defies conventional definition soon leaves her with little doubt that, while she doesn’t really know her estranged sister, she’s going to have to trust her if she wants to survive.

Ha is a artist first and writer second, and that distinction feels like an important one to make going into this issue. One of the first things I noticed was his choice of panelling. Ha favours no more than three or four panels a page, each large, airy, and with a good amount of space to offer up emotive art that tells a subtle, slowly unfolding story. the first third of this book is spent with Mae and her friend Dahlia catching up as Dahlia is back in town from university, and Ha’s spacious, conversationally focussed panels really offer a fantastically understated bit of emotional set-up in this pages. Through both his art and words we get a sense of Mae’s complicated emotions towards the friend that flew the nest, and Ha manages to portray Mae’s believable air of jealousy and interest.

Oddly enough, I feel as though this element of Ha’s story, that of Mae feeling stranded and unsure of her next steps in life, is probably one of the strongest beats of the issue. Perhaps it’s just my own looming quarter-life crisis talking, but Ha’s distinctive illustrative style, dropping out almost all of the background images to pull focus directly to his meticulously detailed foreground, really forces the audience to empathise with Mae. His dialogue is smooth enough for the most-part, with a strong balance between humour and pathos so that Mae manages to seem disillusioned without ever seeming dour. There’s a feeling of depth to her relationship with Dahlia that feels unforced and comfortable, although at times Ha’s scripting in this scene slips into the slightly caricaturish, with one particular panel that has the friends quoting a scene from Doctor Who feeling more than a little over-egged. Still, his words work as a great accompaniment to his wildly expressive faces, so well lit and shaded that even four pages of solid talking heads manage to feel full of energy and light.

Mae’s meeting with Dahlia is interrupted when she gets a call from the Sheriff’s office to let her know that her sister Abbie is being held in custody, after having been missing for seven years. Ha’s character design for Abbie is a fantastic mix of steampunk, naval, and military wear that, when coupled with Ha’s signature cell-shaded style should remind any hardcore gamer of the Bioshock series. Abbie strolls back into Mae’s life with all the swagger and joie de vivre that Mae lacks. While Ha does put in effort to make the distinction between the two sisters obvious both in visuals and scripting, there’s a lack of tension between the abandoned Mae and the abandoner Abbie that seems like a little bit of a cop-out. ‘It’s been seven years Abbie, so where have you been’ seems like a little bit of an underreaction from a sister who must have thought a member of her family dead or kidnapped, but it’s about all we get from Mae before Abbie sweeps her questions away and moves the story along.

“Mae” #1 gets a lot of the heavy lifting out of the way in terms of establishing the status quo, and it even manages to introduce us (well, the readers at least) to the shadowy figures of the first few monsters who we can only assume followed Abbie through the portal when she came home. It’s a slow-burning first issue but, as mentioned earlier, Ha’s magic for this bok seems to lie less in the swords and sorcery that you might expect and more in fleshing out the characters involved in the adventure. There’s a slight air of Rucka and Scott’s “Black Magic” in the ratio of mysticism to mundane, and fans of that book will definitely be able to get on board with this mystery romp on offer here. In just a single issue Ha manages to set up his high concept and introsuce us to a cast of characters, all while rendering the lot in spectacular form on the page. Barring a few slightly eyebrow-raising scripting choices, “Mae” #1 is a pretty fantastic first issue that looks set to explore the lives of those whose existence isn’t governed by prophecy or destiny, and randomness and restlessness is something that I think we can almost all relate to.

Final Verdict: 7.7 – Smooth and satisfying, Ha’s solo effort is something for all fans of subverted fantasy.