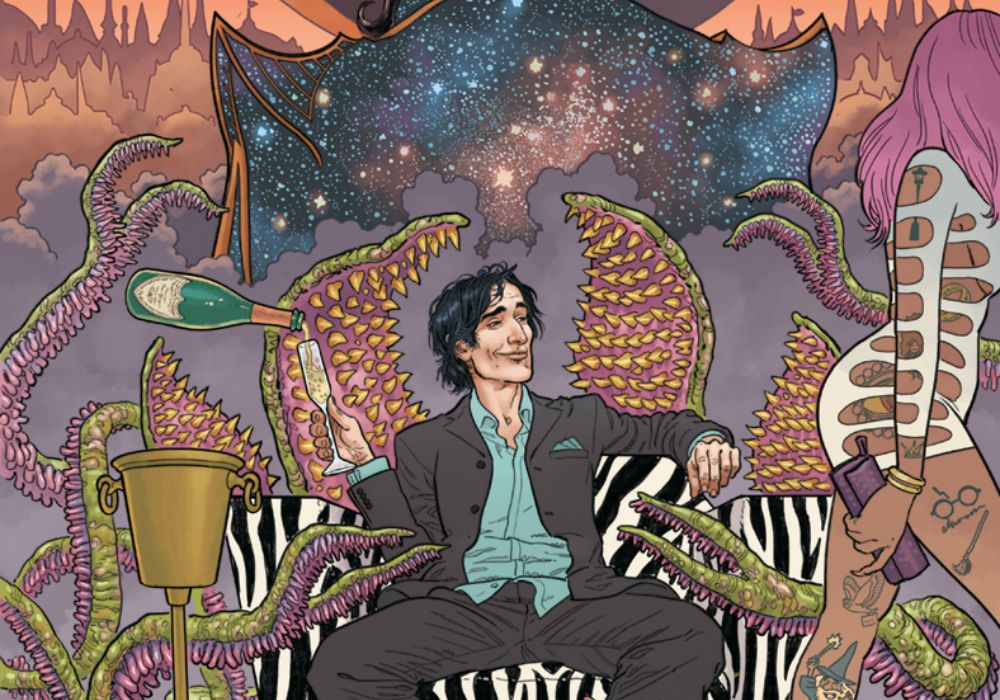 It’s the dawn of another magical mystery tour. “Maestros” #1 is just waiting to take you away. So, the real question is just what kind of trip is Steve Skroce taking you on. 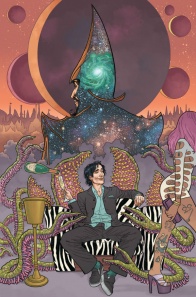 The Maestro and his entire royal family have been murdered. Now, his banished son from Earth will inherit the Wizard King’s throne along with a spell that turns its user into GOD. With enemies everywhere, will this Orlando-born millennial be able to keep his new magic kingdom? From STEVE SKROCE, the storyboard artist of The Matrix trilogy, the artist and co-creator of WE STAND ON GUARD and Doc Frankenstein, the writer / artist of Wolverine, and the artist of Amazing Spider-Man and ALAN MOORE’s YOUNGBLOOD.

“Maestros” #1 kicks off with a mighty heel-stomp crushing the skull of a literal god-head to the point where bone fragments and assorted viscera sail into the air in all their detailed, violent glory. It’s impactful, the kind of image that stays with you awhile. It’s also a clear statement of intent that Steve Skroce won’t be holding anything back on this latest journey, both narratively and in terms of plastering panels with whirlwinds of fine-lined minutiae.

Steve Skroce opens the book with a splash page and double-page spread that depict the grisly fate of the Maestro and his court with tightly drawn precision. There’s a rumpled, wrinkly quality to how he captures the carnage and gore that’s reminiscent of Geof Darrow without feeling derivative. Although that might have more to do with Skroce’s creature design of the monstrous horde sacking this royal family. They have a distinctly reptilian feel woven in and around various hairy millipede and centipede insecto-forms. Then again, with Dave Stewart dousing the vile Mardok, the leader of this evil pack and seemingly the series’ big bad, with washes of sickly greys, greens, and ambers beneath all the lesions, scabs, tumors, and maggots Skroce uses to pollute the villain’s skin, it’s not too big of a stretch to imagine parts of this story happening in a universe parallel to one where we’ve met a certain cowboy of the Shaolin persuasion.

But the oversized “Maestros” #1 isn’t all meticulous, intricate ultra-violence. Don’t get me wrong, a lot of it is. However, just as the narrative bounces between the present timeline of the Maestro’s estranged wife Margaret tracking down their son, Will, and flashbacks to Will’s first learning of the mystical, cosmic truth about his lineage, Skroce fluctuates between that type of sprawling maximalism and a more detailed minimalism. The quieter, character moments feel akin to Jon Davis-Hunt’s current work in “The Wild Storm.” It’s an excellent choice to dial things back a bit, since Skroce is so adept at conveying the essence of Meethra (the fallen Maestro’s given name), Margaret, and Will through their facial expressions and body language. Skroce’s scripting feels a bit stiff in comparison to what the artwork so deftly shows about their personalities – Will’s innocence/cynicism, Meethra’s smarmy arrogance, Margaret’s conflicted devotion/loathing.

The most effective bits of character work could have easily been overwhelmed had the hyper-detailing been kept up in the background. That being said, Skroce has no qualms about letting his artwork explode over the panels when it has to. In fact, it’s the balance between loud and quiet that propels the story along with such vibrant pacing.

On the surface, Skroce might not be serving up the freshest tale. The slacker prodigy rising up to save/rule the universe (the end game isn’t quite in focus yet) is only slightly more original than the young boy’s mystical awakening to his true potential. Then again, “Maestros” #1 is populated with enough narrative and visual ingenuity that it feels like it will use the tropes as a launchpad rather than be shackled by them.

When we first meet the adult Will, we’re introduced to the unique cottage industry he’s set up for himself using the faintest touch of his magic. In an era when email junk folders overflow with spam promising drastic male enhancement, increased stamina, etc., it’s not even a stretch to think that someone who could actually would create a magical elixir to promote the real deal. Will sells his potions to oilmen and other overcompensating billionaires, while Skroce renders the endowment in all it’s full-frontal, veiny glory.

Elsewhere, when “Maestros” #1 is not reveling in that type of gratuitousness, we see the flashback of Meethra checking in with his earthbound family. And there’s such wonderful juxtaposition of the mundane and mystical at play. The Maestro’s flowing, regal robes are so many worlds apart from the living room sofa he sits upon and the wax cups and cardboard containing the cheeseburgers, french fries and soda that Margaret, Will and himself wolf down.

Steve Skroce’s art absolutely carries this issue. It’s sprawling, momentous, and intimate (in more ways than one). That’s not to say the story itself fails to pull its own weight, either. Sure it might tread some familiar ground, but Skroce adds some twists and turns along the way that are all his own. And it really just needs to be reiterated, “Maestros” #1 looks astounding.