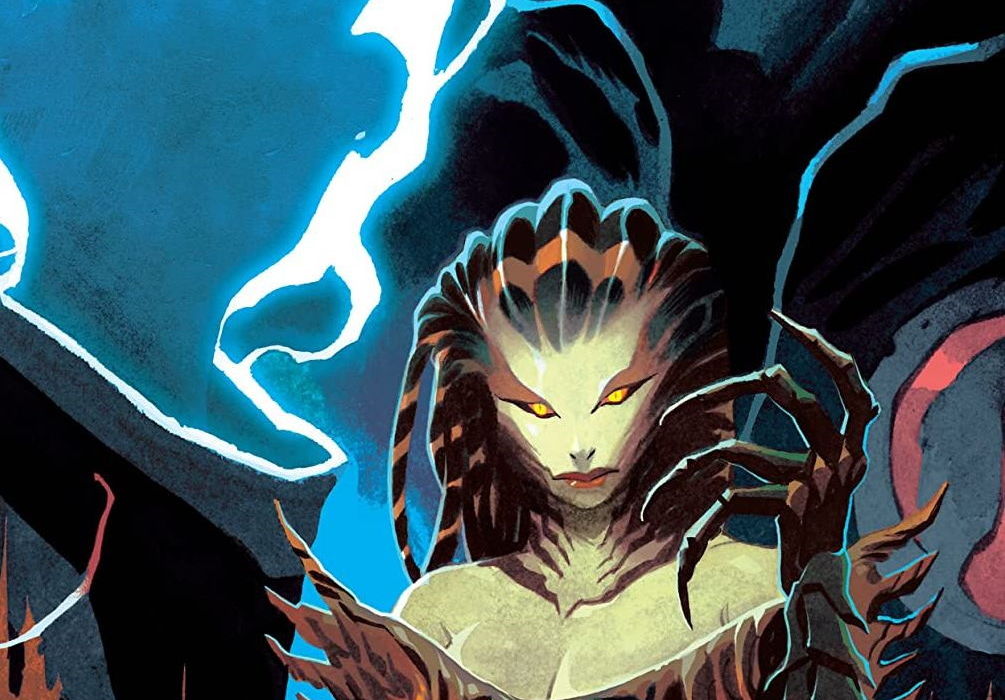 There’s a particular joy finding out about the deep lore of a seemingly simple surface-level thing, be it a fighting game, toy line, or trading card game. The level of detail shows the love and attention that a team puts behind making a game and creating a universe. Recently, a friend began to explain the world of Magic: The Gathering, a sprawling world of planes, monsters, and (of course) magic. When there was an announcement of a new comic based in this world, adventures with the characters, schools of magic, and setting of Ravnica, it was intriguing. How would a comic be able to capture this massive mythology for someone who had only played a few rounds of the card game? “Magic The Gathering” #1 does an admirable job trying to balance characters, worldbuilding, settings, and the new plot of the world of Ravnica, but ultimately proves to be an unruly introduction to the world. 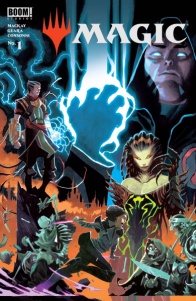 * Across the vast Multiverse, those gifted with a “spark” can tap into the raw power of Magic and travel across realms — they are Planeswalkers.

* When coordinated assassination attempts on Guildmasters Ral Zarek, Vraska and Kaya rock the city of Ravnica and leave Jace Belleren’s life hanging in the balance, a fuse is lit that threatens not just these three Guilds, but the entire plane of Ravnica.

* …which will lead them straight to one of the most enigmatic characters in Magic history!

“Magic The Gathering” #1 begins with an epic and sprawling narration, establishing the existence of planes of existence, aspects of a multiverse of magic, ultimately narrowing down to the city of planeswalkers, Ravnica, and the leaders of the three guilds who the action follows. To say it’s a lot is something of an understatement, a lengthy metaphysical investigation about where we are and where we’re going. To his credit, Jed Mackay does a good job of setting the scene, but it’s a lot of narration in a short window of time. The issue begins to pick up when you hear the characters, who represent their school of magic and their overall worldview.

One of the benefits of the strong characterization is that it ultimately helps to clarify that initial narration. Kaya, Ral, and Vraska are all tapping into the same power source, a shared engine that fuels the multiverses from which they originate, but interpret that magic in different ways. It’s an interesting observation of magic and one that makes sense when you see how they channel their magic, be it through ghostly assassinations, magical artificing, or a cycle of rebirth. The problem is that the characters all read pretty similarly. Each has a similar sardonic wit. Each acts with disbelief at the offense of being attacked. Each makes jokes about their school of magic. When the three are together, it feels like they have a shared history, and the experience of being a planeswalker may give them a certain similar experience and worldview. Of the three, Ral and the Izzet League stand out as the most intriguing, with their artificing and turning magic into instruments of war, but the introduction of the three guilds feels distinct. Their leaders, though, feel cut from a similar cloth.

The real success of worldbuilding is thanks to the art team of Ig Guara and Ariana Consonni. As a person who doesn’t know much about Magic the Gathering, there are things you pick up through osmosis of existing in the wider geek culture that their color dictates the school of magic. Because of this, it gives Consonni a chance to play with the colors of magic and create different impacts of the different colors of magic. Guara also does an incredible job of realizing what the various guilds would look like, seamlessly moving from the Cathedral-like hall of the Orzhov Syndicate, the crowded and busy machinery of the Izzet League, or the decaying and earthen expanse of the Golgari Swarm. While the writing was good, the art truly becomes immersive, with lots of small details that catch the eye and show the magic of “Magic The Gathering” #1. In many ways, comics are the perfect medium for a magical world, especially when each school of magic manifests itself in different ways. From the lightning-inspired bolts of technological-based magic, the green mist of magic that embraces the cycle of life and death, to the psi-blades of ghost magic, each school feels unique, which is something you can’t achieve without such strong visual language. It will be interesting to see how the other schools look moving forward, but if the first issue is any indication, the world of Ravnica is safe with this art team.

Ultimately, the biggest problem with “Magic The Gathering” #1 is that it sets a hook like a lot of comics but didn’t necessarily land the return reader. It may be a lack of familiarity with the source material, but nothing stuck with you. There are obviously bigger schemes at play. It seems that over the following few issues, the threat will continue to spread to other guilds and other schools of magic. Still, as a neophyte, they aren’t doing much to encourage a return visit unless you are familiar with the world. There are moments that the story feels overwhelming, riddled with references that reward those who have played the game or read other stories. Of course, these books have their place, but this isn’t the best introduction to the world of Magic: The Gathering.

Final Verdict: 6.0 “Magic The Gathering” #1 has its moments, mainly thanks to the strong art of Ig Guara and Ariana Consonni, but ultimately feels too unwieldy to new readers experiencing the world of Ravnica.