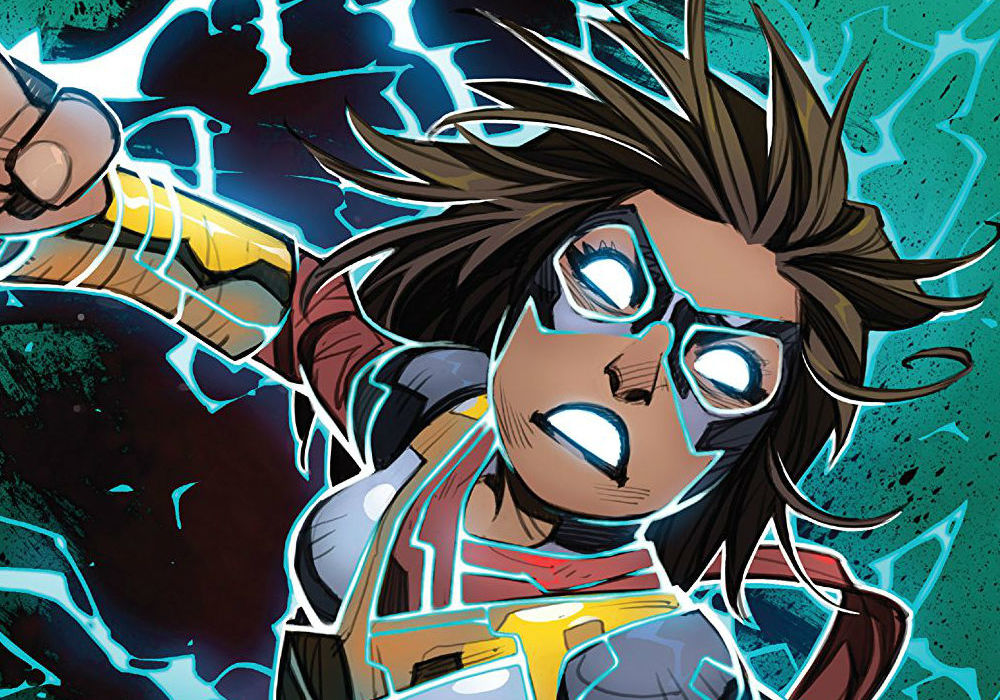 On the surface, the superhero life seems like a pretty sweet deal. You get a cool costume and some fun stories at the very least. Maybe you travel to one or two fantastical alien worlds or dimensions. If you hit the A-list? You get next-level fame. Mega-fame. Back in the first volume of “New Avengers”, Iron Man once said that Earth’s Mightiest Heroes were “movie stars, rock stars, and reality-show stars all wrapped up in one.” Not to mention all the power. I mean, who wouldn’t want to bench-press mountains or run at the speed of light? 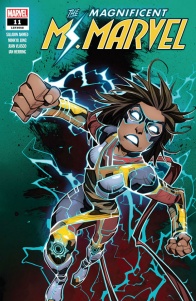 Written by Saladin Ahmed
Illustrated by Minkyu Jung
Lettered by VC’s Joe Caramagna
Colored by Ian Herring
As a monster of Ms. Marvel’s own making wreaks havoc across New Jersey, Kamala’s father clings desperately to life in the hospital. When Kamala is forced to choose between her heroic duties and her heart, which will win out?

Thing is…the superhero life is not all it’s cracked up to be. The cold reality of it can’t hold a candle to the fantasy. In “Magnificent Ms. Marvel” #11, Kamala learns this lesson the hard way. Actually, it would be more accurate to say that she continues to learn this lesson.

The fanfic writing teenager was all about superheroes long before that terrigen cloud empowered her. When she did become a superhero, she tried her hardest to emulate Captain Marvel and the other Avengers. It was pretty clear how very badly she wanted to be a part of their world. In recent history though, Kamala’s had to do some serious growing up. Her heroes failed her big-time back in “Civil War II”, her idol Carol Danvers especially. The fan-girl actually walked away from the Avengers. Now there’s a new villain on the block all while her father’s fighting a terminal disease. The superhero life comes with endless trials and tribulations. Even when she’s feeling not so magnificent, it isn’t going to stop.

While it sucks to be Kamala right now, her pain is our gain. The rough time makes for a fairly intriguing comic, I have to say. This issue felt very reminiscent of a specific type of Spider-Man story to me. You know, the ones where everything in Peter Parker’s life just refuses to go right, both on the personal and superhero fronts. You see what I’m saying?

Okay, just swap Bruno out for Mary-Jane and Abu out for the often-sickly Aunt May. Stormranger especially seems to be Kamala’s analogue for Venom, right down to their origins. Both the symbiote and the Kree nanite suit started out as cool new costumes…now they’re less-cool and definitely more homicidal. It’s all a lot like Spider-Man, not a bad thing in my book.

“Magnificent Ms. Marvel” #11 isn’t completely without problems but they aren’t glaring issues thankfully. The romantic tidbits with Bruno feel ill-timed and just a tad shoehorned in. They’re hardly there but with everything else going on, the story could have done without them entirely. Writer Saladin Ahmed has a solid grip on Kamala’s inner monologue but it felt somewhat mismatched against the events of this comic. On one hand, Ms. Marvel waxes poetic about how we fight ourselves…on the other, it’s a grudge match with an evil robot. Pretty straightforward, not all that deep. The introspective, philosophical thoughts might be more at home in a quieter issue.

Artist Minkyu Jung makes the aforementioned grudge match a marvel to witness though. This comic is practically all action sequences and they’re just great. The action feels very kinetic not stilted like in some other comics. There are little touches that make the fight engaging like some debris in a page’s gutters or Stormranger’s menacing cannon extending outside of a panel’s boundaries.

We can also see the wear and fatigue on Kamala as she has to both fight Stormranger and save the life of the previous issue’s villain, Mr. Hyde. Our poor herione is all scratched and scuffed up as she does battle in her civilian clothes, running completely on fumes. Then there are the action poses! The full page of Kamala squaring up on an attacking Stormranger is absolutely beautiful. It’s also, along with the rest of the issue, a great study in body language.

Kamala and Stormranger are presented as polar opposites in “Magnificent Ms. Marvel” #11, yin and yang to one another. While the android leaps forward on the offensive, Kamala is crouched down in the defensive pose. Throughout the rest of the comic, Stormranger stretches and bends in ways that are subtly…off. Her movements have just the right air of creepiness and make her seem (pardon the pun) inhuman.

On the other hand, Ms. Marvel strikes several defensive or heroic poses, reaching up with embiggened fists to deliver a powerful haymaker. Her powers are depicted in a cartoon-ish fashion like she’s Popeye or a Looney Tune. That works in this comic’s favor though and reflects her personality. In the face of danger, Kamala Khan still retains a sense of optimism and youthful energy about her. It’s pretty refreshing to see. This issue leaves our heroine in dire straits but there’s no doubt the Magnificent Ms. Marvel will rise to the challenge. In the hands of this creative team, it should make for a good time.

Final Verdict: 7.5 – A hard-knock life for Kamala but a bang-up issue for us.