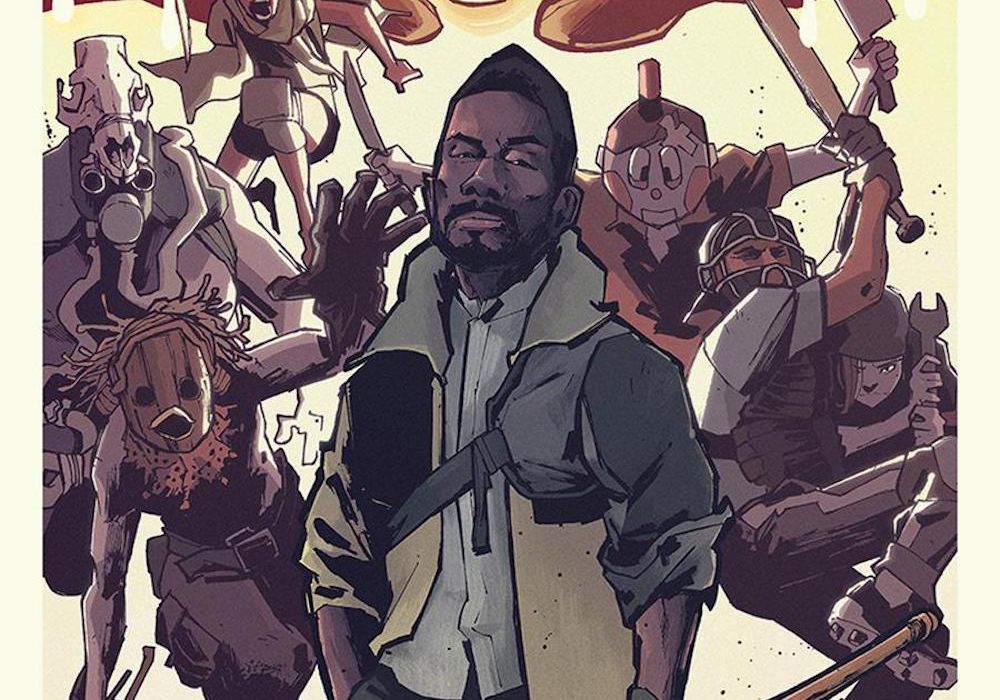 Stuck in a mall at the end of the world. Seem familiar? Think again. 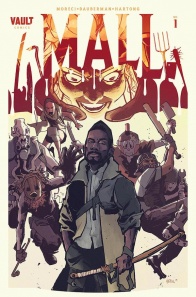 Here in the heartland of the U.S. of A., the world has ended! But worry not, because the mall still stands. And within the walls of this consumeristic mecca lies a new world order: box store tribes and name brand gangs, all vying for limited space and resources. So, actually…you can worry! Especially for poor Andre Reed, who, after the assassination of a tribal leader, has to navigate the mad haven to prove his innocence, and prevent the end of world, again!

What caused the end of the world? In certain series, fans may worry over what led to the situation, the mechanisms behind it and how to bring things back to the way they used to be. After all, being trapped in a mall at the end of the world may leave some readers wondering “wherefore art thou [George A.] Romero?” Well, in “Mall” #1, Michael Moreci and Gary Dauberman make absolutely clear that it doesn’t really matter. Through a succinct, one-page description, everything about the end times themselves illustrates that how exactly life came to its current point is just backstory, and is nothing more than a starting point for what is going to exist going forward.

That is not to say that Moreci and Dauberman avoid the metaphor put in place by the likes of Dawn of the Dead and those that paid homage to it, that of the negative impacts brought forth by consumerist culture. However, rather than be the up front issue, focus instead falls upon a general dog-eat-dog world populated by cult-like tribes and gangs taking their names from long-dead brands in the mall itself. In this social Darwinist oasis long after the fall of civilization, why would people care about what they can buy? Instead, it’s all about what people can take, rules be damned.

The setting provided by the story is a small closed circle trapped within the boundaries of the mall itself, effectively both expansive and constricting at the same time in different ways. The effect of the logistics within the mall itself creates a pessimistic, yet very interesting microcosm of modern society, one ruled by the aforementioned groups who appear to have domain over areas of the mall, all of them vying for the same limited resources.

When it comes to introductions, Moreci and Dauberman use a “show, don’t tell” concept beyond the initial few pages, giving exposition exclusively through snippets of dialogue instead of using an unending stream of exposition. While there isn’t a lot of explanation given at all, that style works very well in the vein of Mad Max: Fury Road, allowing the setting and personalities of the characters to tell far more than a bland dump of information ever would. Relationships between characters are implied, prior events merely alluded to, together creating an overall impression of the series without giving much in the way of detail. Under many a writer, this kind of storytelling would collapse under its own weight, but Moreci and Dauberman are more than up to the task, even if some of it may struggle at times in this early stage of the story and its sure to be expanded cast.

Much like Hayden Sherman’s work on Moreci’s “Wasted Space,” Zak Hartong’s artwork on “Mall” seems to be intentionally rough, befitting the broken, compressed world presented by the premise. In a weird way, the chaos of the artwork seems to increase as the issue goes on, the closer it gets to protagonist Andre Reed of the Gacy’s tribe. Early on in the issue, artwork is precise and self-descriptive, helping to show how the world has treated its own demise. However, Reed, while more accustomed to the world of the mall, nonetheless enters the story a bit disoriented, and the conflict he is thrust into through what appears to be a frame job for an assassination does not help him to see things altogether clearly. Hartong’s artwork uses that chaos, creating disturbing, at times bizarre imagery such as an overly extended forehead or heavily varied amounts of detail in the faces of the various people involved in the story itself. In some cases, the physical positioning of one group compared to another is not immediately apparent, furthering the sense of disorientation in moments of heavier conflict.

When faces are used in detail, Hartong excels at showing the extremes of emotion, from anguish or rage to joy and religious rapture and anything in between. The conflict between the Beyonders (not to be confused with the group from Marvel Comics) and Andre Reed shows just how tense things can be in arrangements between groups in the mall, from the fanaticism shown by Tess to the outwardly calm aggravation on the part of Franco to Andre’s own frantic attempts just to survive from one moment to the next.

Addison Duke is, as always, very good with colors, using different color washes to differentiate one area of the mall from another. The warm colors, such as reds and browns, emphasized by the Beyonders in their introductory scene contrast against Franco’s group and its closer concentration on greens. Those colors themselves work against the far more varied, chaotic color palette of the Spikez gang, though it does have a bit more pink than the others. All of that works to differentiate itself from the cooler, heavily shadowed, more natural coloring of the tunnels below, which seem to finally be different from the main chaos of the mall itself.