Taking place between the previous run and Chip Zdarsky and Marco Checchetto’s upcoming run on “Daredevil,” “Man Without Fear” #1 is a miniseries that tries to keep readers updated on Matt Murdock’s current status quo, but without pushing the story forward too much. Is this issue able to do more than simple be a stop-gap between issues of the regular “Daredevil” comic? Read our review to find out. 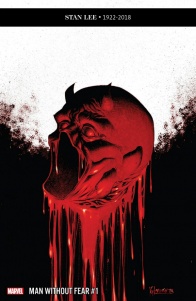 Written by Jed Mackay
Illustrated by Danilo Beyruth
Colored by Andres Mossa
Lettered by VC’s Clayton Cowles
Daredevil is gone, but Hell’s Kitchen is still a place of heroes and villains. Foggy Nelson will learn what it means to live in a world without a Daredevil. And without a Daredevil to protect it, has hell come for his city? Who is The Man Without Fear?!

The pitch for “Man Without Fear” is a pretty good one. For five issues, the series will follow a different one of Daredevil’s supporting cast as the visit him in a coma. It is the perfect set up for a series of one-shot stories that take a deep, character focused dives into Daredevil’s supporting cast. These are characters with long histories, who for most of their time have been seen through the lens of Matt Murdock’s own tragedy. It is an interesting idea, but the execution of this series is extremely lacking.

“Man Without Fear” #1 follows Foggy Nelson, who spends much of the issue monologuing over Matt Murdock’s unconscious body. Foggy’s monologue here is nothing especially revelatory. In fact, it’s mostly the same rote discussion of fear that has been covered in other “Daredevil” issues a number of times. But, while this issue was pitched as Foggy Nelson dealing with a world without Daredevil, the issue spends most of its time in Matt’s head, following him through an extended dream sequence where he confronts demons from his past.

The dream sequence, like Foggy’s monologue, doesn’t bring much new to the character. It works as a nice refresher on the different costumes Daredevil has had over the years and does break up what would have probably been a pretty visually mundane issue if it had actually been focused on Foggy Nelson standing over a hospital bed.

Again, the idea of this dream sequence is, at least conceptually, sound. Daredevil fights against parts of his own psyche, larger than life, each dressed in a different one of his costumes, as they try to convince him to give up crime fighting. In many cases, superheroes work best when they turn real social issues into things that someone can punch. But in this case, it just ends up feeling rote.

The art in the dream sequence is probably the most interesting part of the issue. The designs that are given to the representations of Matt’s psyche are interesting. I’m always a sucker for when someone leans a little harder into the devil part of Daredevil, and at least one of the figments of Matt’s imagination does just that.

But the actual action that takes place during this dream sequence isn’t very exciting. There are easy excuses for the reasons it’s boring. It takes place in Matt’s head, so why would there be a defined place or setting for this fight? But these excuses don’t change the fact that much of the action in this issue is Daredevil fighting these figments in a completely undefined space, with completely black backgrounds. When there is a defined space, it’s recreating famous scenes from past “Daredevil” issues, but without adding anything of substance to these recreations.

By taking place in Matt’s head, there is so much potential for the visuals this issue could present. It could take place anywhere, at any time. There could be any combination of different parts of Daredevil’s history, juxtapositions of different moments with Foggy’s monologue that could maybe create something interesting. But “Man Without Fear” instead just recreates these famous scenes, saying nothing except, hey, remember that these exist?

There is also some minor confusion with the lettering in this issue. Foggy’s monologue that he is giving to the unconscious Matt is rendered in all caps lettering, while Matt’s internal monologue is presented in mixed case lettering. However, both of these styles of caption boxes are presented with black outlines and white fill. With a little thought, its easy to tell who is saying what. But that moment of thought is enough to pull you out of the story. It’s a small thing, but it’s one more thing in this issue that just feels unconsidered.

That is “Man Without Fears” biggest problem. It doesn’t feel, in any way, necessary. It’s not important artistically, as it doesn’t present anything new or even especially interesting for the character of Daredevil. It’s not important plot wise, or for continuity, as it doesn’t seem to be doing any real connective tissue between the two major runs of “Daredevil” except reminding readers that Matt Murdock is in a coma. And, even from the most cynical perspective, it doesn’t seem especially necessary as a stop gap. No one was going to forget who Daredevil was in the month gap between the new and old runs on the title. It’s a weekly event that seems almost entirely purposeless, and unless you really cannot wait a month for your fix of Daredevil, this is a series you can probably just skip.

Final Verdict: 4.0 – With its first issue, “Man Without Fear” #1 doesn’t present a compelling reason for this miniseries to exist.