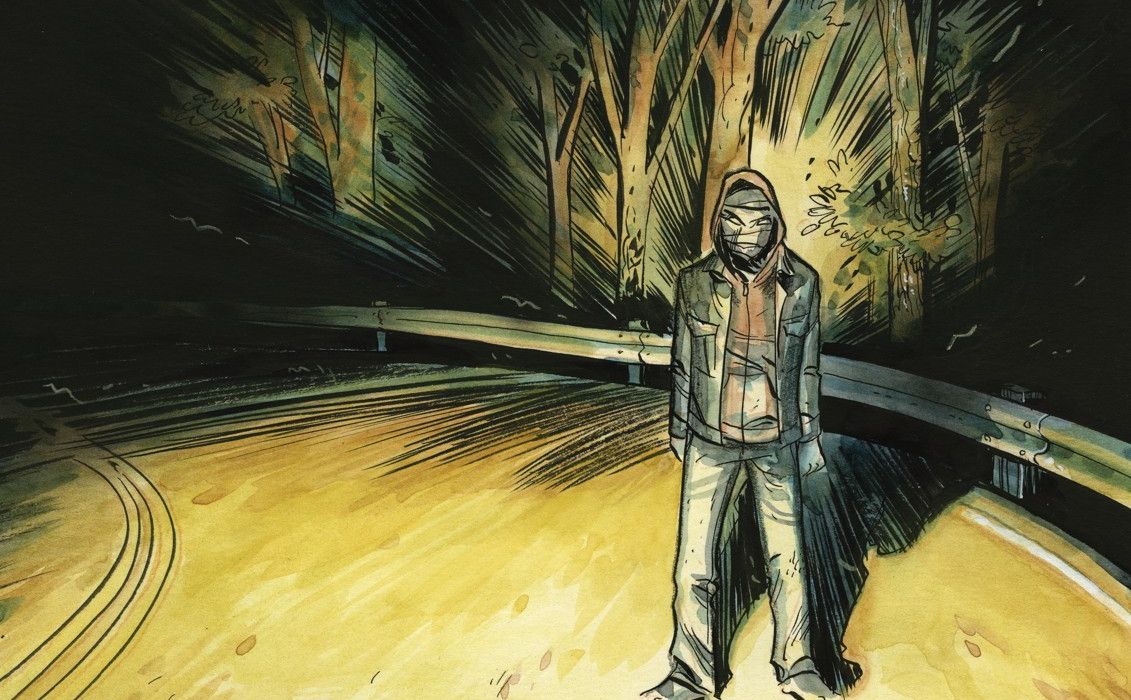 Writers Cullen Bunn (“Harrow County,” “The Sixth Gun”) and Brian Hurtt (“Shadow Roads”), and artist Tyler Crook (“B.P.R.D.: Hell on Earth”) return to the world of backwoods horror in this haunting new series. Some Spoilers Ahead! 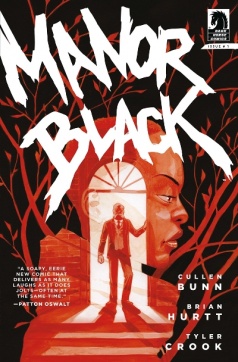 A group of teens running from something dark and terrible. A menacing, and bandaged person on their trail. An old man seeking to choose an heir to his mansion and fortune, or an heir to his curse? What horrors exist in the walls of Manor Black?

The issue opens in a blur of danger and terror. A small work van rushes and swerves on a back road, bathed in the darkness of night and the wooded areas that surround it. A group of men and a young woman named Ari are running, scared yet determined, to escape whatever is chasing them. Ari is holding one of the younger guys, named Taye. He’s injured and bleeding and knows he is most likely going to die. At this moment, a person with a face completely covered in bandages appears in the road. The driver jerks the wheel to avoid this mysterious invader and careens off the road, through a guard rail, and down into a clearing amongst the trees.

After this adrenaline pumping opener, the story jumps elsewhere. Standing alone is a dark, old house that in another life could have been bright and cheerfully rustic, but this is not that kind of story. The house looms large, looking like it could lean right out of the page at a moment’s notice. An old man with carefully combed white hair and a full white beard is lost in his thoughts. His young son is helping him set aside books he wishes to take with him (on a trip?). While there is no indication to whether or not this scene is a flashback or set at the very same night as the van crash, these characters come across as if they are living in the beginning of the 20th century. Old suits, sweater vests, ancient books, and an old home with furnishings that look like it barely made it out of the 1910s. Openly distracted the old man heads out of the house, across the property, and unlocks the gate to the family crypt. There is an enormous hour glass filled with a glowing red substance, a small council of dead people, and an empty grave that Roman walks past and makes a point of not looking at directly. At this point we begin to delve into some secrets about this man, who we learn is named Roman Black.

This is the type of story that Cullen Bunn and his “The Sixth Gun” partner Brian Hurtt excel at. Small towns, ambiguous characters, unknowable horrors, and lots and lots of questions. Every character that is apart of these mysteries speaks in short phrases, never letting us fully in on the conversation. Nothing is exposition heavy, because they are only speaking to characters that either know exactly what they are referring to, or are being kept on the outside. Horror stories with protagonists that are seemingly cursed or indebted to something terrible have a way of wrapping you up in a blanket of dread and these writers get that. Roman Black is a perfect character for this comic. He doesn’t come across as a villain or inherently evil, but he wants something. To achieve his goals he has had to make deals that have clearly taken a toll on him and will probably continue to take that toll after he’s dead and buried, either on him or his surviving family members.

As the mystery surrounding the group in the van, and the various questions arising from these scenes with Roman begin to intersect, the small town in which the story is set begins to get drawn into the horror and madness. About halfway through the issue we are introduced to a few members of the local police force. They’re local cops with little resources, but are down to earth and not looking to just brush the van accident off as just that, an easily explained accident. The writing gives us nice glimpses into their professional discussion and their personal interactions. None of these characters are anything out of the norm, but it is nice to have them in the story. The conversations between Gary, the first cop on the scene, and the sheriff are great. Playful banter that hints at a long standing friendship and professional respect. Bringing in characters that are not only an open book, but quite likable adds a nice inviting aspect to this book, that is mostly disinterested in bringing us into the fold.

Crook’s artwork is exactly what this series needs. He focuses on the human characters, giving them his signature look. Their faces fall in line with the likes of characters in the Sunday newspaper funny pages, soft and malleable. However, he conveys facial expressions and emotions in a way that is never expected from his more cartoonish style. His devotion to background detail, or lack of, allows for us to focus on every important moment that is shown. Characters, details within Manor Black, clues to what’s to come all leap at us from the darkness. It is perfectly executed. As black and white images, these panels and pages would still get the spooky message across, but when once he has fully colored each scene the scares and full emotional range is in place. It is all so creepy and equally gut-wrenching.

His use of shadows and small light sources is unbelievably gorgeous. This comic is filled with dark and secret scenes that generally focus on the darkness and a range of shades of a particular color. Shades of yellow and oranges within the manor, shades of blue ebb and flow from the shadows outside, the red light emanating from the hour fills the room like a gas-lit lantern, and various greens are used for the secret office filled with dead people. A frame showing Roman stepping through the gate and heading down the steps to the crypt is, simply put, perfection. His pencil work is not overly detailed, it’s more or less just given enough shape so we know what we are looking at. Blue night is shown fading behind Roman as he steps through the gate and various light sources are dancing off of the steps. And we only see the tops of each step, we have no idea what sort of pathway the staircase is set in. Everything else is coated in the black inky shadows. His work captures the mood of each page brilliantly.

Bunn and Hurtt put together an exceptionally confident script that stands more on looming terror and mystery than coming outright with monsters and explanations. Matched with Crook’s disturbing and sorrowful art, this is the kind of horror comic that fans of the genre hope for. The writing is perfectly paced, making for a quick and engaging read and the artwork drives the whole thing home and really brought up every necessary emotion from me. Fans of gothic horror will be disturbed and moved by this comic.

Final Verdict: 9.0, A perfectly creepy blend of old world horrors and magic. Bunn, Hurtt, and Crook deliver on a beautifully sinister premiere that is akin to Lovecraft, Blackwood, and Mignola.