“Manor Black” #4 wraps up the miniseries, pitting Ari, Roman, and Harvey against the Stranger, his followers, and a raging Fire Totem. Given this premise, it shouldn’t come as a surprise that this issue revolves around action and it leans hard on Tyler Crook’s art to deliver big moments. That said, what’s most satisfying about the action in this issue is the way it explores “Manor Black’s” central characters. Some spoilers to follow. 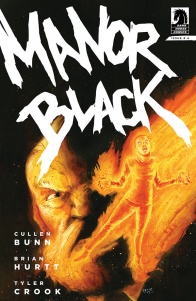 From the creators of Harrow County and The Sixth Gun comes this gothic horror fantasy about a family of sorcerers in crisis.

Tensions inside and out of the Black household come to a head as the young magician Ari contends with the attentions of sorcerers led by the malevolent Stranger and Roman Black’s own children.

“Manor Black” introduced itself as a series about the drama unfolding in the Black family as Roman Black searches for his successor. While that plotline certainly creates a lot of friction between Ari and the Blacks, it is not key in motivating Ari’s actions. In fact, it doesn’t even seem to be key in motivating Roman’s actions. As far as he’s concerned, there are more important things to worry about. In this final issue, the succession plotline is largely put on hold, and it frees the series up to leave behind its secondary characters and focus on its core cast. “Manor Black” #4 is a dramatic, action packed finale, and yet it frames the action so it’s always about the characters.

At this point we’re well aware what a curmudgeonly fellow Roman Black is, but in battle he releases something far nastier. We have seen Roman’s haughtiness and perhaps excused his behaviour somewhat because of the way he’s treated Ari, but here we see a side of Roman that so vicious, even the villain seems tame by comparison.

Likewise the way Harvey responds when he’s confronted with magic is very revealing. What he chooses not to act on is in many ways as important as what he does choose to act on. Again and again, Cullen Bunn and Brian Hurtt’s writing reveals character through action, even in moments when there isn’t a single line of dialogue.

My favorite element in this final issue was the Fire Totem inhabiting a furnace. It’s big and dramatic, and it moves explosively across the page. All that on its own would be great, but what really takes it to another level is that all of this has personality. The furnace is not just a force of nature; it’s a character. We see this most clearly when Ari watches the furnace when it thinks it’s unobserved. Despite its enormous size and imposing appearance, we can feel its fear and fragility. Damn good stuff. 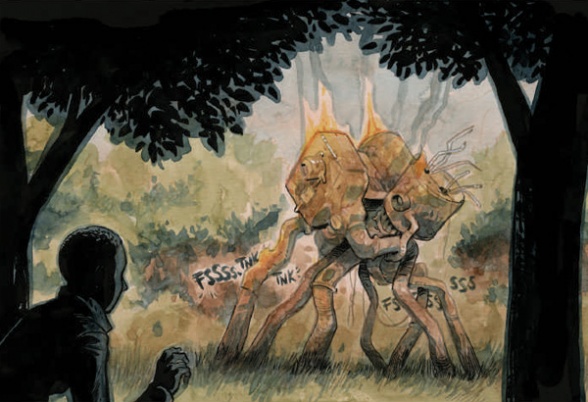 On a surface level this comes down to things like the setting; “Manor Black” is set in the present, not “Harrow County’s” iconic Great Depression era. But it goes far deeper than that. On a structural level, “Manor Black” doesn’t use narration at all, so the way it conveys information to the reader is markedly different. Often we’re spectators in a scene, with a point-of-view character that isn’t always immediately obvious. Dialogue works so that readers need to infer more about what’s being left unsaid. A glance from a character is sometimes all we need to ask a question.

For me, the biggest difference is in Tyler Crook’s art, especially when magic is in play. Blood magic is depicted in vivid reds, fire magic is bright oranges and yellows, and the nature magic of the wild sorcerers has its own distinct emerald green. When magic goes up against magic, there’s a war of color on the page. But this is hardly surprising. After all, you expect blood to be red and fire to be yellow. What’s really interesting is what Crook does with everything else on the page; magic drains the saturation out of the rest of the image. Reading “Manor Black” I was reminded of Pleasantville at times, especially in the raw power of color in a black and white world.

The source of magic sucks the saturation out of its environment's colors.

It makes magic feel otherworldly in a way that it otherwise wouldn’t. And the reason it works so well is because this approach to color isn’t just limited to the scenes with magic. Color saturation is a built-in part of “Manor Black’s” visual language that allows the book to communicate to the reader unsaid elements. Roman Black, Ari, and the other sorcerers can see the spirit of magic in the world around them, and this use of color allows the reader to focus in on magic the way sorcerers can. We’re seeing magic subjectively; Crook is using colors to talk to the reader the way narrative captions would in a series like “Harrow County” or “The Sixth Gun.” 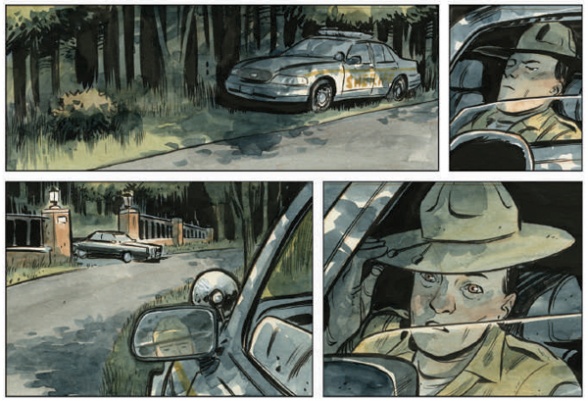 Restrained saturation in scenes without magic.

Crook even draws a distinction between magic fire and mundane fire. Just look at the difference between the fire when Harvey burns Ari’s file versus the fire when Ari is confronting the Fire-Totem in a furnace. One cannot be mistaken for the other. 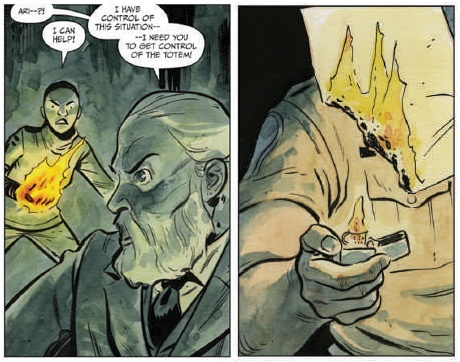 For a four-issue miniseries, “Manor Black” sure feels big. It’s got a large cast, plenty of intrigue, and the sort of world building that feels like we’ve only seen the tip of an iceberg. There’s more, so much more ahead. However, I feel this holds it back a bit, and in “Manor Black” #4, by narrowing the focus, the series becomes stronger.

Roman Black is right at the center of the narrative, motivated by his duty to safeguard the House of Blood and to prevent the forces of magic running wild. His scenes always propel the plot forward, but they tend to be brusque and impersonal. Ari is framed as the question at the heart of this miniseries, so even though her story is very personal, we experience it from a distance; we know a lot of people she cares about have died, and we see her rage as a reaction to this, but we never experience her grief directly. We get it secondhand as she tells others about it. Ari propels the plot by the questions we ask about her, but until this final issue, we only rarely experienced a moment of the story as she experienced it. (However, I feel like this final issue got to dig so much deeper, especially as she confronted the furnace animated by the Fire Totem.)

The emotional weight of “Manor Black” has consistently rested on the shoulders of Harvey, the new Birch County sheriff. When we experience plot points through Harvey’s point of view, they’re powerfully emotionally motivated. Think of how much impact Sheriff Washington’s death had on the series versus the deaths Ari’s fellow members of the House of Fire—not just in issue #1, but every issue after that. Through Harvey, we still feel the weight of Sheriff Washington’s death even in issue #4. Harvey is the emotional center of this miniseries; even in his smallest scenes, he commands attention.

In the four issues we’ve had so far, we know enough about Roman, Ari, Harvey, and Reginald to get some sense of who each of these people are, but other characters exist as little more than names—and in the case of Roman’s wife, she doesn’t even get that. At its heart, “Manor Black” is a gothic soap opera, and while it certainly delivers all the intrigue one would expect, I wish this first arc had found more room for character moments, even if it meant holding back on some of the world building or narrowing its focus. A four-issue miniseries is perhaps a bit too tight of a fit to introduce such an ambitious title.

While I’ve enjoyed each issue of “Manor Black,” I feel like #4 dug deeper into both Roman and Ari in a way that was more satisfying. I enjoy the plotting and the intrigue, but it’s the characters that really get me hungry for more. We leave “Manor Black” feeling like we’ve just finished a pilot for a larger series rather than a miniseries with an opening for more. Very little is wrapped up and left here “Manor Black” would feel starkly incomplete. There’s no question this series must continue, but what shape will it take? Will it roll into an ongoing series or will it continue on as a series of miniseries? For now at least, readers are left wondering.

Final verdict: 8 – The “Manor Black” miniseries leaves almost every single thread left dangling. This is not an ending; it’s a “to be continued…”