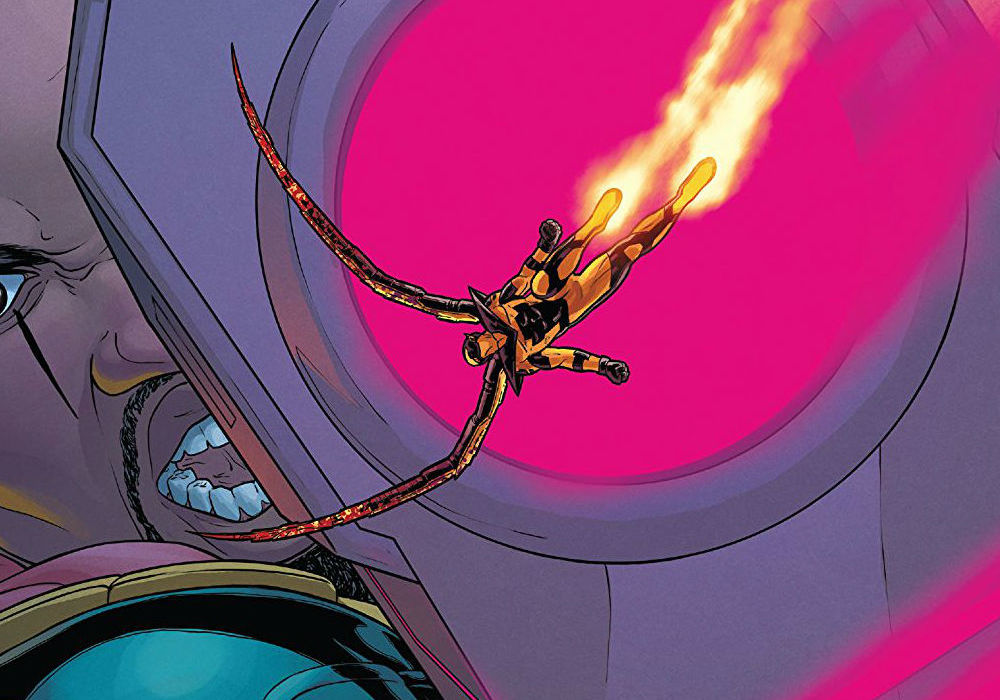 I don’t know about you but I’ve been enjoying the heck out of the Dawn of X line a.k.a. ‘How Mutantkind Got Its Groove Back’. It’s refreshing to see mutants living their best lives and moving in interesting new directions. I mean, we’ve got mutants in space! Apocalypse is a wizard now! You might think none of this would work but it has been, week after week. I, for one, had no faith in the whole ‘mutant pirates’ premise but “Marauders” is one of the strongest X-books out. Does the latest issue continue that streak? 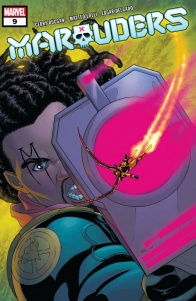 Written by Gerry Duggan
Illustrated by Matteo Lolli
Lettered by VC’s Joe Caramagna
Colored by Edgar Delgado
PEST CONTROL! A very small attack on Krakoa grows into something much bigger, thanks to Yellowjacket! Can Captain Kate’s crew swat him before his sting pays off?

“Marauders” #9 mostly revolves around Emma Frost and Bishop discovering and dealing with Yellowjacket, the microscopic villain who’s been hiding out in Pyro’s body and trying to gather some intel on Krakoa. On the edges of the story, some other plot threads are also moving forward. Lockheed, now seemingly back to full health, is on the move. Emma Frost and Jumbo were completely serious about hosting a Hellfire Gala. Most importantly, as the Red Queen’s crew feared, the resurrection protocols aren’t working for her.

The artwork is really good throughout this issue. Edgar Delgado provides bright, vibrant colors to accompany Matteo Lolli’s illustrations. The fight scenes are kinetic and full of energy. There are somber moments, such as Emma talking with Xavier in the Arbor Magna. There are hilarious moments, like Jean Grey posed like a pin-up model on a sports car. There are shocking moments, such as Yellowjacket blowing Pyro up to grisly, disgusting bits. This book has it all.

In this issue, writer Gerry Duggan holds up his end on the script side of things. Duggan pens an engaging and action-packed story. “Marauders” is just fun. Time and time again, it proves to be an enjoyable book. The tone of the comic reflects the premise of ‘mutant pirates’, it’s wild and chaotic, it’s an adventure. Even the data pages on the fringes of the story, recapping past events, are written with personality and inch the story forward. It also deepens the mystery of who the heck is behind the X-Desk?

The story is also on the unpredictable side. I definitely thought that the Yellowjacket probe would continue undetected for a good while in the background while Kate’s story would be the clear focus. However the Yellowjacket plot crashes and burns while the Red Queen remains in limbo…frustrating if you’re impatient like me. I mean, how is Kate going to come back? We all know she is but when? Why aren’t the resurrection protocols taking?

Most of the characters are great in this issue but I wish we could have gotten more from Bishop. In “Marauders” overall, I wish we got more of the character. He’s prominently featured but this could be a better showcase. In earlier issues, he was investigating but we didn’t get into any of the meat of his detective work, only the start and end. Over the course of the whole series, I remember him using his powers…once? Maybe twice. His power isn’t ‘guns’, you know. In #9, he’s basically just the muscle. Sebastian Shaw and the X-Desk guy are proving more compelling characters so far and that’s boggling. Lucas Bishop is a Great Captain as well as the Red Bishop of the Hellfire Trading Company. All the pieces are there, we just need them to come together.

On the other hand, Pyro is an absolute delight. Some mutants have struggled in their shift to the Krakoan lifestyle but this mutant’s all in. The pirate life really suits the wildcard. The moment where he burned Verendi was both a bit scary and hilarious, all at the same time.

Likewise, Emma Frost has been great. She does a lot of telepathic heavy lifting in “Marauders” #9, putting on a show for Yellowjacket and using her illusions as a weapon against Verendi as well. Duggan recognizes that the White Queen contains multitudes and doesn’t shy away from any of them. A businesswoman, hero, villain and mother all at once. Emma is menacing when she handles the little brats in Verendi and at the same time, a concerned and tender friend when it comes to Kate. That last bit is especially interesting to me. I got into comics right when Whedon’s “Astonishing X-Men” was four or five issues deep and their relationship was barely concealed hatred. To watch it evolve from that to a place of mutual respect to a genuine friendship has been fascinating. “Marauders” #9 definitely continues the streak.