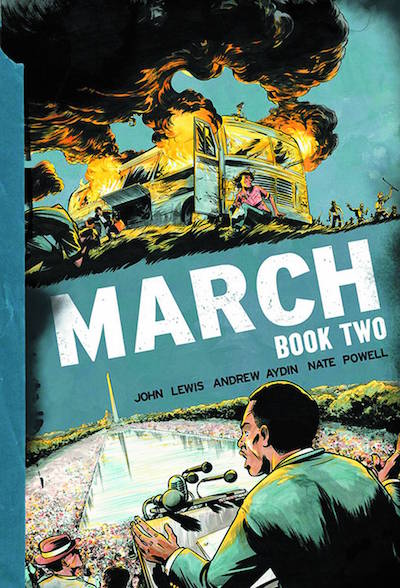 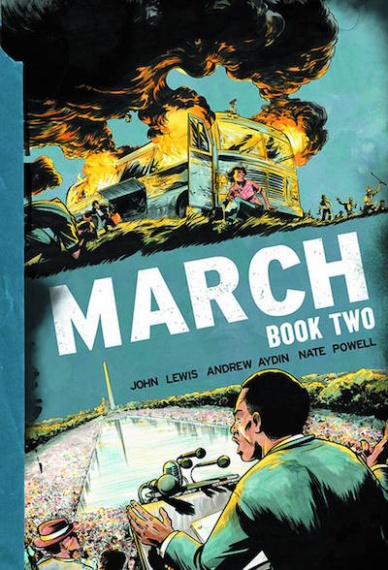 In comics, there are many star creators from varying backgrounds and experiences. You have the pure comic creators like Dan Slott who – for the most part – stick to doing what they do in comics. Then you have others who become hyphenates thanks to expanding roles in Hollywood, like Mark Millar and Geoff Johns. Others, like Gerard Way, come in and take the comic industry by storm after developing fame elsewhere.

Someone like Rep. John Lewis fits into the latter group, but he brings an entirely different category to life in the process. Lewis, who has a fabled history as a civil rights leader and as one of the most esteemed people in American politics, has a pedigree and story that goes beyond what the comic industry has seen in the past, and when the first book of his autobiographical comic “March” with co-writer Andrew Aydin and artist Nate Powell was released through Top Shelf, it rightfully brought in significant attention from atypical audiences. But was it good? Being revered is one thing, but being able to bring a story to life in a medium that one doesn’t have a lot of experience with is an entirely different idea.

Many awards and glowing reviews later, we know beyond a doubt: Lewis (with Aydin and Powell collaborating) is a natural, or at the very least, his story is a tremendous fit for the medium. Now the second book is out, and it continues on Lewis’s life story as a key member of the civil rights movement, all reflected against the inauguration of Barack Obama as the first African American President of the United States in 2008. Again, the question comes to the table: is it good? As one would expect, the answer is yes, it is tremendously good. Beyond that, it’s important, as it digs deep into the more haunting, troubling aspects of the civil rights movement, educating readers of all ages to what it was really like in the process.

That’s the part that astounded me the most. Not to reveal my own ignorance, but while I knew many of the major story beats and players of the civil rights movement, from “I Have a Dream” to Malcolm X, the details were something that were almost entirely unknown to me. In this volume, Lewis, Aydin and Powell deliver some of the darkest times of the movement, imbuing the pages of this book with both the importance and terror associated with the efforts of the Big Six, the Freedom Riders, and many others. Reading this comic isn’t like a standard comic experience, it’s like sitting in the front row as history was made, getting first hand insight into some of America’s darkest moments. At times, you feel as if you’re living within it, and it haunts you well after you put the book down.

Powell’s gifts as a cartoonist bring so much to this book, as he’s able to deliver the story in a way that both cuts some of the more violent elements of the story, yet digs even deeper into the pain associated with it thanks to his impactful storytelling and searing depictions of the people and places that were key players. Pieces like the hordes of people attacking the Freedom Riders are given a larger than life, cartoonish feel to exacerbate their outsized rage, making them both more intimidating but also more obviously and outlandishly villains. It’s a clever choice in a book filled with them, and it’s far more subtle than I give it credit for. Powell’s work in the past has been deeply personal, and in Lewis’s experiences, he’s found a rich vein to mine emotions and deliver them in full to readers. It’s a tour de force performance, and within these pages, you see even better work than we had experienced from him in Book One.

Bringing a story like this one to life can be difficult, as there can be difficulties balancing the idea of plot with connecting readers with the events depicted and the people who comprise them. How much time do you spend talking about more peripheral players? What do you include? Who do you remove for story flow? Telling a holistic view of the story and telling a compelling version can run in direct opposition of each other, and it’s a careful balancing act to not go too far in one direction. Having Powell directing the story visually helps immensely, but Aydin and Lewis do a remarkable job of giving this volume proper weight without making it feel austere. As readers, we’re with Lewis all the way, feeling what they want us to feel while we’re educated about the sacrifices and horrors so many members of the civil rights movement went through.

The level of restraint by them also deserves to be applauded, as signature moments like Martin Luther King’s “I Have a Dream” speech are featured but not dwelled upon. It’s a milestone, certainly, but not something the story is dependent on, and something like Lewis’s car accident on the way to being voted in as the chairman of the SNCC is given equal weight. After all, this is the story of Lewis and his experiences during the civil rights movement, not just the story of the civil rights movement. That gives the book a much more personal feeling, and because of that, it hits the reader much harder.

The storytelling is fearless throughout, never shying away from eruptions of violence like the one in “Bombingham” or even sharing the occasional slightly negative view on choices by Martin Luther King. Neither is used sensationally, instead, they’re used as facts that dot Lewis’s path that also gives it a much more authentic and engaging feel.

“March: Book Two” is every bit the landmark achievement the first volume was, but with a larger page count and a greater scope. Important, impactful and incendiary, the work of Lewis, Aydin and Powell can’t be ignored, and should be celebrated both inside and outside the comic book community for the bravery depicted on the page and for the exceptional craft in that depiction. This is a hell of a story, and one that hopefully lives on in future generations of readers as well.