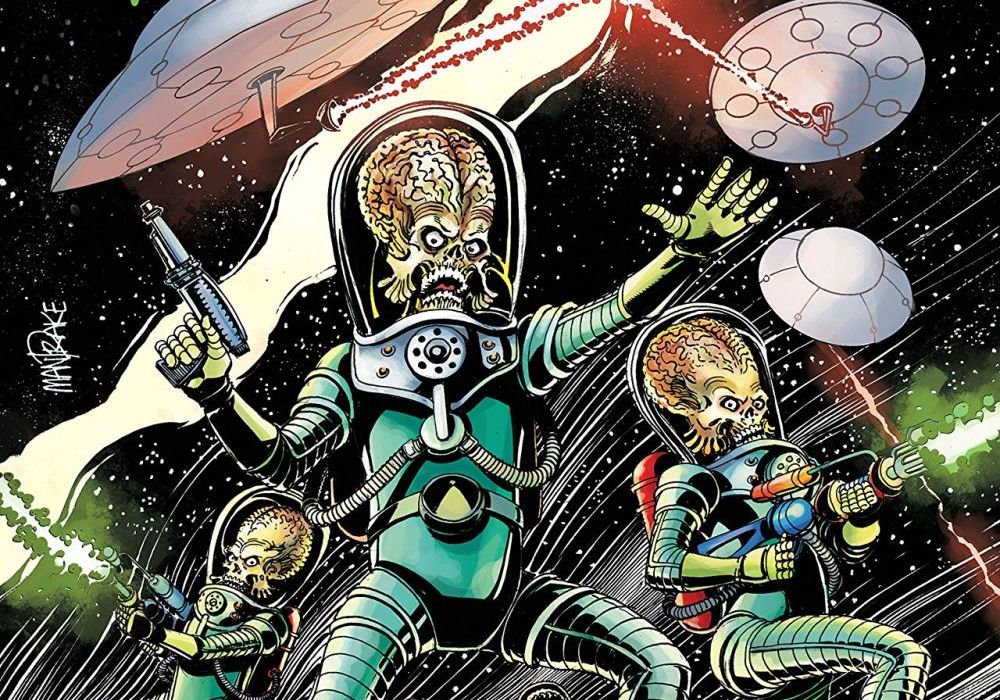 The 1960s card-game-turned-Tim-Burton-movie, “Mars Attacks” has seen some incredible longevity for something that hasn’t seen a huge amount of success. Now in the hands of IDW, the franchise sees a new comic reboot in the hands of comedy masters Kyle Starks and Chris Schweizer of “Rock Candy Mountain” fame. Does this series evoke what made the movie such a cult classic? 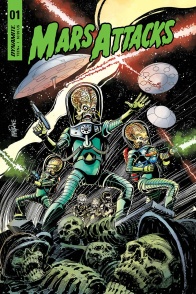 Spencer hasn’t finished a dang thing in his life. So, when he goes to visit his dad to see if maybe he can borrow some money, the last thing on his mind is global survival. Now Spencer and his father are on the run, trying to avoid being spaceray’d by a bunch of destruction happy Martians, heck bent on zapping them dead! Writer Kyle Starks (Rick and Morty, Rock Candy Mountain) and artist Chris Schweizer (The Creeps, Unbeatable Squirrel Girl) bring you the face melting experience of a lifetime with Mars Attacks for the first time at Dynamite!

Rather than pointlessly re-establishing the world and Martians for reader, Starks instead wastes no time in throwing you into the family dynamic of the main characters. The gist here is that Spencer, our dropout/deadbeat protagonist, is visiting his father for money after ‘quitting’ his latest job. Starks does a good job at portraying that personality in conversation with his father. He’s constantly side-tracking, bringing up trinkets from their Alamo trip and making up excuses about visiting. His father, Major Carbutt, is the hard-edged foil to all of Spencer’s laziness. AS a good father does, you’ll see him constantly calling out his son, whether it be reprimanding him for failing to get an escape car from the nursing home or simply saying “YOU LOOK LIKE A DAMN HIPPIE BUT YOU AIN’T GOT NONE OF THE IDEALS”.

However, Starks still gives them some nice endearing moments together, to make sure that there is something to salvage and build upon in later issues. When Major Carbutt goes on a trail earlier about how he has good memories of their Alamo trip, or when Major and Spencer simultaneously say “SHUT UP, SHIRLEY!”, or even the sheer joy of Spencer carting his father away from the scene in a wheelbarrow as the major shouts “GO, BOY, GO!”, we get a sense of that underlying father-son relationship coming back to surface in these dire times.

What separates “Mars Attacks” from most of it’s campy predecessors and peers is it’s unabashed tongue-in-cheek humor, and Starks makes sure to hit all the right notes here. A lot of this comes down to his relentless pacing, something that was developed well in his “Rick and Morty” writing and feels like a natural continuation here. There’s never any pauses to stop and laugh at a moment in the comic, Starks keeps the pace flowing as a way to mimic the dreary, unfunny nature of real life. He’ll have doctors and caretakers of the nursing home come around distributing quick and legal euthanasia to pretty much anyone who’ll take it, and the characters take it with a moment of shock before continuing to carry on about their situation. But then there’s also the simpler moments making up these quick beats that work just as well. At one point, the protagonists are running down a hallway, with accused Bingo cheat Shirley Watson claiming the end of days, so the Major shuts her down with a prompt “YOU’RE A BINGO CHEAT, SHIRLEY WATSON. I’LL SEE YOU IN HELL”. The final page really sticks the landing, however, with the President being told about the Martians’ devastating power and how hopeless the situation is. What really convinces the President to act, however, is that the Martians’ made his daughter cry. It’s quick-witted and silly humor, but fits in well with the franchise.

As Schweizer was only the colorist on “Rock Candy Mountain”, this is the first I’ve been exposed to his work, and his frantic yet simple style works exceptionally with Starks’ humor. What shows off this synergy between writer and artist strikingly is Schweizer’s excellent page compositions. It may appear deceptively simple, but Schweizer is adapt at giving moments enough real estate to give weight and balance to Starks’ jokes. Looking at the page where the nurse shows Spencer and his father the invasion on TV, we can see the page adds an additional panel as the rows go down the page, showing a stretch in time on each specific moment to extrapolate on each punchline. It’s no coincidence that the sequence describing the Martians as “LIKE ANGRY TESTES, WITH EYES” has the most real estate, but it works as it makes it wittier, and in some ways graver, than just a one-off penis joke. My favorite page of the issue would have to be when the pair are initially escaping the home. Schweizer draws a side-parallel scene for each panel, showing ‘progress’ between the protagonists as the page descends. What we get is a great scene showing the Major’s stubborn nature, playing his age and slow moving speed to great hilarity as Spencer darts all around him.

As a three-time Eisner nominee, it’s not surprising to see how easily and superbly Schweizer handles emotional work in this issue. Every character shown in this issue feels like they have a lot of depth just in the way that Schweizer handles them in different situations. Spencer is drawn most of the time with a happy-go-lucky grin, fitting in with his slacker attitude, but we see his mood slowly descend to terror and confusion as he’s gradually enlightened to the Martian’s acts of terror. The Major often sticks with a stony-faced, cranky visage, but he will often slip into moments of regret as he laments being in a nursing home, before moving back to sheer determination to get him and his son out of this nightmare scenario. Even the nurse, Doctor Inman, changes from delight, customer-service-smile happy to shock and disgust at the sight of the Martians. Through the pen of Chris Schweizer, everyone here has a second face and an ulterior motive, leading to a relatively simple sci-fi plot being driven by great characters.

Coloring is done by Chris also, but with support from Liz Trice Schweizer. It’s a relatively simple cartooning palette, given the art style and narrative tone, with muted greens and beige, all feeling like the set of a suburban 90s movies. The use of these colors especially in the nursing home really gives us a sense of the type of place this is without even having to directly tell us. There’s some nice lighting techniques used here too. When the pair are watching the invasion on TV, there’s a subtle, absorbing blue glow that seems to really suck Spencer in. Even smaller touches like having the palette become more pastel and contrasted when we see the town on fire conveys a more tense mood really well. The coloring here isn’t bombastic like big-screen superhero work, but is used subtly and well to help storytelling.

Kyle Starks, Chris Schweizer and Liz Trice Schweizer all show up here big time to leave their mark on “Mars Attacks” #1. This is a sharp-witted comic that still has a sense of soul between it’s two protagonists. Not only that, but the art is emotive and expressive, conveying Stark’s humor easily with great coloring to benefit the storytelling. This is the debut issue that will turn even the most cynical disbelievers of this franchise.

Final Score: 8.8 – A smartly funny debut with a lot of family-oriented heart at its center, “Mars Attacks” #1 shows that this franchise can still be great.