The Martian Manhunter has gotten the short end of the stick in the New 52 – removed from his Justice League founder’s position, relegated to the ghetto that was Stormwatch, and given a brief “Justice League United” stint, J’onn J’onzz has not had the chance to do anything out of the ordinary or special as a part of the DCU in quite some time.

That changes now. Keep reading for our spoiler-free review. 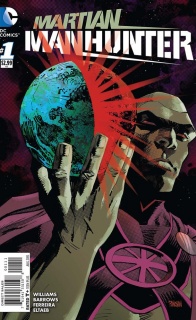 Shape-shifting Martians are invading Earth – so where is J’onn J’onzz to stop them? Trust no one as the Martian Manhunter tries to stop these ruthless alien terrorists from destroying everything!

Despite being, ostensibly, a super hero comic, “Martian Manhunter” is the closest thing DC has to a horror comic right now. This issue is cloaked in terror, starting with an absolutely chilling image by Eddy Barrows, and it ends with a very un-superhero sentence uttered by its titular character. Everything in between does its best to comfort and put the reader at ease, but some things are just so unusual that, no matter how exposed you are, you just can’t get used to it.

While I’ve enjoyed the work of Eddy Barrows before, this is by far his finest work. He embraces the outsider aspect of the character, and never shows J’onn at ease. Every action he takes seems to pain him, whether it is straining to shape shift or feeling shame for scaring a child. While J’onn is one of the most powerful creatures on Earth, his presence is not the majestic grace of Superman, or even the menacing shadow of Darkseid. J’onn appears as he is; an alien, a visitor, an interloper.

Barrows really plays up J’onn as a shape-shifter – he is always portrayed slightly differently, and wears his currently mental state on his face as he is shifting. When shifting into a dinosaur-like creature to help save a plane full of people, he is in pain; when shifting back to his ‘normal’ state, he looks worried. J’onn is often portrayed as stoic; this doesn’t really change here, but his stoicism is masked a bit by the weight of the world he carries with him.

Rob Williams doesn’t beat us over the head with this change; in fact, it is never really discussed. Like so many of the best writers, he has given his artist a script that allows the visuals to do the heavy lifting, storytelling wise. This issue could almost work as a silent comic for long stretches, and that isn’t to say that Williams didn’t write dialogue that is praise-worthy. He chooses, instead, to let Barrows shine, and to use the words to fill in the gaps of the visuals, instead of the other way around.

J’onn has always had more than a little bit of Batman in him; his alter ego is a detective, he is calm and not driven by emotion, and he even first appeared in an issue of “Detective Comics.” But his skillset has always been closer to Superman than to any other hero, and William and Barrows created a sequence in this issue that is straight out of the Superman mythos. With a plane going down, J’onn has to figure out how to save the passengers. Where Superman, twice on film, has simply willed himself the strength to stop it, J’onn doesn’t operate that way. First, he knocks out all the passengers on board, to calm them, and then he transforms into a horrific looking dinosaur/dragon that grips the plane in its clutches and lands it safely. The results are the same: passengers saved. But the process couldn’t be any more different.

As with many Martin Manhunter stories, other martians are the villains here. They, too, are shapeshifters, and are participating in an event called “The Epiphany,” set to colonize Earth for martians. This makes a lot of sense for this series – it gives J’onn even more of an outsider’s perspective, as he is neither tied in with the martians nor the humans. It also gives the readers, most of whom have never purchased a Martian Manhunter solo series before, an easily identifiable and relatable enemy, and one that is unique to J’onn. Sure, they could’ve imported a Superman villain, but this helps create an identity for J’onn that goes beyond a vague skillset and a costume.

The last page of the book brings about an interesting direction for the series, and one that has been (quasi) spoiled by solicitations. I’m not going to play into that here, but I applaud Williams and Barrows for going so big so quickly. The story they are telling is epic in scope – an alien invasion is about as far from the stakes of “Dr. Fate” or “Black Canary” as you’ll find – but it is rooted so deeply in the melancholy that surrounds J’onn, that it can seem almost suffocating at times. J’onn bears insurmountable guilt, fear, and responsibility on his shoulders – that makes an alien invasion seem almost manageable.

The 8-page “Divergence” preview told readers that everything they know about the Martian Manhunter is a lie created by J’onn himself. He has been building a look and a mythos around him that allows the world to fear and respect him. This issue furthers that thesis, and shows that he is equally a flying monster and a sad and misunderstood creature. But there’s a key difference between that lie in the preview and the reality here – we are starting to see the cracks in the armor. That preview began as a cautionary tale, one that warns the reader to not believe what they’re being shown. This issue ends as a different kind of cautionary tale, one that reminds us that sometimes it is better to remain in the dark, to believe the lies, rather than look deeper into the truth.

This book is inviting you in as a superhero title, but reveals its horrors quickly. The character lets you believe that he is a humanoid hero, but reveals that he can be anything he wants to be. By having their book be so clearly defined by fear and sadness, the creators are putting out a challenging read for fans to take a chance on. I beg that you do, as you’ll find few superhero books with as many layers or rewards than this one.