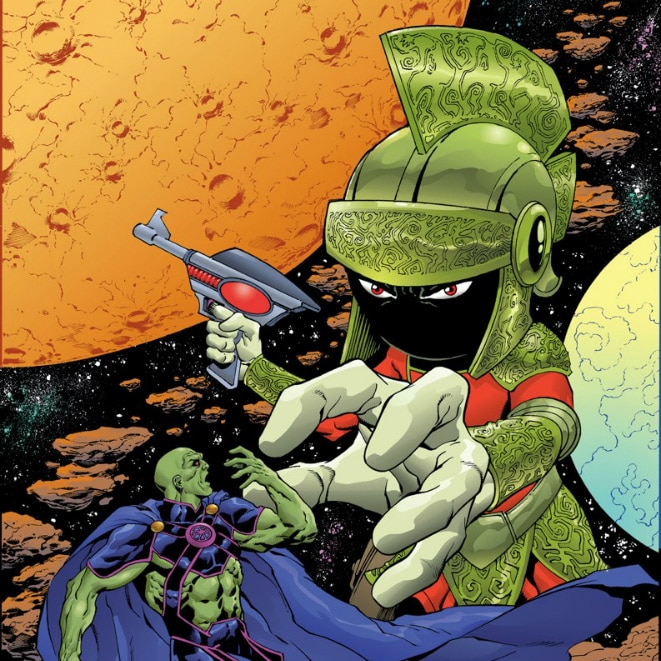 Mars. The red planet. Our closest planetary neighbor, and yet still so mysterious. We’ve often wondered what life on Mars would be like, and two of the most famous fictional Martians are J’onn J’onzz – the Martian Manhunter – and Marvin the Martian of “Looney Tunes” fame. So what happens when they cross paths? Let’s look on and find out. 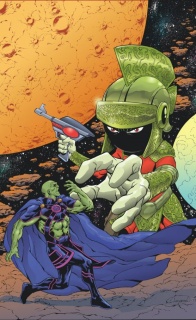 Martian Manhunter tries to halt Marvin the Martian’s determination for world domination. J’onn is conflicted with his own Martian identity as he attempts to stop the hapless, determined Marvin from blowing Earth to bits in order to gain a clear view of Venus. And the bonus Looney Tunes backup story features DC characters written by Jim Fanning with art by John Loter!

For the most part, the comic carries a tone appropriate for a “Martian Manhunter” comic; J’onn spends more than a few panels thinking about life, his loneliness at being the last Martian, and how he’ll defend the Earth in spite of it not being his first home. Yet Marvin the Martian manages to mesh with it well, due to his polite manner of speaking combined with his desire to destroy the world in an Earth-shattering kaboom; he provides a good foe for J’onn, as they can debate whether or not the Earth is worth saving while locked in conflict.

Additionally, the artwork manages to update Marvin the Martian to make him fit with the comic visually. His centurion-style design receives an upgrade, with new detailing across the armor. The broom crown atop his helmet is replaced with a metal fin, and his red undershirt carries more of a regal look to it, along with extra pieces of armor to add to its appearance. Even his expressions come through well, in spite of being a pitch-black face with a pair of large eyes. The body language, look in Marvin’s eyes, and the little creases Aaron Lopresti includes in Marvin’s design manage to convey his thoughts and feelings quite well, and makes him fit in the DC comics style.

Even some of the goofier items in his arsenal, like a flying saucer that comes from a “just add water” pill, get an artistic upgrade. Yes, the saucer is the most peculiar thing he pulls out, but at that point it doesn’t feel ill-fitting. Likewise, a stick of dynamite just needs a few science fiction-esque attachments and it’s suddenly completely believable as an “alluvium Q-36 explosive space modulator.”

I also quite like how J’onn refers to Marvin as “M’arvinn.” A nice little touch in giving it a DC Martian pronunciation.

Outside of Marvin’s design, Aaron Lopresti’s artwork is quite solid. There’s some fine detailing in both the character designs and scenery, and it even includes some intense moments where J’onn has to save a crashing plane or defend against tanks. The color work from Hi-Fi keeps things vibrant without getting obnoxious, and provides some nice gleam and shading to the outfits and technology. Overall, “Martian Manhunter/Marvin the Martian” works quite well visually, in terms of action, character design, and overall style.

Within the core of the conflict, we get to see the clashing ideologies of Martian Manhunter and Marvin the Martian (a sentence I never thought I’d be able to write – thank you, comics). It’s more than just Marvin wanting to destroy the Earth – we get to understand why. We see his resentment towards humans for how they used and exploited his Martians, which drove him to seek the destruction of Earths all over the multiverse. He’s not just destructive for the sake of being a villain to be thwarted, there’s a real cause that motivates him throughout the issue. Steve Orlando and Frank J. Barbiere have managed to take a cartoon villain and turn him into a real character, with reasons and a drive beyond his original design that remains true to the core of Marvin the Martian.

Thus, the conflict between Martian Manhunter and Marvin the Martian is not just one of brute force and Martian technology, but one of viewpoints and morality, as Marvin tries to show J’onn that humanity will neither trust nor accept him. All the while, their voices remain entirely consistent with their characters, down to Marvin’s “Isn’t that lovely?”

In the end, “Martian Manhunter/Marvin the Martian” manages to not only be a humorous crossover, but a character piece that gives us insights into both Martians. The character work is an unexpected strength and success for the comic, making it a strong piece for both DC and Looney Tunes alike.

Following the main issue, we get a little mini-issue by Jim Fanning, with art by John Loter. While the main issue brings Marvin the Martian into the style of DC Comics, the backup does the opposite, and turns J’onn J’onnz into a “Looney Tunes”-styled character, complete with comically large muscles and wide, goofy details.

This is a shorter piece, and one that’s far wackier, complete with plenty of cartoon-styled hijinks. While the slapstick doesn’t work as well in print as it does in animation, it’s still a funny little piece, and maintains the spirit of the characters and the comic.

Similarly, the artwork by John Loter perfectly matches that of the “Looney Tunes” cartoons. From Marvin’s massive telescope to the Martian dog K-9’s posture, everything has the look and feel of the cartoon style. It even includes brief cameos of Duck Dodgers and his Eager Young Space Cadet, as well as Bugs Bunny.

Thus, the backup comic in “Martian Manhunter/Marvin the Martian” is a nice breather piece, and perhaps more in-line with the wackier tone that one might expect going in to such a comic. No matter which one you prefer, though, it’s sure to be an enjoyable read.

Final Verdict: 8.1 – The two Martians meet in a surprisingly good blend of character work and art, resulting in a piece that hits with all the force of “an Earth-shattering kaboom.”