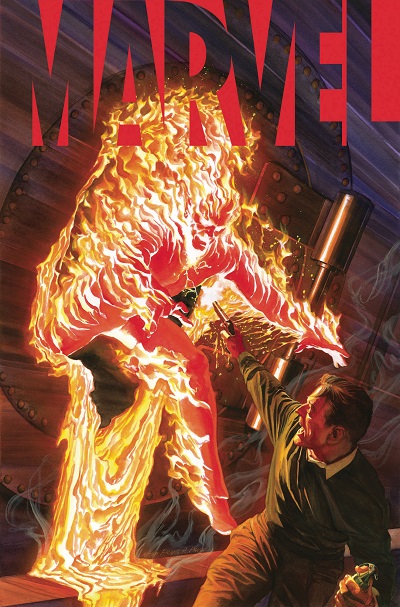 There’s been a lot of celebration of the original “Marvels” series by Kurt Busiek and Alex Ross lately, with the loosely connected “Marvels X” earlier this year and the line-wide initiative of one-shots coming later. Now, however, we’re getting an anthology title curated by Ross as he tells a story with several other acclaimed creators of superheroes doing what they do best. Let’s see how much this holds up in a modern context. 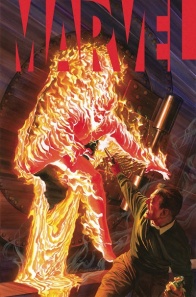 Thirty years ago, Alex Ross had a vision of a new series showing the Marvel heroes in a way they’d never been seen before. The first realization of that idea became the blockbuster MARVELS — but today Alex finally brings about his original vision: An anthology of stories by unique, exceptional talents, many of whom are doing Marvel characters for the very first time. Over this showcase series you’ll see work by such artists as Adam Hughes, Bill Sienkiewicz, Dan Brereton and more, linked together by an overarching story by Alex and Steve Darnall. This inaugural issue kicks it all off with superstar artists Frank Espinosa (Rocketo, Looney Tunes) telling an unusual Spider-Man story and Steve Rude (Nexus), teaming up with Kurt Busiek (MARVELS, AVENGERS) for an Avengers story, framed by Alex and Steve Darnall (Uncle Sam, Marvels) presenting a tale of the dread dreamland Nightmare, and his threat to the entire Marvel Universe…and possibly beyond. A once-in-a-lifetime assemblage of talent — you won’t want to miss a single page!

There’s an overarching plot here told from the POV of the “Doctor Strange” villain Nightmare, who almost acts as a malevolent version of Neil Gaiman’s Dream in this story. Here, we see Nightmare hopping from through fields of giant sleeping heads to explore different stories, giving his own creepy storyteller tone to the whole issue. The stars of the show here, however, are the individual stories that are told by way of Nightmare’s… nightmare exploring. The first here is a “Spider-Man” by Frank Espinosa, who is a master of the animation medium and veteran of ’90s Looney Tunes animating, with dialogue by Sajan Saini. Espinosa leans right into the dream-like quality of this story, giving a very surreal tone to the pacing and structure of the script. What we have laid out here is all of Peter Parker’s underlying anxieties coming to the surface, like being trapped in an endless struggle with a villain (the Rhino, in this case), who just repeats the same opening line over and over again: “Spider-Man! Our day is met!”. There’s also some compelling discomfort in the way MJ is constantly scolding Peter for spending all his money on web fluid and leaving it all around the city, but there is a nice resolution between them at the end of the tale that still keeps them playfully at odds with each other.

Espinosa’s art is the real draw of this story, however. The whole issue is texturally done with nice smudgy brushwork reminiscent of daub. It tonally combines some of the eccentric, kinetic energy of the classic Ditko “Amazing Spider-Man” work with the cinematic look of pulp-era movie posters, a palette mix that reminded me of those classic pinups from The Incredibles movies. This kind of art style also lends well to the dreamy quality of the story. Spider-Man himself is constantly flung throughout the panels in constant motion, with one of the best examples of this happening when multiple shots of him falling appear in sequence towards Mary Jane posed quite sternly. The background noise and colors also accentuate this idea, with flecks of color and texture appearing all around the panels, sometimes literally taking the shape of angry, fleeing mobs like on Espinosa’s second page, or mingling with Peter’s Spider-Sense to appear like some kind of grand, Lovecraftian horror. It’s a beautiful piece of work and my favorite of the two stories.

That being said, Kurt Busiek and Steve Rude are by no means resting on their laurels when it comes to their “Avengers” story in this issue. The team here is evoking some very classic Stan and Jack stories here, with great punchy silver age dialogue that strips away the fat of that era and keeps things exciting. Busiek has spent plenty of time with these characters before, so he is pretty much able to nail each one of them with scant few lines. Things like Ant-Man saying “That’s not the sort of thing you expect to see at breakfast!” and Wasp saying “Pff! Just boys and their toys, that’s all.” are perfect at giving readers enough as to what makes these characters tick. The plot is delightfully joyous in how it leaps from one point to the next, constantly building the stakes more and more. It’s almost as if Busiek is saying, oh you don’t think the Hulk vs the Avengers alone is exciting enough? What, then, if The Hulk image-projected his own Hulked-Out versions of the Avengers to fight with him? It’s that kind of zany silver age fun that makes this story enjoyable without feeling as dense as some of the original stories can feel to modern audiences.

Rude’s art is a clear and expert riff on classic Jack Kirby Marvel work here and it’s beautiful to look at. Rude nails that busy yet exciting feeling that was rampant in old-school comics, where there’s few blank spaces to be seen and almost everything is interesting to look at, yet you never feel distracted by any one element. Shots like the Avengers reacting to the alarm going off exemplify this: it’s barely half a page long, but the panel fits in six different characters, all reacting to the alarm in their own ways but not so shocking that it distracts from the story’s flow. Panel structure and visual composition also work really well here, especially when the Hulk is really going ham on the team. There’s a shot with The Hulk preparing to throw a car at Captain America, who’s backed into a corner both figuratively and literally thanks to Steve Rude having the character literally pushing against the corners of the panel. The colors here by Steven Legge are solid enough, using simplistic palettes and bold colors, but the soft shading and somewhat muted tone take away from what could have been a beautiful silver age throwback piece, flat shading et all.

Ultimately, “Marvel” #1 is a good excuse to watch veteran creators from the medium do what they do best, and have fun doing so. Frank Espinosa’s “Spider-Man” story is a great ethereal and dreamy story that feels like it really digs into and understands Peter Parker’s psyche, whilst delivering some great visuals. Busiek and Rude’s “Avengers” story isn’t quite as immediately thought-provoking but is a super-fun romp that captures the tone of those silver age Marvel tales perfectly, whilst trimming all the fat. This is an unmissable issue for fans of that classic Marvel Comics style and panache.

Final Score: 9.0 – A great anthology title that shows off renowned creators having a blast on the superheroes they know and love.