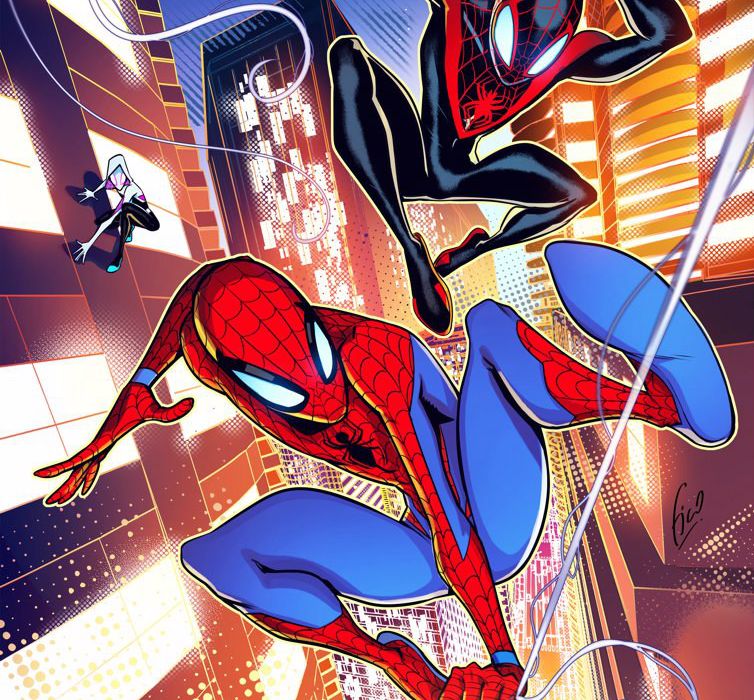 Spider-Man is one of the most beloved superheroes across all ages, so to have the hero lead the All Ages Marvel Action initiative at IDW makes complete sense. Having YA author Delilah S. Dawson raises that profile another notch and with fantastic art from Fico Ossio and Ronda Pattison, this seems like a star-studded cast of creators. Does it live up to the hype? 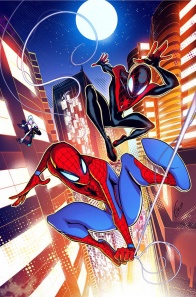 Readers of all ages can get tangled up in these all-new adventures of Spider-Man and his astonishing friends! Peter Parker has thrown down with deadly villains and legendary heroes, but high school life might be his greatest challenge yet. Luckily, he has a shot at making the grade with a little help from his new friends… Miles Morales and Gwen Stacy! A Marvelous new era begins here!

What stops a lot of readers, old and young, from entering comics is the seemingly impenetrable continuity embedded in mainstream lore. “Marvel Action” looks to remedy that, presenting a wholly new and easily accessible continuity where Peter Parker, Miles Morales and Gwen Stacy seem to co-exist as spider-powered characters. Dawson handles this well, having the story start in act two of Peter Parker’s life as an established, yet somewhat bumbling Spider-Man. All we have to know is that which is already presented in the first sequence. Honestly, you don’t even need to know that Uncle Ben died for Peter to become Spider-Man (spoilers? Or maybe it hasn’t even happened in this world yet?). Dawson makes each character feel unique and bounce off each other well, too. Peter, as mentioned, is a little awkward and not super confident in his superhero role just yet. Miles is shy, yet comes to life when in the middle of a brawl with snappy comebacks. Gwen is consistently cool, not resorting to spider-powers yet, but always getting in the middle of sticky situations with her journalistic know-how. It’s all solid characterizations and works well at making newer readers comfortable.

The characterizations take center stage in a good and bad way, however. It’s great that Dawson has given the spider-people such definitive personalities from the get-go, as it gives readers something to latch on to, to come back and watch develop in later issues. However, what’s sacrificed is the little worldbuilding and plot details. When we get to Peter arriving at the Daily Bugle to start his internship, the tables are sorted by whether you like Iron Man, Captain America, Black Panther or Spider-Man the most. It’s funny to see that none of the protagonists pick Spider-Man, but a little shallow that they all pick Iron Man and works as a strange and decidedly disorganized way of sorting a classroom. They’re given the simplistic task of interviewing a classmate about themselves in order to win the award of meeting Tony Stark, of which Betty Brandt asks for these ‘stories’ in her inbox by the following week. It’s a little contradictory and doesn’t seem to follow a clear tone, and although this may also be stories for younger audiences, it still should be able to hold up and be enjoyed by older readers in terms of consistency.

Fico Ossio handles art duties, delivering a hyper-kinetic, fun blend of manga and western art styles. As soon as we get to the first page, we see a panel of Peter whizzing in costume from a rooftop amongst a backdrop of blurred skyscrapers. It’s the classic Spider-Man introduction, but with a modern polish for a wider reader base. Ossio keeps the action fluid and fun from this point, having Peter leap around constantly in a state of flux, never quite resting in a static position, even when talking to a civilian. Even in classroom scenes, Ossio keeps things lively, with each of the protagonists having distinct body language to give them a sense of individuality and believability. Peter is always leaning towards Miles, eager to make friends, while Miles sits back a little more relaxed. Gwen sits to herself mostly, looking a little hunched and closed off, but with an air of intrigue about her that fits with her character dialogue.

For a comic aimed at all ages, especially children, it’s important that the art looks cartoonish and expressive and less angsty than mainstream superhero comics, which Ossio handles with ease. For a start, every character is believably proportioned and actually looks suitable to their age. Peter, in his first appearance, is well-built, but a little short looking and lither than the typical Captain America type. This is well contrasted from the adult characters, who can range from lankier folks like Joe Robertson, to the stocky hot-dog consumer flinching from one of the mutant animals in the street. The protagonists all look interesting emotionally during the class time, however, there’s definitely more diverse range in Peter, scaling down there to Miles and finally to Gwen. Peter gets to move on the fly from eager enthusiasm to nervousness to solid concentration, while Miles does a similar range but with subtle differences. Gwen, unfortunately, has the same cheesy grin plastered on her face in every panel of the class scene, and it makes her come off as a little flat.

Ronda Pattison has a super clean coloring style that looks right at home within the mainstream Marvel universe whilst looking vibrant and appealing at the same time. The use of lighting in scenes is often the show stealer, popping up right at the start with a beautiful usage of glowing yellows to convey the streetlights that Peter is rushing to in his freefall. This gold highlights the daytime scenes too, working as a morning scene setter when Peter wakes up late to his internship, to highlighting the urban jungle of Manhattan in the scene where mutant dogs are attacking civilians. It’s used best and subtly in the alleyway scene where Miles is brawling with one of the mutant animals, using the light to cast a subtle glow in the corner of every shot, lighting up the gloomy setting and highlighting Ossio’s clean action. It’s clever use of lighting to give the book a more all ages feel but also look stylistically pleasing at the same time.

IDW’s “Marvel Action” line launches with a bang with “Spider-Man”. Dawson’s characters have great energy individually and palpable synergy together. There are a few story hiccups, however, but it doesn’t take away from the overall charm of the issue. Ossio and Pattison work together to make a visually fun and slick, fast-paced action visual style, resulting in one of the most easily accessible, yet still hearty and fun Marvel books of late.

Final Score: 7.0 – “Marvel Action: Spider-Man” #1 is a great all-ages debut, with only a few plot and visual setbacks that never detract from how charming this book feels.