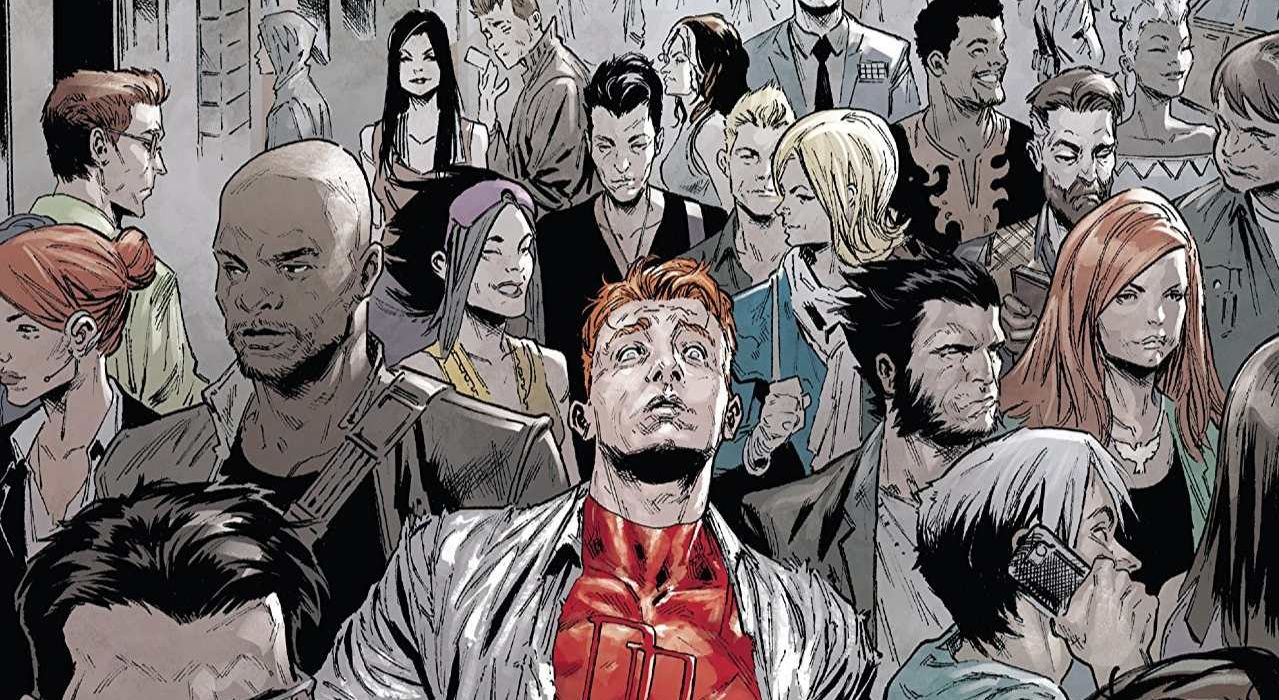 “Marvel Knights 20th” celebrates the turn of the century imprint with a brand-new story from the team of Donny Cates and Travel Foreman. How well does this issue work, both on its own, and as a celebration of the original Marvel Knights line? Read our review to find out, but beware, as there are some mild spoilers. 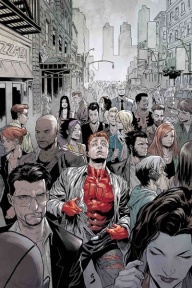 Written by Donny Cates
Penciled by Travel Foreman
Inked by Derek Fridolfs
Colored by Matt Milla
Lettered by VC’s Cory Petit
In celebration of the legendary imprint founded by Marvel’s CCO Joe Quesada, a new crop of talent stands poised to tell a groundbreaking story across the Marvel Universe! In the cemetery, the blind man does not know who he is, or why he has come to this particular grave at this moment. He doesn’t know the burly police officer with the wild story who has approached him. Or the strangely intense man who sits in the rear seat of the patrol car, his eyes flashing green. But all of that is about to change.

While Donny Cates is a writer of many talents, perhaps his most impressive ability is the way he is able to craft hooks for a series. Cates first issues have a pull to them that is missing from so many other super hero books. There is a sense that anything can, and probably will happen. A feeling that at any point, the train could go careening off the rails, and yet, so far, it never does.

“Marvel Knights 20th” is no exception. The issue opens with Matt Murdock in a graveyard, his hand resting on the grave of Karen Page, his memory empty. As the story slowly unfolds, Cates shows the reader that it’s not only Daredevil that has lost his memory, but that the entire Marvel Universe has forgotten their heroes. It’s an intriguing premise, one that pulls the reader in both though the mystery of it set up, and the questions that it poses about the heroes. On the most basic level, the series makes readers wonder what is going to happen. How did these heroes lose their memory? How will the manage to get it back? But on a deeper level, it begs questions about these characters. Who is Matt Murdock, if he doesn’t remember any of the tragedy that has befallen him?

Cates creates series that have fantastic elevator pitches, and then follows through on them. I wasn’t sure what exactly to expect going into “Marvel Knights 20th,” but with in the first couples of pages, I was hooked. The opening to the book, with Matt Murdock in a graveyard, being confronted by a police officer Frank Castle, are so intriguing that I poured through the rest of the issue and cannot wait to see where this series goes. The book sets up questions, and then follows through on them wonderfully.

Most of this issue follows Matt Murdock, without memory, trying to figure out what is going on with himself. One of the most interesting choices in this issue are the way the art time chooses to portray the Daredevil’s senses. There are only two panels in the issue that go into the traditional, red lined portray. Travel Foreman and Cates make great use of this technique, first deploying it to show that Daredevil still has all his powers, and then saving it for later in the series, to help deepen the mystery of what is going on in the world. It’s a great artistic choice, the kind of understanding of the characters that I’m excited to see going forward.

The art, by Travel Foreman, is a prefect match for Cates story, and the book as a whole. Foreman’s pencils, along with the inks from Derek Fridolfs, are moody, creating characters that feel tortured and lost. The way that Foreman renders the rain of the scene, and the heavy shadows that Fridolfs adds with his inks work to make a mood that, more than anything else, helps to replicate the feeling of the original Marvel Knights stories.

The colors, by Matt Milla, help with this as well. In the opening scene in the rain, Milla uses the juxtaposition of the cloudy skies and Frank Castle’s flashlight to highlight certain parts of the scene, putting emphasis in the panels, and keeping the entire scene dark and moody. Later in the issue, Matt is visited by an unexpected character, and Millia creates a similar effect of light in the darkness, to make this character almost glow from within. The colors throughout the issue help to create a feeling of darkness and displacement, that works really well for the story of “Marvel Knights 20th.”

As I said at the start of this review, Donny Cates knows how to create a first issue. “Marvel Knights 20th” pulls the reader in with mystery, and by the end leaves them wanting more. I’m excited to see where this series goes as it continues, what Cates has in store for these characters, and what the voices of other creators will bring to this story. Overall, this is an issue that is very entertaining, and while not directly related to the original Marvel Knights line, works as a tribute to the tone and type of stories told with that imprint.

Final Verdict: 8.0 – Donny Cates and Travel Foreman create a mystery that leaves the reader excited to read on in “Marvel Knights 20th”