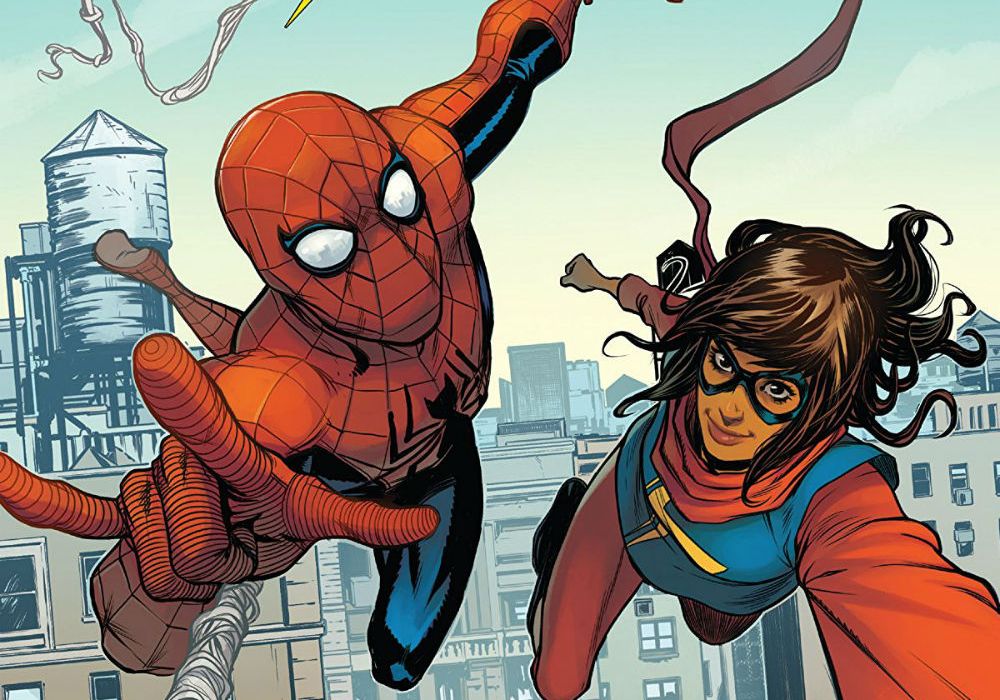 With this most recent volume, “Marvel Team-Up” embraces one of this generation’s most remarkable characters, while at the same time using the medium’s own possibilities to make something unique. But, beyond that, is the story and art a stand out? 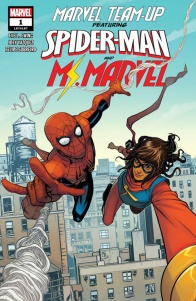 THE CLASSIC MARVEL TEAM-UP RETURNS! After a science demonstration at Empire State University goes awry, Ms. Marvel and Spider-Man find themselves tangled up in the same chaotic adventure. Is it destiny? Or disaster?! Eve L. Ewing (IRONHEART) and Joey Vazquez (SPIDER-GEDDON) team up for the first thrilling arc of a mind-bending and magnificent new series!

“Marvel Team-Up” has been traditionally a series where Spider-Man serves as a proverbial host to a rotating cast of characters from all of the corners of the Marvel Universe. This time around, though, all signs indicate that he’ll be sharing the spotlight (or handing it over completely) to Ms. Marvel. This inaugural issue flexes the muscles on how that balance can work, both from a core plot perspective, but also from a quite different narrative tool.

Getting that out of the way first. “Marvel Team-Up” reads both forwards and backwards. What that means is that a reader can start from page one and progress until the middle, or begin from the back cover and make their way towards the same mid-point. Each tale focuses on the points of views of Ms. Marvel and Spider-Man, respectively, with both lines converging at the climax of the actual team-up of these two heroes. This narrative tool is exciting and inventive, and one that could hardly work in a medium outside of a comic – and a printed comic at that. Those experiencing it on digital format will lose some of that punch, but the creativeness of the approach is more than a novelty and actually demonstrates interesting parallel structures for the story as a whole.

Vazquez’s art is capable, but it lacks any quality that makes it truly special, at least on this issue. His character portrayal is fair, with a clear representation of emotions, even if it becomes a bit exaggerated at times. The artist did not have a lot of room to demonstrate his style for action (other than a larger moment towards the middle/ending), but where he can demonstrate that, his drawings are kinetic and dynamic. Other than that, the quieter moments of “Marvel Team-Up” #1 are a bit dull, with the sections on school buses, conference rooms, and other mundane settings having little to none distinctive features.

Sobreiro’s colors, though, are quite a highlight of this issue, reinforcing some of the best moments of the narrative. There is a specific occurrence towards the end (which shall remain unspoiled) that revels on the artist’s choices for palette, for great success. Fans of Spider-Man, Into the Spiderverse will connect to this effect very quickly, which speaks volume of his ability and not needing to rely on actual animation to convey motion.

Back to Ewing’s structure and plot. Beyond the smart choice of framing a team-up book on a literal convergence of characters on the printed pages, the rest of the issue is fairly pedestrian. Yes, Ms. Marvel and Spider-Man are properly introduced and handled, with nothing jumping in terms of consistency. But both titular leads feel like generic, diluted versions of themselves, with no action or decision making that are likely to stick with the audience after the end.

More than the characters, the main story beats of the script are elements presented several times over in recent years. The exciting school trip to an event that will most surely end in disaster. The younger hero excited for an interaction with a more experienced peer. The well-intentioned scientist being flustered by an evil, megalomaniacal villain. True, after decades of tales, all comics can fall into their tropes, but the best modern entries offer a component or two that set them apart.

Finally, the ending, which this review will not cover into the detail, adds some insult to injury. It is such a worn-out plot device, so vastly used across a number of mediums, that a lot of readers might shrug off the series altogether towards the end.

All in all, “Marvel Team-Up” is an unbalanced first issue. It does some things that are truly unique in terms of structure and leveraging on comic’s key strengths. Its colouring is remarkable and one of the best aspects of its visual flair. But, unfortunately, its more trivial plot choices and even the art itself on settings and characters, fail to make it something that will linger on reader’s minds for long after they put the comic down.

Final Verdict: 6.1 – Despite some inspiring structural choices, “Marvel Team-Up” #1 runs the risk of becoming lost on today’s market, by not connecting with the audience with anything out of the ordinary.