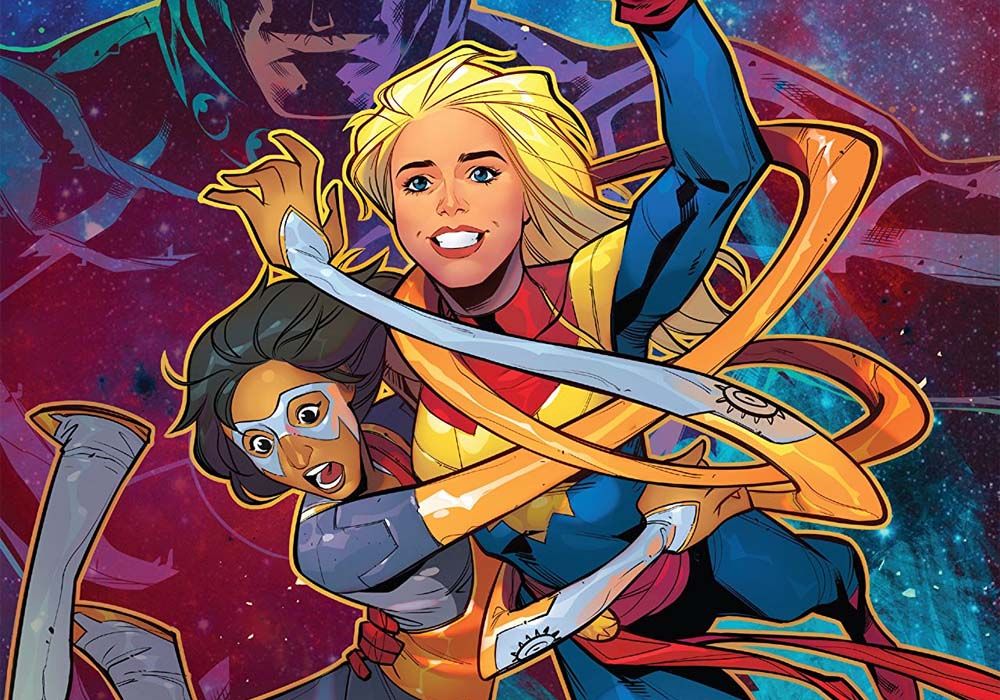 Marvel’s revamped anthology title, the aptly named “Marvel Team-Up”, has been a tonne of fun with writer Eve Ewing on board for the first arc. Now, we’ve managed to score Clint McElroy paired with “All-New Wolverine” artist Ig Guara for a story involving both Captain and Ms. Marvel. Let’s see how the Adventure Zone mastermind handles these fan-favorites. 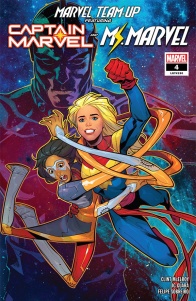 A BRAND-NEW STORY BEGINS HERE! The sudden reappearance of Mar-Vell, the first Captain Marvel, draws Carol Danvers and Kamala Khan back together for an out-of-this-world adventure! But is the man behind the mask who he claims to be? And can Ms. Marvel and Captain Marvel stay on the same page long enough to find out? Podcast superstar and Adventure Zone scribe CLINT McELROY and ALL-NEW WOLVERINE artist Ig Guara take the reins of an electrifying new team-up tale!

It’s little surprise to me that McElroy knows his way around dialogue and voice. The voices he has for every character, down to the throwaway security guard in the intro who’s insecure about his wife’s Paul Blart: Mall Cop teasing, all feel unique and interesting with stories and histories of their own. Kamala feels very much within her charming and clever character. She stands up for her hometown, she’s wildly melodramatic and she’s very much a nerd. I also may not be caught up with everything in her latest ongoing, McElroy tells us enough detailing so that we don’t feel lost, weaving her recent grounding from her parents cleverly into the narrative. I just don’t 100% buy that she would know about Starfox the video game and not the Avenger with her encyclopedic hero knowledge, and I know that it’s a small detail but it takes me out of the narrative somewhat. Carol, however, feels pitch-perfect, balancing her role model status by being authoritative and strong whilst also being coy and knowing, especially as she essentially helps Kamala call sick for her grounding.

McElroy also gets a good balance on taking some of the best from both characters’ worlds for this issue. Whilst I feel like we could take a little more from Kamala’s side, we do get a great cultural debate between Carol and her family. McElroy’s voice for Kamala’s mother is a lot of fun, as she’s super stubborn about her daughter’s safety, retaining an air of skepticism about Carol’s words when her charming albeit gullible father accepts them with little resignation. The whole scene is so charming, especially with Kamala’s short interjection, that I would honestly love the issue if this was the entire discourse. We do get a nice contrast in Carol’s more cosmic background, which deals in similar familial themes in that she too had a highly protective mother. Some aspects are pulled from more recent continuity, like the vicious Kree Kleener, who casts a terrifying shadow over the whole issue, whilst some of the other Kree villains feel a little hokier. This works for the Kree Mandroid, who’s delightfully pulp sci-fi influenced, however, the Supreme is almost too silver-age and comes off as dated and not particularly menacing, especially in its leering dialogue. The reveal at the end is interesting too, but it’s kept too last minute to feel substantial enough to comment on in this issue.

Ig Guara is such a vibrant artist, bringing a lot of visual energy to this book. The settings here really nail that suburban-meets-sci-fi tone that the modern Marvel universe, and very specifically, “Ms. Marvel” books have been going for. The Damage Control security room feels like a compact Area 51-like room, with rows of boxes and scientific vats that later on turn into sleek, alien-like monoliths. Kamala’s home also looks perfectly in tone with the representation in her own book, with Guara adding neat little details to give it his own sense of character. The addition of copious frames on the wall, down to the super clean dining table and perfectly aligned lamp cords on the floor makes a lot of sense given the strict nature of Kamala’s parents, and do a lot to give the reader that menacing-yet-caring parental tone.

Yet, like any good superhero tale, what we’re here for is the high stakes emotions and action, which is what Guara really delivers on. Kamala feels like a teenager with her bravado and intense care for her neighborhood, which is shown through shots of her intense concentration, whilst Carol looks very much like the disgruntled caretaker, flashing Kamala looks of annoyance but sparsing them out with little hints of gung-ho excitement. There are moments, however, when Guara makes the emotions a little too drastic and comical, like Kamala’s extremely dismayed visage when speaking about her curfew, and Carol’s look of almost comical shock when reminded of her recently-passed mother. The action, however, is fast-paced and unrestrained, with Guara really channeling some manga energy especially in the third act battle. Each panel of this is a perfectly captured snapshot of the contenders in some wild choreography, surrounded by speed lines and energy blasts, and it’s unabashedly fun.

Felipe Sobreiro handles colors, delivering a shining, vibrant and delightful palette through the entire issue. He uses a style of shading with lots of whites to make every character shine and stand out from the already colorful backgrounds, which looks wonderful in scenes like Carol carrying Kamala through the New Jersey suburbs. Sobreiro also uses color expertly to signify certain situations or tones. In the very first page, when our security guard Paul is attacked, the background flashes from a calm blue to an aggressive orange, showing readers immediately what to look for when the action shots take place. This palette continues effectively throughout the issue, with the suburbs and households using more cooler, blue colors, the background being a light orange when the duo are on patrol and on alert, and the last few pages with the Supremor/Mandroid fight taking on a fully-blown firey orange tone, working super well in the nearly full-page shot of the Supremor shooting his tentacles (ew) at Kamala.

McElroy proves to be a great fit for the Marvel universe as he pairs with Guara to make a book both charming and action-packed. The characters are well voiced, with some light slip-ups, the interactions are a lot of fun, and the book feels full of energy visually, with high-intensity emotions and top-speed action. This leans hard into being a super-fun superhero story, and I’m all for it.