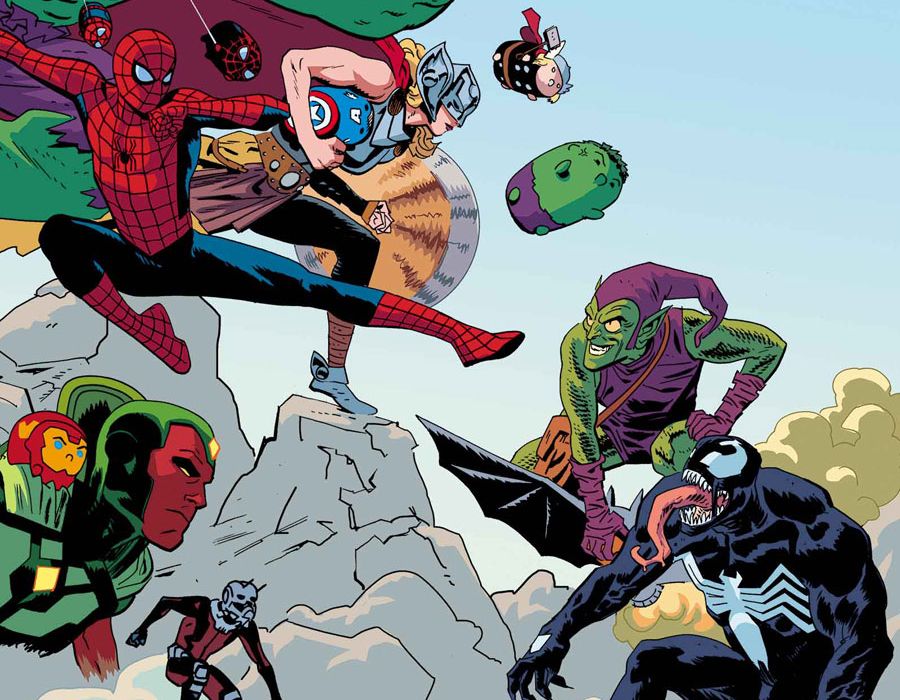 Tsum Tsums have invaded the Marvel Universe. No I don’t know what that sentence means. But, uh, I guess we’ll find out what a Tsum Tsum is together in our review of “Marvel Tsum Tsum” #1. Spoilers ahead, for those of you who were really looking forward to this comic. 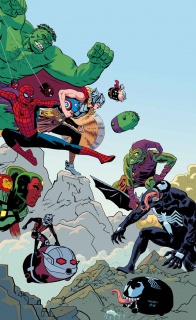 In case you’ve been living under a rock, Tsum Tsums are HUGE! Well, not LITERALLY (they’re actually pretty tiny) but these seemingly cute and cuddly creatures are sweeping the globe! So what happens when these pint-sized piles of fur find their way into the Marvel Universe? After a crate of them falls to Earth en route to THE COLLECTOR, one small group of Brooklyn teenagers will find out! Featuring all of your favorite Marvel heroes and villains, this is sure to be TSUM-thing you won’t want to miss!

I think this review has taken the most research out of anything else I’ve ever written for Multiversity Comics.

As far as I can understand, Tsum Tsums are a series of toys sold by Disney that are deformed cute versions of their characters that come in a meat tube shape like they’re Soylent Green. The name Tsum Tsum is apparently a bastardization of the Japanese phrase “tussle” which means “to stack”. That’s because you’re supposed to buy enough Tsum Tsums to stack on top of each other. So they’re Funko Pop dolls but somehow uglier and for people who don’t have desks they can just put toys on. They’re like Beanie Babies if everyone knew from the outset how worthless they’d be.

At least that’s the case in our reality. In the Marvel Universe, Tsum Tsums are cute alien creatures that can replicate any marketable characters they see. These tube children end up on Earth because the Guardians of the Galaxy interrupt a space trucker with a cockney accent(!!!) trying to deliver a shipment of Tsum Tsums to The Collector. If you want to know how Tsum Tsums have been a thing since 2013 it’s because The Collector has been purchasing them by the truckload.

One of the crates falls loose and lands in Brooklyn where it’s found by a trio of teenagers: Albert “Bert” Eagle, “Duncan “Dunk” Diggs, and Holly Hae. Albert’s obsessed with taking a picture of every super hero out there. I don’t know if that includes Punisher 2099 but I can only hope so. Bert has also mentally rewired himself to replace all of his curse words with adorable phrases like “Melon Farmer”. He’s kind of perfect. Dunk’s passion lies in actually becoming a superhero and he’s tried to achieve that by standing in open traffic waiting for his mutant powers to activate and by microwaving his clothes so he’d be constantly exposed to radiation. He is perfect. Holly Have meanwhile feels nothing in her heart but the need to criticize her friends. I don’t know if this comic’s going o end up having a body count but if it does I hope she’s the first to go.

These three cool teens find the Tsum Tsums crate and open it, releasing the adorable alien monsters within. This causes Dunk’s brain to break so hard that he forgets fam isn’t an adjective. 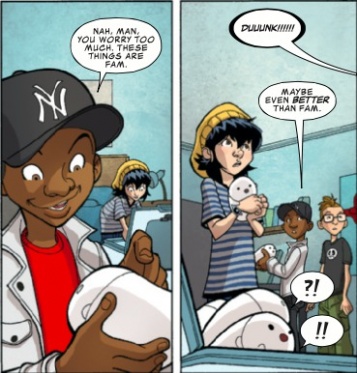 “Get your parents to buy you tsum Tsum Tsums, children! They’re mad succ!”

After Dunk consults Urban Dictionary to butcher some more words, the Tsum Tsums get loose and the kids have to get them back in the crate. It’s honestly a well-drawn chase sequence, with the kids chasing the little suckers though the entire layout of the apartment building. Even though these kids are definitely one degree away from staring into the camera and pleading with you to buy their bad Funko Pop dolls, the world of “Marvel Tsum Tsums” #1 feels incredibly vibrant and alive. Hell, the writing’s even It’s only when everyone has to stand and marvel at how LIFE CHANGING these gross doll things are that you remember you paid four dollars to be told what else to spend money on.

Final Verdict: 3.2 – “Marvel Tsum Tsum” #1 doesn’t always feel like it was made for product placement but it’s hard to get that fact of of your head. There’s some really great simple stuff like the cockney space trucker and Bert going Mr. Robot on himself with his bad language. And like I said earlier, the art is goes beyond and above what you’d expect from the 2016 equivalent of a Hostess Cakes ad. But it’s hard to escape how that’s what this is. Three impressionable young kids marveling at whatever cool product is going to end up making them die early, just like Hostess Cakes. You’re a busy person, I’m a busy person, and we don’t need to buy comic books that just serve as advertisements for other products. Instead, you can buy comics like “Suicide Squad: Rebirth” which also came out yesterday.