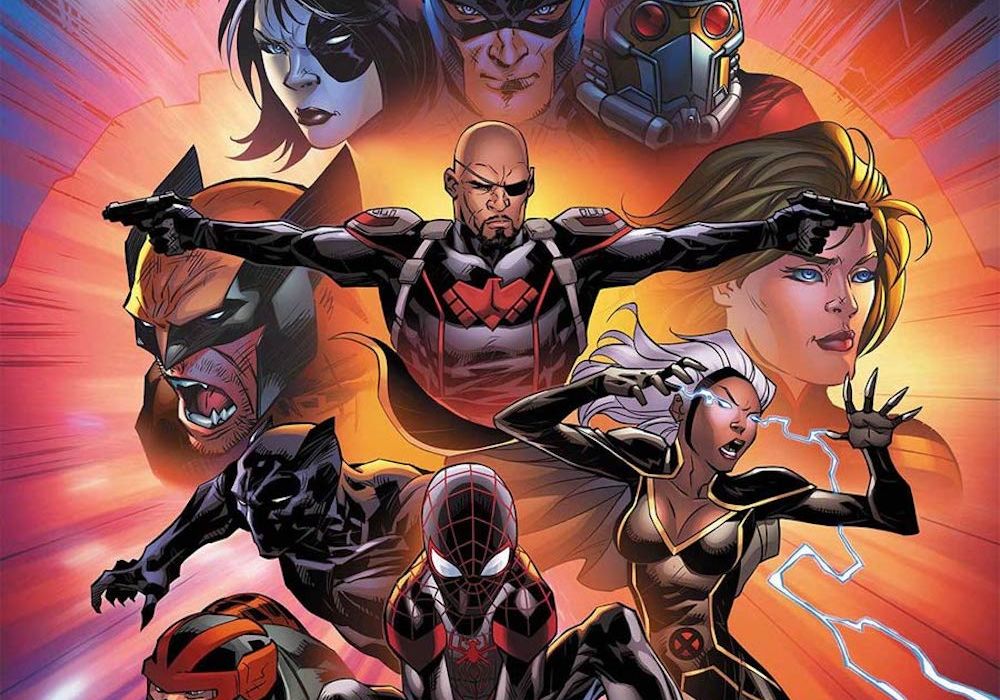 Many interpretations of classic Marvel characters coalesce under myriad creative teams from within and without what readers would expect in this adaptation of the eponymous podcast series! 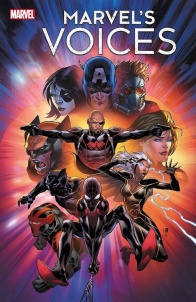 THE WORLD OUTSIDE YOUR WINDOW!

Marvel’s acclaimed podcast series focusing on telling the stories of diverse creators and their unique perspectives becomes a one shot of brand-new adventures! The X-Men find their place in the world after declaring a new nation! Killmonger strikes! Moon Girl and Devil Dino return!

With “Souls Afire,” Evan Narcisse tells a simple examination of Doctor Voodoo’s inner thoughts. There isn’t much really going on beyond a basic showcase of Voodoo’s skills, so the artwork by Jahnoy Lindsay, colored by Emilio Lopez, really steals the show. Out of the six panels, four of them are completely different, all filled with action. The pencils give a kind of focused intensity allowing readers to relatively easily follow the flow from one scene to another. On the other hand, different scenes have highly varied color choices, from warm, bright gold and blue tangling with sickly green to darker colors for a more mundane world.

“Race” features Vita Ayala’s look into a world-spanning car race between technological giants. This one-off tale gives a showing of Shuri, Forge, and Prodigy, though it perhaps makes Shuri far too insufferable to be seen sympathetically by readers. While that kind of impact may have been the point, the pride may be a bit overdone in making her closer to her film incarnation. On the other hand, Bernard Chang’s artwork is engrossingly dynamic, encompassing the chaos of the intercontinental competition rather well. Meanwhile, Marcelo Maiolo’s colors do a marvelous job of distinguishing one group from another, ranging from the highly colorful X-Men to the more ornate, yet simultaneously simplistic clothes of Shuri, both contrasted against more muted or colorful landscapes depending upon the specific locations of a given race segment.

With “Be No Evil,” Brian Stelfreeze creates a quick, fun bodyguarding job for Black Widow. The artistic style is soft and almost graceful, befitting the woman’s expertise as an assassin on top of everything else, and weaves its way seamlessly into the relatively gentle way she handles her young charge in the story, especially when contrasted against the carnage wreaked upon those who come to attack. In spite of the darkness of action in tone, the artwork and colors both help to soften the blows and make the entire thing more entertaining as a result.

In “A Diamond’s Worth,” Anthony Piper takes readers through an internal monologue by Emma Frost. His writing isn’t much to tell beyond it being a typical Emma Frost speech, but the artwork and color, especially the latter, makes the entire thing stand out. White, silver, and yellow all act in deliberate contrast against a black background with a spotlight of white shining down from above. The contrast truly draws out the intricacies of Piper’s artwork itself, making it easy to see the various facets of the figure he drew for the White Queen in much the same way as one would look at the imperfections in a diamond, as the parallel goes within the aforementioned monologue itself.

Luciano Vecchio’s “Assemble!” is a celebration of the LGBTQAI+ community that seems to take place during a pride parade. The overall effect of the writing helps to bring people together and inspire hope, while the thicker illustrations enhance the feeling of these characters being both larger than life and down to earth at the same time, relatable yet still people to aspire toward. Vecchio’s colors are rather vibrant, with the soft appearance of the backgrounds providing ample room for the individual people to stand out, each and every member of the cast having an excellent, brilliant showing of solidarity with the community itself.

James Monroe Iglehart’s “Inspiration” is probably the most interesting of all of the different stories told, providing a unique spin on the story of Spider-Man. Using a new, different point-of-view, Iglehart is able to dive into both the novel and the familiar, using some comedic moments peppered into unusual choices that could lead to a story of their own if given enough room and time to develop beyond the extant pages. Ray-Anthony Height and Nate Lovett create an art style that is at times haunting or exhilarating depending upon a given scene, all tied closely with Lopez’s colors with their differing tones ranging between horror, comedy, and overall realism in general while making use of light sources in the area.

Brandon Montclare makes for a very humorous scenario in “… A Friend in Need,” focused on Moon Girl and Devil Dinosaur. When coupled with the animated art style of Natacha Bustos and the lively colors provided by Tamra Bonvillain, everything comes together in a cohesive whole that feels like a comedic scene out of a cartoon, complete with the thought bubbles of a character’s imagination.

Kyle Baker’s “Perspective” is well-illustrated and colored, seeming like something out of a painting in a museum with its use of light and hues to make every emotion that much more potent. Unfortunately, Baker’s use of a physical handicap as a joke at the expense of the person who has it, let along the fact that said joke is the meaning behind the very title and is falsely equated with someone else’s superpower, is quite a hard pill to swallow.

Geoffrey Thorpe’s writing for “Top of the Key” seems interesting, but it relies heavily on prior knowledge that some readers may not have. Without said knowledge, it is difficult to understand, let alone care, about what is going on between the characters presented. Luckily, Khary Randolph’s artwork is crisp and precise enough to make the visual feast worth the effort, with Lopez’s color choices bringing a dual sense of realism and ethereality to the scene.

In “What a Wonderful World,” Rob Marksman takes up the Silver Surfer’s sadness beneath the surface of hope for humankind. Using a plethora of violent images in conjunction with Norrin Radd’s silent reactions amongst his internal thoughts, Damion Scott is able to show just what the Surfer is thinking even before it is abundantly clear in the final panels. Meanwhile, Dono Sánchez-Almara gives a visual feast with his effective use of color, especially in a single-panel battle with all of the dynamism Scott provides.

With “Death,” Method Man and Daniel Dominguez project a humanizing perspective for an earlier time in Wolverine’s life, showcasing both his moral code and his tragically unending life. Alitha E. Martinez’s artwork emphasizes the emotional distress, especially as it contrasts against the unfeeling gaze of Lady Death herself. Lopez uses the style as well as a darker palette to emphasize a hopeless tone and an air of tragedy.

Charlemagne Tha God and Chris Miles’s “Christmas Blues” pulls together a meta-fictional tale about Blue Marvel that blurs, or even breaks, the fourth wall of the observer altogether. While comedic, such an effect also can break the suspension of disbelief given its prominence. However, J.J. Kirby’s artwork, with the emphasis on thicker jawlines and musculature, shows that perhaps the break is intentional and should be seen as just a joke, even with the style itself being perhaps a little too exaggerated around Blue Marvel’s face, especially when using colors to emphasize a light shining from below to an unintentionally almost sinister glint.

Roxane Gay’s “Punishment” acts as simple wish fulfillment, and is entertaining in its own right regardless of how legal She-Hulk’s actions may be. The fun elements of the story are clearer with Brittney L. Williams’s animated artwork and Rachelle Rosenberg’s well-constructed color palette able to emphasize different elements of She-Hulk’s life in different palettes, from dark blue in the night to brighter and more varied colors during the day.

David F. Walker and Chuck Brown craft an interesting story about Wolverine in “Back to Madripoor,” though perhaps at the expense of another character altogether. The violence of Wolverine is not tempered at all by time, and barely by Krakoan laws, so Sanford Greene is given freedom to emphasize the sheer violence and feral nature of the protagonist and his foe both in the throes of combat. Meanwhile, Matt Herms uses a subdued palette with warm colors or cool ones depending upon what will make the scene seem less “cartoonish” or joyful, keeping emphasis on the visceral fight itself.

Final Verdict: 7.75– There may be some odd characterizations along the way, but amongst fourteen different stories, “Marvel’s Voices” #1 keeps true to one thing above all else: fun.