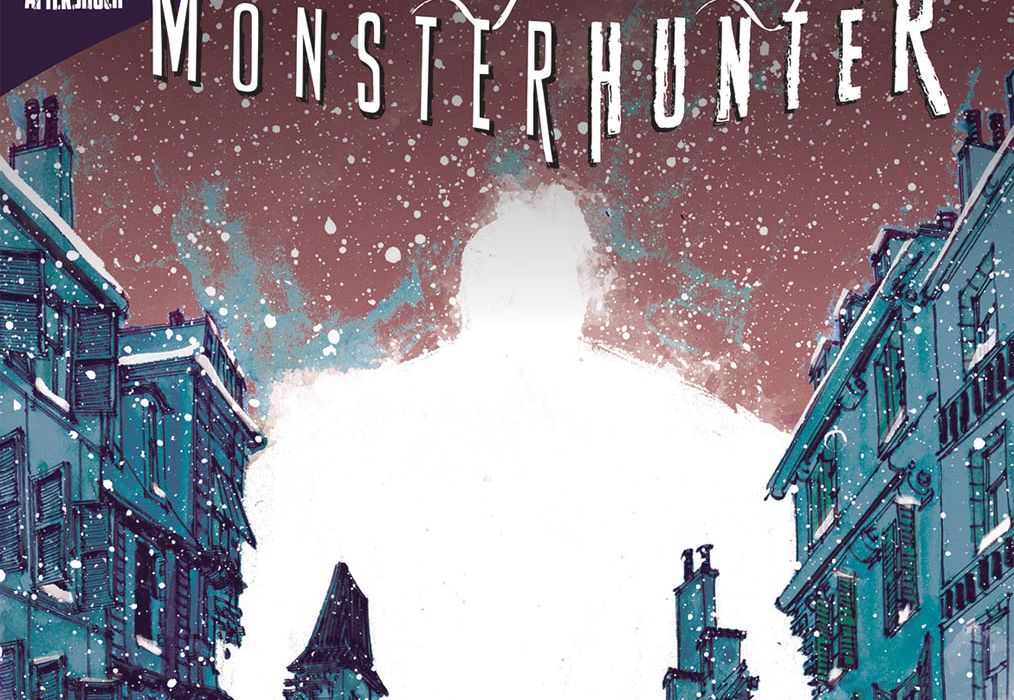 Abraham Lincoln: Vampire Hunter. Pride and Prejudice and Zombies. Sense and Sensibility and Sea Monsters. There’s an obvious formula for historical horror fiction, and AfterShock Comics is here to cash in on the trend with “Mary Shelley: Monster Hunter.” The new title re-imagines Frankenstein as a work of non-fiction in a horror-filled period piece that feels surprisingly modern, combining mystery, terror and the promise of one of literature’s favorite monsters with contemporary colors and plot elements. 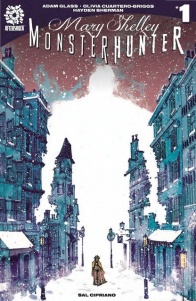 For nearly two centuries, scholars have wondered how on earth Mary Shelley, a nineteen-year-old girl, was able to conjure one of the most frightening and enduring horror stories of all-time: Frankenstein.

But with the recent discovery of Mary Shelley’s secret memoir, the truth is finally revealed: Mary Shelley didn’t just write Frankenstein, she lived it. Traveling back to that historic Geneva winter of 1816, Mary, her fiancé Percy, sisters Claire and Fanny, and the celebrated poet Lord Byron, find themselves guests of the eerie Frankenstein Estate. The macabre and frightening events that follow lead Mary to both a gruesome and shocking discovery. Their mysterious host is not at all what they expected, and their intentions will change the course of Mary’s life forever.

Brought to life by Adam Glass (ROUGH RIDERS, THE NORMALS, THE LOLLIPOP KIDS) and Olivia Cuartero-Briggs (E TV’s The Arrangement) with art by Hayden Sherman (COLD WAR, The Few, Wasted Space), Mary Shelley: Monster Hunter is historical fiction at its most (After)shocking!

It’s no secret that more and more comic books are being optioned for film and TV. And, it stands to reason, a comic book publisher wouldn’t mind the profits or the PR boost gained by one of their own series getting that treatment. So, it makes sense why a TV writer/producer duo would be the ones to pen a series destined for the screen. Adam Glass has experience writing and producing the TV series, Supernatural, as well as writing for comic and, while Olivia Cuartero-Briggs has no comics experience, she brings her own playwriting and screenwriting experience to “Mary Shelley: Monster Hunter.”

No stranger to how good stories work, Glass & Cuartero-Briggs set the hook: a woman in present-day happens upon a hidden manuscript by Mary Shelley, alleging that her Frankenstein story was no work of fiction. The rest of “Mary Shelley: Monster Hunter” #1 plays out in 1815 but like a classic horror film. Mary, her soon-to-be husband, Percy, Lord Byron, and others, desperate for a place to stay until winter passes, accept the invitation to stay at the home of Doctor Frankenstein. Things get weird. The gang, rather than trusting their collective gut, decide to stay since winter is cruel and they have nowhere else they can go. It’s a tried-and-true horror formula mixed with a little history for a cocktail that goes down easily.

But if “Mary Shelley: Monster Hunter” is a cocktail, then Hayden Sherman’s art is the torch that lights it aflame. His unique illustration style, with its thin lines and tiny details, allows him to fit many elements into each panel. It also gives a wild, uncontrolled tone to the story, an electric undercurrent beneath the reserved Regency era manners and attire. Matching that rigid Regency air is Sherman’s panel layout, which plays like a song, individual, self-contained panels building up to borderless ones which extend to the page bleed. The art from one panel never extends into another. It will be interesting to see if the style changes to become more unhinged as the story heads further into the inevitable madness ahead of Mary Shelley and her friends.

Perhaps the most stylish aspect of “Mary Shelley: Monster Hunter” is Hayden Sherman’s color palette. Changing by the page, it’s partially informed by the scene’s venue and the time of day, just like one would expect. But more than location, Sherman washes each page in the scene’s mood, the way film often uses color filters to convey tone. Sherman gives each scene its own limited color palette, with the majority of the colors feeling subdued and one accent color that stands apart from all the rest, drawing the eye to each page’s focal point. That accent color looks shockingly neon against the others in the palette, an anachronism that contrasts with the more reserved or historic elements portrayed in the line art.

Responsible for both the line art and the color work, Hayden Sherman is able to rely on his own color application rather than line work to give the scene texture. It keeps the panels from feeling overwrought while still portraying a decaying apartment building, the history in the walls of a castle, or the dramatic light shining through a window.

Sherman’s line art and color create an aesthetic unique to “Mary Shelley: Monster Hunter,” making it distinct from other books. Sal Cipriano’s lettering takes it one step further with slick caption copy in the modern day scenes set flush against the angled building, captions with drop-shadows for the 1800s narrative, and borderless balloons that stand stark against the art for a clean, premium feel. The sound effects, too, are borderless but are only used when relevant to the plot. That “bump” in the night is more Chekov’s gun than scene texture.

All of these elements work together for a singular style you can easily imagine translated to the screen, sharpening the edges of a fairly unoriginal concept and polishing it for producers hungry for intellectual property with potential. It’s an easy sell, one would think, reading through this first issue of “Mary Shelley: Monster Hunter.” It has all the hallmarks of a horror film: young, attractive, well-off friends trapped in a house of horrors. A psychopath lurking somewhere inside. The promise of a classic monster and a protagonist who must hunt it to survive.

Maybe that’s enough. Concepts are revisited for a reason. Especially in the horror genre, success isn’t always gauged (nor guaranteed) by trailblazing. And though “Mary Shelley: Monster Hunter” #1 builds up to a reveal that falls fairly flat and offers plot building in place of character development, it’s only the first issue. It’s still early, and there’s a lot of setups to do for the story – we can’t expect a single issue, much less the first issue, to do it all.

“Mary Shelley: Monster Hunter” has an appeal all its own, from the intriguing mysteries it sets up to the familiar concept and characters pulled from real life, and its characteristic aesthetic that balances modern elements with more traditional ones. One could see why it will likely be optioned for the screen.

Final Verdict: 7.0 – It may not be for everyone, but Sherman and Cipriano shine in what promises to be a fun series for fans of historical horror fiction.