The idea of Marvel bringing Shang-Chi back to comics is a welcomed change of heart for the publisher who has been trying to find a new angle for the character to launch an ongoing series off of. Everytime Chi is welcomed back into the fold, I can’t help but hope talent will find a way to go past a stereotype and integrate some fascinating characteristics into the hero’s life to be worthy of the series’ original publication history with creators like Doug Moench, Paul Gulacy and Mike Zeck’s contribution to the work.

With so many different creators bringing fascinating work to the hero over the years and the idea Marvel has hired talent like CM Punk and Dalibor Talajic to the mix, this could be a breakout period for the character and property able to strengthen and enrich the publishing slate. 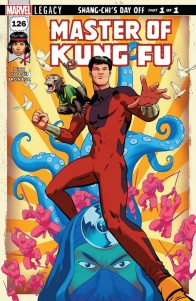 The Marvel Universe is full of fighters: brawlers, scrappers, weapons experts, mystical kung-fu virtuosi. But there’s only one martial artist skilled enough to be called the greatest. SHANG-CHI has been a pinch hitter for a long time, stepping in for Avengers missions when no one else would do, but when no one can match your speed or skill, sometimes it’s best to work alone. To see what you’ve been missing if you don’t know Shang-Chi, don’t miss MASTER OF KUNG FU!

Writers have approached and interpreted Shang-Chi’s background in a couple different, fascinating manners, but I never expected to receive a purely humorous take on the character in the new series. CM Punk and Dalibor Talajic have a script brimming with levity and humor, but channeling a couple of stereotypes and ideas are best left to previous stories published years ago. Shang-Chi’s ho-hum, silly personality doesn’t quite sit right with me and the surface level, nice guy that knows karate angle lacks the depth modern comics require. Punk doesn’t approach the character or material with the nuance needed to really cement an interesting character archetype here. Giving the hero a talking monkey addicted to ice cream is cute but doesn’t scrape past the surface or properly indicate what this property has to offer.

While this story is full of groan-inducing aspects such as obvious stereotypes, there is still a charm and energy potent throughout the story that still makes this comic an entertaining read. Lots of the jokes fall short of missing the mark and seem a bit too straightforward, but the conversational and pleasant nature of the story is something to be admired. Had this title been more straightforward and less of a comedy series with a stronger plot which integrated some seriousness, the approach could have crafted a really nice book. The book starts off grounded in reality and continues to descend into more craziness until the story throws an octopus into the mix. The bombastic nature of an octopus and a monkey both occupying the space of one comic book is worth congratulating but divorced from any sense of reality.

Dalibor Talajic has matured as a comic book artist over the past couple years. Talajic’s more refined and simplistic take on this title is another aspect of the book which is just a treat to look at. Shockingly enough, the artist actually lends a couple of more vivid characteristics to Shang-Chi that make him more prominently defined than what other artists have offered to the character. Talajic draws expressive figures emoting here throughout masks and elaborate costumes. There’s something to be said about how the art matches the impressive energy and vigor from the script to deliver something worthy of the prose in the book.

There are definitely strong ideas and silly moments in this story, but the amount of sheer text on the page is just daunting. I found myself wanting to skip over speech balloons with dialogue riddled with bad jokes. Punk definitely has all the foundations of a story worth reading, but there are problems with the execution of the book. The attitude and artwork of the series are definitely going to interest some fans and may be enough to draw older readers in. The story does not, however, carry a prominent connection to the older series which took the source material more seriously.

The grimmest aspect of the work is that Marvel obviously has untapped potential with Shang-Chi. The publisher has tried again and again to revitalize the hero and find just the right execution. Unfortunately, Punk’s happy-go-lucky, wordy take on the property has its head in the right place but doesn’t capitalize on everything that the book has to offer and ends up being slightly offensive at the end of the day. While Talajic’s pencils are a joy, Marvel still has a long way to go before proving this era of Shang-Chi is worthy of a long-lasting ongoing series!

Final Verdict: 5.5 – “Master of Kung Fu” #126 is a cute, slightly problematic take on Shang-Chi wrapped up in magnificent artwork.