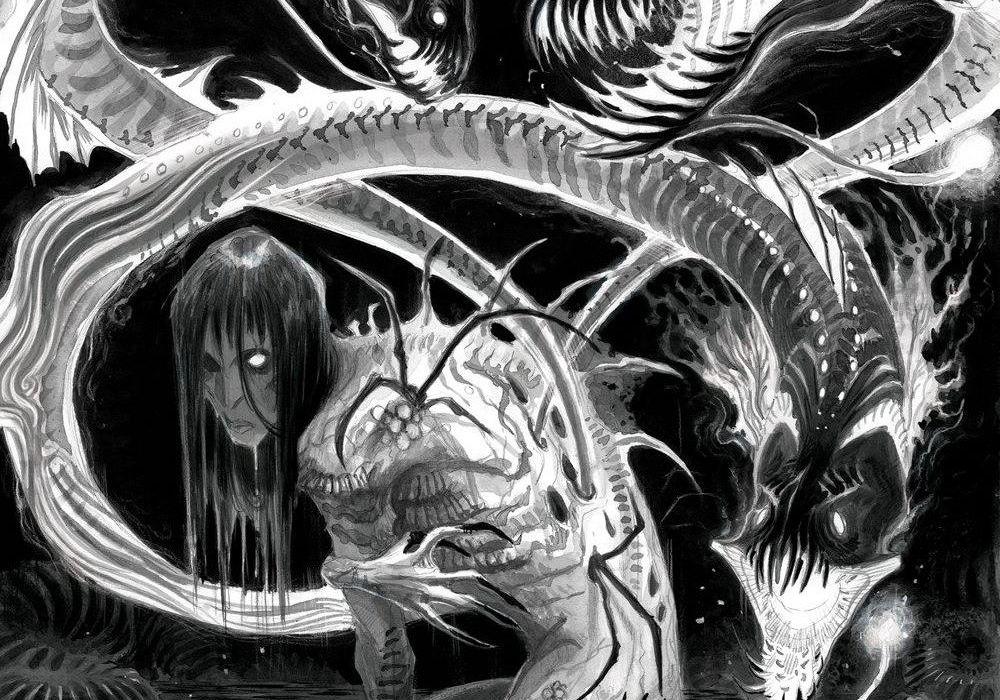 A trip to a secluded women’s commune quickly takes a turn in the worst possible way. TW: While this review does not go into the details, this issue does deal with the subject of rape and rape survivors. 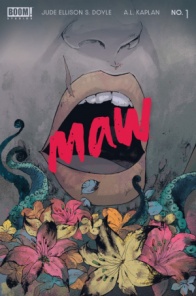 Traveling through an island off the coast of Virginia, Wendy, accompanied by her sister Marion, is on her way to find, and possibly join a secretive commune hidden in one of the island’s valleys. The pair have very different views on groups like this, how and why they exist, and what they mean for womanhood on a grander scale. It’s easy to say that Wendy is an optimistic feminist, while Marion is the pessimist who might wish things were better, but knows they really aren’t. Wendy, fair-haired and bright-eyed, and Marion, who see with sunken eyes through her black, wavy bangs are exactly the on-the-nose physical representations of their characteristics. Within the confines of this folk horror story the obvious choice to have the two main characters look this way can be forgiven, as long as the quality holds up the weight of the story that is being attempted.

There are a lot of ideas and themes at play just within this first issue. It takes a look at feminism from multiple view points as well as rape, and rape culture on both a personal and grand, governmental scale. When it comes to stories like this it is easy to feel that there is a necessary importance and weight that must be brought forth when telling it. Telling a fictional story with social importance should never be done without some entertainment and a gateway for readers. This can be both a burden and a positive facility to get work like this out into the world. But once it is out and getting absorbed by readers, how you have achieved and managed the balancing act of creating something both powerful and worthwhile quickly becomes evident. It can be the most difficult thing about writing a story like this, making it the thing you need it to be, while hoping it doesn’t immediately get lost in the noise, or worse, widely condemned for its subject matter.

“Maw” is walking a line of telling its story through subtle, quiet scenes, and heavy handed actions. For now, the story is mostly working for me, but as it continues to expand, the thread that is taking the most clear or plain route could fall apart. It seems to be the one tied most directly to the horror element so that should work in its favor to keep readers engaged without being completely taken over by melancholy thoughts. Jude Ellison Sady Doyle’s (“Trainwreck: The Women We Love to Hate, Mock and Fear…And Why”), script is trim and quickly paced. They make their points clear and direct without beating you over the head. It’s easy to see that this is both a fun horror story, and a true passion project for Doyle. The direction Marion’s story is taking does begin to feel a bit on the nose, but it does feel right for this comic. As a greater threat begins to get hinted at, it could make for the most interesting detail in the series. It allows for a lot of speculation while awaiting the next issue.

It is second nature to suspect the secluded commune or religious sect of being the villains of the piece due to decades of stories both within films and books that give us just those villains, but also from real life, where we have seen corruption and evil within both major religions and cults. It is also a societal norm to assume anyone living within a commune is a “wacko.” With the resurgence and re-examination of folk horror in recent years, most notably due to Ari Aster’s 2019 film Midsommar, it is easy to believe that the feminist commune in “Maw” would be a similar group. A cult that will take you in when you need them most, only to have their dark intentions surface at a later time. So far Doyle’s writing keeps those assumptions at bay, neither confirming nor denying that the call is coming from within the house. However, they make it clear that there are very real threats just outside this safety zone that these self-proclaimed feminists have set up for themselves. This threat does feel like it could be a simple act of dark fate, but it could very well be done to make a point. The entire first issue is full of dread and angst, begging to keep its secrets while letting you in on the most minute details. This is done through Doyle’s writing and artist A.L. Kaplan’s (“Full Spectrum Therapy”) beautifully structured illustrations.

Kaplan’s work is both open and clear, as well as closed off, choppy, and pushed away when it needs to be. Like the writing it needs to give us enough plot and character details to keep us engaged and moving forward, while playing things close to stave off all secrets from being revealed before their time. Kaplan’s characters are varied enough to keep each person we see their own look, but still have a uniform design throughout to match the world he’s creating. Aside from their designs matching their personalities, it is cool when Kaplan shows Wendy and Marion in a front-facing view. They are very much two sides of the same coin. He gives them similar facial features while keeping them as their own people. This is something rarely done in comics. Siblings either end up being twins, or simply don’t look alike at all. He keeps these sisters connected through wide set eyes and their jawline. They look like real people, leaning towards conventionally attractive without them falling into comic book archetypes for women. Which would be a rough look for a feminist book of this nature. The only woman we get a good look at who even comes close to being overtly beautiful is Miranda, the woman running the commune. She seems to be one of the younger people there, and she has a glow about her. Again, she could exist in the real world, but there is something about her that feels like it could have a secret power behind it. Why are these women flocking to her specifically?

When the art needs to pull back or keep things in the shadows, it does so without sacrificing its quality or finer details. The blacks become blacker, enveloping the edges, while still giving us plenty to mull over. Panels and pages pertaining to group exercises and even the more awful plot points give us detailed thumbnail images, telling us where to look and what to look at. The artwork itself, and the panel layout is reminiscent of the works of Mike Mignola and Andrea Sorrentino. There is a stony and gruff detailing to a lot these moments. It’s gorgeous, but unearthly. Incredible all around.

The color work by Fabiana Mascolo, with assitance from Federica Mascolo is beautiful, and throughout most of the issue, simple without being simplistic. The palette is bright colorful, while keeping everything muted to a point. The works completes the piece without overpowering a single page of panel. Shadows and lines set the mood. The inky blacks make up just as much of the horror as the script.

“Maw” is a haunting tale, riddled with anxiety and trauma. It deftly and openly deals with sexual assault and the institutions that allowed for it to happen, continue to let it happen, and claim to want to help. It speaks to the real people reading it while remaining within the parameters of a horror story. You will feel sad, you will feel angry, you will want to stay with these characters, and hope they come out the other side of this the best they can.

Final Verdict: 8.5, A strong start filled with pain, hope, and a lot of questions.