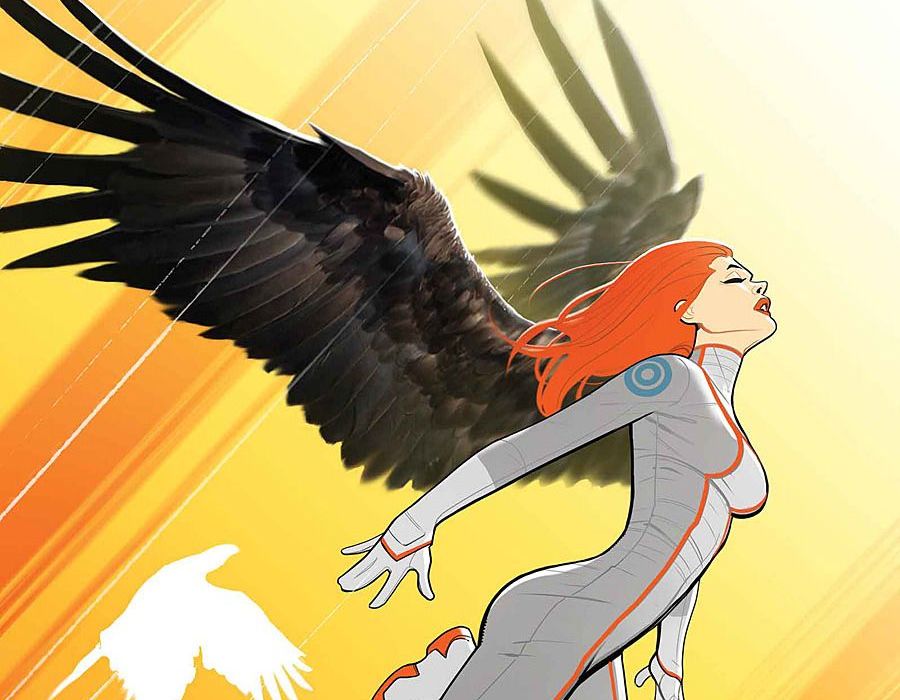 Maximum Ride is a book series that’s been going on in some form or another since 2005. With “The Final Flight,” Marvel’s comic adaptation of the series seems to be coming to a close. What can new readers, as well as those who’ve read the books before expect from this mini-series? Let’s find out. Spoilers ahead!

• THE FLOCK is tired of running. They’re ready to take the fight directly to JEB and the ERASERS!
• But things get complicated when the line between friend and enemy is blurred.
• And all the while, MAXIMUM RIDE keeps hearing that voice in her head – the voice that says she’s destined to save the world!

I opted to review “Maximum Ride” for a couple reasons. First off, I read the Maximum Ride books by James Patterson all the time when I was in middle school so I’m just interested to see how they’ve evolved. Considering that flying werewolves were a huge part of the narrative, Maximum Ride always seemed like it was made for comics. Second, comic adaptations/sequels (this is closer to a “Buffy Season 10” project than a straight up re-telling) interest me in general. Third and finally, Maximum Ride in general is insane with a capital flying werewolf.

Maximum Ride is the name of this whole series’s main character, a young teenage girl who’s the leader of The Flock, a group of kids with wings on the run from the evil government conspiracy that raised them. Apparently the government really wants to get those kids backs even though they have flying werewolves on their side and The Flock has Gazzy the Gasman, a young kid who farts all the time. Over the course of the original books, The Flock tries to uncover their past while a mysterious voice in Max’s head keeps giving her advice and warnings about an impending apocalypse. A quick survey of Wikipediashows that the books actually wrapped up in 2012 which means “Final Flight” takes place sometime before the actual Maximum Ride story ends.

“Final Flight” finds The Flock discovering that the organization behind all the monsters and government spooks that have been hunting them down since birth have actually done some in-house cleaning and exterminated the monsters they engineered to take down these birdboys. This allows everyone to let down their hair a bit, allowing Max and her boyfriend Fang, who only plays as Reaper in Overwatch, to go be angsty about their love.

If you’re going into “Final Flight” for the flying werewolf action (why wouldn’t you) you might be a little dissapointed in how little action this first issue has. Aside from some flashbacks of the bad guys slaughtering their own soldiers, there’s not a whole lot of conflict in this issue. The Flock gets kidnapped by robot werewolves (NOT THE SAME THING) but that whole conflict is mostly off-screen. And Max’s journey with Fang takes her to her biological mom’s house to have a chip taken out of her arm, only for her to lose all nerve control of her arm. There’s a good chance I’m being clouded by nostalgia right now, but I just remembered the Patterson novels having this fast paced sense of the characters always being on the run I’m just not feeling in this comic. Yeah, they get kidnapped by werewolf robots and stuff but it’s kind of just this thing that happens rather than a big life-changing event, as flying werewolf robots kidnapping your family should be.

Art-wise, I’m still not too keen on “Final Flight” just because it feels very static. I can’t really feel much of a flow between panels and the way some characters have less detailed faces depending on how important they are to a scene just throw me off. Overall, there’s just a bland feeling to this book that doesn’t help sell any of the emotion or suspense which should feel present considering that flying werewolves are out to kill these teens with wings.

I really hate to keep riffing on the flying werewolves bit, but it’s a sign of one of the big faults in “Final Flight”. When a story has flying werewolves at its disposal, it shouldn’t be boring. At the very least, there should be some stakes as these kids fly around, try to figure out their background, and escape from flying werewolves. Instead, “Final Flight” stands around wondering if anything’s going to happen. It very well could in the upcoming issues, but there’s really not a lot to see here. If you’ve read the Maximum Ride books than you’re not really going to be missing out on anything here. If you’ve never even heard of Maximum Ride before this comic’s going to make you wonder how enough people are interested in it to warrant an upcoming movie. Overall, it’s not explicitly bad, just very underwhelming.