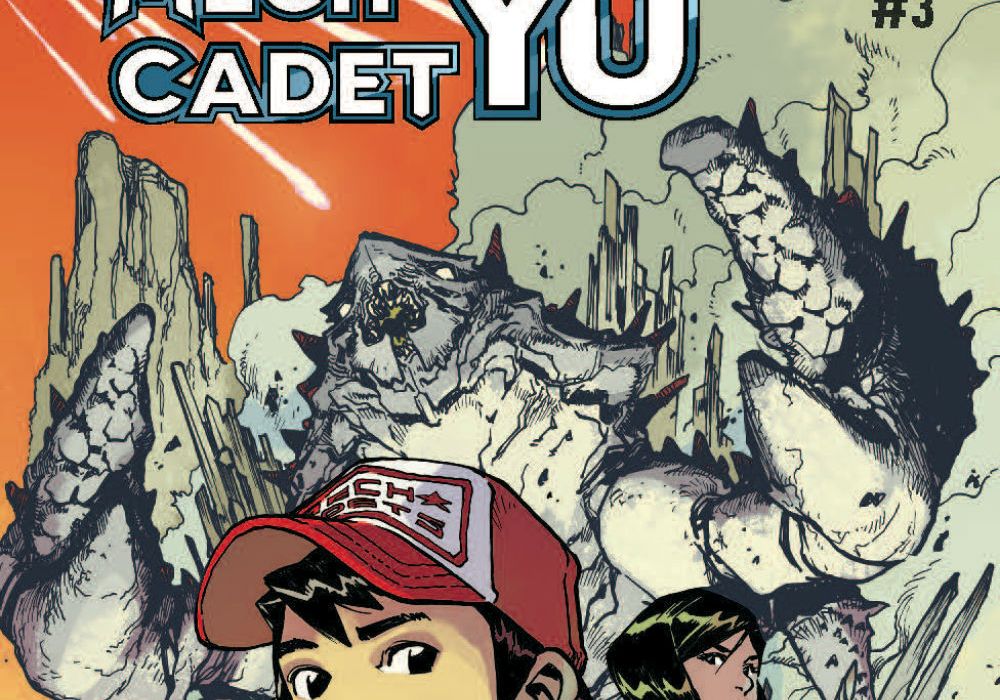 They could have easily called this one Mech Cadet Unity. Teamwork and what you can do to support the cause are the name of the game here. Of course, just because kids are blessed to be buddy-buddy with four-story, sentient battle robots doesn’t mean that prejudice, classism, and old-fashioned pubescent bad-blood won’t cloud the issue. 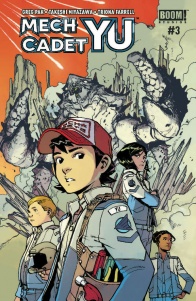 The cadets are undergoing their most intense training yet, when Park’s mech starts to malfunction with dangerous consequences.

Any sci-fi flight of fancy that threatens life-or-death stakes towards the children caught up in the adventure runs the risk of coming off disingenuous. Play up their innocence a bit too much amidst the fantastical, and the peril just never feels real. But “Mech Cadet Yu” #3 succeeds because the danger faced by Stanford and his fellow sky cadets is borne by cracks in the human condition more so than the ferocious clawing of the Sharg.

That being said, Greg Pak and Takeshi Miyazawa gives us our first glimpse of an enemy that was merely hinted at in their first two issues. And what an insidious foe they’ve created. Miyazawa’s design of these aliens reaches wide across the horizon with a crustacean-like exoskeleton that’s barely contained by the full splash page it’s sprawled across. In stark contrast to the sleek and contoured metal exterior to all the mechs we’ve been introduced to so far, the Sharg is rippled with horns and giant lobster-claws. Triona Farrell buries Miyazawa’s loose hatching and stippling of the alien’s ghastly and battle-worn shell with fuschia-purple swaths that are reminiscent of a fierce rash.

So while “Mech Cadet Yu” #3 builds towards this third act reveal of the story’s ultimate enemy, Pak and Miyazawa are crafting a tight morality tale to show that divisions between people would be the real menace in the face of such an adversary. While tensions have always been high between Stanford and Park, Pak pays special attention to their divide. When Stanford’s mother forces a meal into Stanford and the other cadets, Park is shown defiantly apart from the group – even though it’s implicit in Pak’s dialog that she’s more than welcome to sit down for a bowl of noodles too.

Later, when Stanford runs to lend a hand – and a welding torch – to help repair a mech that was busted up at the front, an incredulous Park chastises him for assisting people that are so far beneath the likes of a Sky Cadet. “You’re just gonna dive right in there and work with the scrubs? What’s your deal anyway? I mean, what’s you angle?”

“I dunno.” Stanford answers, innocent altruism painted on his face. “I mean… We’re all in this together, Aren’t we?”

“No. No we’re not,” she answers, walking away alone.

Miyazawa orients this specific panel at the bottom right of a page. And by drawing her walking diagonally out of the frame, there’s a subtle implication she might just be going to sulk in her metaphorical corner. While the existence of class division is explicit in the story – assignment to janitorial or construction duties is used as both an insult and a punishment – it’s just as possible that Park’s resentment of Stanford is rooted more in the fact that a mech chose him and not her. It’s very plausible that she’s hurt and lashing out in the language that’s been drilled into her with seeming military precision by her father.

Contrast this with the way Stanford speaks about his own. When Stanford eats dinner with his friends, he goes out of his way to tell the cadets that his father was a labourer, as he was and his mother is. But he says so without judgement, and maybe even with a small swelling of pride knowing that his father was doing his part. Pak may be telling a story extolling the virtues of teamwork, but “Mech Cadet Yu” #3 gives subtle nod towards the way in which family and experience shape one’s outlook on the world.

For all the excitement contained in this issue — and there’s quite a bit: Miyazawa’s dynamism in the mech training sequences is a flourish of jet blasts, speed lines and twisted metal — it’s the heart that makes it work so effectively. Miyazawa is a master at conveying facial expression with a few well-placed lines denoting eyes and eyebrows. At what he’s created in Stanford is a character with palpable joy and passion and compassion, even for one such as Park who’s showed him nothing but disdain.

There’s some deftly handled themes underpinning “Mech Cadet Yu” #3. And while class divides and personal prejudices are very much at the fore of Greg Pak and Takeshi Miyazawa’s work, they never forget to keep the story swinging with youthful enthusiasm. Some stories are just about astromechs and the kids who ride them into battle against hordes of lethal space lobsters. Sometimes, they can be about so much more. But whatever lens you’re viewing it through this time, “Mech Cadet Yu” #3 is nothing less than unabashedly fun.

Final Verdict: 8.0 – As the tensions rise and the Sharg hits the fan, “Mech Cadet Yu” keeps getting better and better.