Spawn and Witchblade are two of the oldest and more iconic sigils of the Image Comics house. Both have spawned fan favorite and acclaimed stories within their long tenures, and have branched into other mediums and genres. This comic is not the first time the two have crossed over, even as Neil Gaiman-created Medieval Spawn. Does this story warrant this clash of titans to come forth again? 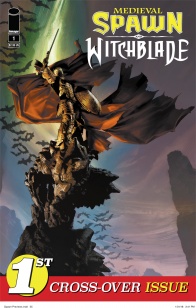 Fan favorites Spawn and Witchblade team together for the first time in TWO DECADES!! In this issue: A village is besieged by a dark force—then Spawn emerges from out of the shadows to save them all. Is he their savior…or their destroyer?

I want to start out with some positives. The first segment of the issue shows some promise. We’re thrown into a context-less human/supernatural forces battle, which feels like a good representative of grittier, grimy medieval Europe. The battlefield is earthy and ruined, the weather is horrible, and the soldiers themselves are unfit for battle, literally saying themselves “AN’ DALE IS TOO SICK. AN’ I’M TOO BLIND. YET HERE WE ARE.” We get a bit of this low level, pitiful fighting, and it’s somewhat endearing to see these pathetic soldiers genuinely try to fight for their cause. Good thing for them that ol’ Medieval Spawn shows up to save the day, in a wordless encounter that shows off his bravado and fierceness. It’s believable then that the populace is so accepting and welcoming to him as they had no shred of hope left for them otherwise, which lifts the readers spirits up with the folks residing in the story.

From here, everything seems to unravel. We find out that Spawn has no memory of his apparent regency among these folks, having him work as an uninteresting and not entirely compelling blank slate. There’s the sense of loyalty that drives him as a character, once he has a vague remembrance of his memory as a king, but every other action he takes is passive, with him passively accepting everything that the townsfolk tell him without much of a reaction. We also never learn anything substantial about the army that Spawn just fought back, save for the fact that they may or may not have come from when “THE DARKNESS BEGAN,” making the whole first scene feel insignificant and somewhat shallow. But the real icing on the cake is when we learn about the Spawn’s past. Haberlin and Holgin come up with a tale of Spawn as the good King Valon, who’s origin echoes the exact same story beats as those in the King Arthur myth, with his own personal Lancelot and Guinevere to boot. It’s the kind of shameless retelling that leaves a bad taste in readers, and doesn’t inspire a lot of confidence for the future of the character or story.

What’s more is that there’s none of the features or characteristics of either Spawn or Witchblade present enough to make this tough story fun. The extent we get of seeing Spawn do anything uniquely Spawn is when he disintegrates an oncoming arrow with necroplasm, and charging his blade with the stuff before taking a swipe. There’s none of the trademark deals-with-devils, there’s no mention of Malebolgia or the Violator or any other reference to the Hell which makes the Spawn mythos so charmingly metal. But the true crime here? For an issue touted as a crossover between Spawn and Witchblade, there’s not a whole lot of Witchblade. In fact, there is no in text reference to her, only a very vague display of a generically magical character who I presume is Witchblade, because there’s nothing else here that suggests her character exists in this era. It’s frustrating, it’s annoyingly vague, and it feels like a letdown, even when the cover only touts the former, overtly masculine undead hero. It leaves this story feeling not much more than a generic medieval fantasy, with nothing to propel it from the rest of its convoluted genre.

The real rollercoaster ride here is being witness to Brian Haberlin’s art. From what I can tell, and I’m no expert in this field so take my opinion with a grain of salt, the whole book looks like it was first constructed in CGI software, and then pencilled and inked over to look more like a comic book. I understand that this isn’t an uncommon practice as it does help with posing and realism. However, it feels blatantly noticeable here. It’s so obvious, to the point that every face looks like it was scaled up emotionally about ten times, with anatomy uncomfortably defying human expectation, and characters standing over environments like there’s a few layers separating them and the world they live in. In the townfolk/undead sword fight on pages four and five, characters appear glued to the panel borders, while a pleasant backdrop of snow forest exists on another dimension underneath them. In the second last sequence, where we are introduced to Kildare (my Witchblade suspect), she appears in a panel in a position that looks like she is suspended from a rope in mid-air, with her shoulder and limbs contorted in an unnatural position, and her face conveying great abdominal pain. Most of the panels in this book feature characters with unnatural compositions like this, which is tough to look at.

However, I will give credit where it is due, this unnatural aesthetic works well when rendering Spawn or the Darkness creatures. It’s perfectly tailored for Spawn, considering his outfit and bodily structure: Spawns (if I remember correctly) are composed of Necroplasm or some other McFarlane trademarked substance, meaning they aren’t made of flesh and bone. In that case, it makes sense that he doesn’t move as swiftly as a human would. Similarly, Medieval Spawn is clad in some serious armor, almost to the point of joint restriction, so it actually looks reasonable for Haberlin to pose him so stiff and awkwardly, when in mid-strike or addressing a crowd after disembarking his horse. Similarly, the Darkness creatures look angular and inhuman when shuffling towards the townsfolk, and the creatures described in the Valon origin retelling are frightening in their computer-generated perfection. It does make the world feel a little more original and interesting, which is more than I can say for the narrative counterpart.

Geirrod van Dyke might just be the most solid contributor in this team. Van Dyke cements the grimy, medieval realism I discussed early on with a beautiful soft palette of blues and muddy browns. This works well not only at conveying the dirty tone of the period, but it also works at making Spawn pop out as a focal point. From the moment we see him, Spawn’s cape is a striking shade of red, representing the hope that he’s inspiring in the surrounding townsfolk. However, there’s a few strange 3D-like brushes in the coloring that only work in certain situations. When conveying the necroplasm erupting from Spawn’s blade, it’s a mix of kinetic and oddly solid looking. When coloring the fire crackling in the storytelling scenes, it looks like it was pulled from an PS1 era game cutscene. When showing how Kildare heals nature with her magic, it looks like a fractal was resized and pasted on top of the page with little attempt to blend in. Dated coloring and effects methods like these are a hit or miss, and it looks like most of the book was the latter.

I won’t lie, I was excited for the potential that this book had, considering the legacy of the title characters. However, “Medieval Spawn/Witchblade” #1 turned out more of a train wreck than a success. With an uninspired, tired plot, missed potential with lore and characters, and horribly inconsistent art, the creative team haven’t gone to great lengths to show their talent here. This isn’t a crossover you need to look out for.

Final Score: 4.0 – A missed opportunity, “Medieval Spawn/Witchblade” #1 features dull plotting, poor character work, and uncomfortably CGI-looking artwork, all without even featuring one half of the crossover characters.