Today, Captain Marvel soars into theaters. This is truly a momentous occasion and I think we all know why. That’s right, everybody. It’s long overdue, but the Skrulls are finally making their big screen debut! It’s great to see the MCU give these fierce warriors their own film. It’s important for hatchlings to have positive role models and…wait, what? This movie is all about Carol Danvers and the Skrulls are the bad guys?! Just great, more Kree propaganda. It’s not even about Monica Rambeau! Ugh..at least “Meet The Skrulls” #1 has balanced Skrull representation. 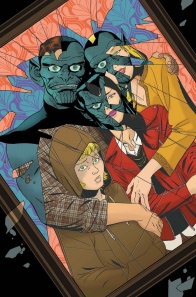 Written by Robbie Thompson
Illustrated by Niko Henrichon
Lettered by VC’s Travis Lanham
The Warners are your typical family. Dad works at Stark. Mom works in a senator’s office. Jennifer and Alice are students at Stamford High School. The only thing that makes them different is that they’re shape-shifting Skrulls and have infiltrated our society to pave the way for a Skrull invasion. Robbie Thompson (SPIDER-MAN/DEADPOOL) and Niko Henrichon (DOCTOR STRANGE, Pride of Baghdad) bring the Marvel Universe down to earth with a bold new look at the Skrulls that will test even YOUR loyalty.

“Meet The Skrulls” #1 opens with a mysterious figure stalking a seemingly normal family. In the park, he kills the parents without warning. Their child asks how the man found them and is instantly killed too.

On a field trip, Alice Warner is enjoying the butterfly exibit when she’s bullied by the popular girls. The young Skrull shape-shifts into a butterfly herself to get away and flies home. At dinner, it becomes apparent that Alice isn’t just disconnected from her peers but her family as well.

The Warner family is here on a mission to stop ‘Project Blossom’. It isn’t made totally clear what the project is, only that “there will be no place for us [Skrulls] to hide”. The entire family assumes their true Skrull forms at the dinner table and brief one another on their mission progress. Alice’s sister, Madison has made friends with the Queen Bee of the popular clique to gain access to plans hidden in the girl’s home. Her mother, Gloria, has blackmailed a Congresswoman onto a Special Projects Committee that deals with Project Blossom. Her father, Carl, works for a subcontractor that works for Tony Stark and is involved in the project.

The only one to make no mission progress is Alice. Her objective was actually to make friends with one of her bullies. The Warner family is angered by her lack of progress and use of powers outside the home and they have a heated exchange. Alice just isn’t as coldhearted as her kin or as focused on the mission and it baffles them. As Alice storms off, she reveals there was another Warner daughter, Ivy.

After dinner, Carl is called to meet his superior, Moloth. The Skrull Elders are very concerned about Alice. She grew up on Earth so she isn’t like them. Moloth stresses that she can’t jeopardize the mission. If Project Blossom succeeds they won’t be able to make Earth the new Skrull Throneworld. There’s too much at stake and they’ve already lost several Skrulls like Ivy and the family in the park from earlier. The issue ends with the mysterious man visiting the butterfly exhibit, apparently hot on the Warner family’s trail.

Okay, the ‘balanced Skrull representation’ thing was a joke but at the same time, I’m kind of serious. “Meet The Skrulls” #1 does a great job of treating the alien invaders as three-dimensional characters. That’s pretty rare. Off the top of my head, I can only think of Xavin from Runaways. Beyond that, the Skrulls are often one-note and regarded as if the entire species is evil. They are treated like absolute crap because of it too. In New Avengers, back around ‘Secret Invasion’, a Skrull infiltrated S.H.I.E.L.D. When discovered, she said she only wanted to live peacefully among the humans. They shot her in the head. Oh, remember that time Reed Richards turned Skrulls into cows?

Alice gets the most character development, all of it pretty interesting. In this issue, we see her grappling with her feelings of inadequacy, enforced by her peers and family. There’s also her desire to be her own person outside of the mission as well as a desire to fit in. She’s very relatable. I’m invested in her character and hope she makes it out of this mini-series okay. The rest of the family gets some development too. There’s a rift between Carl and Gloria because of elitism among the Skrulls. Madison may want to fit in too, though she isn’t as open about it as Alice. The entire family is hurting from the loss of Ivy.

The creative team decides to let that hurt go unspoken for the most part, making it clear to readers through the art. The happy family photos with Ivy contrast the tense family dynamic there is now. Madison stares at her sister’s empty room. The family glances sadly at the fifth place set at the table. It’s impressive how Niko Henrichon’s art clearly conveys their pain and helps humanize these aliens. Carl is scheming to help take over the Earth but you feel bad seeing him clutch his daughter’s photo and sit in her room.

The art is strong when it comes to horror too. The devious Madison has horns and beady black eyes to match her evil grin. The pictures of the Johnson family are unsettling…that whole opening sequence is unsettling actually. Niko Henrichon makes sure readers see the absolute fear in the little boy’s eyes right before he’s killed.

“Meet The Skrulls” #1 is a very good opening issue to this mini-series. It does exactly what it’s supposed to do. The issue introduces intriguing characters, sets up the plot and gets readers hooked and ready to see more. It will be really interesting to see the journey of these unique characters.