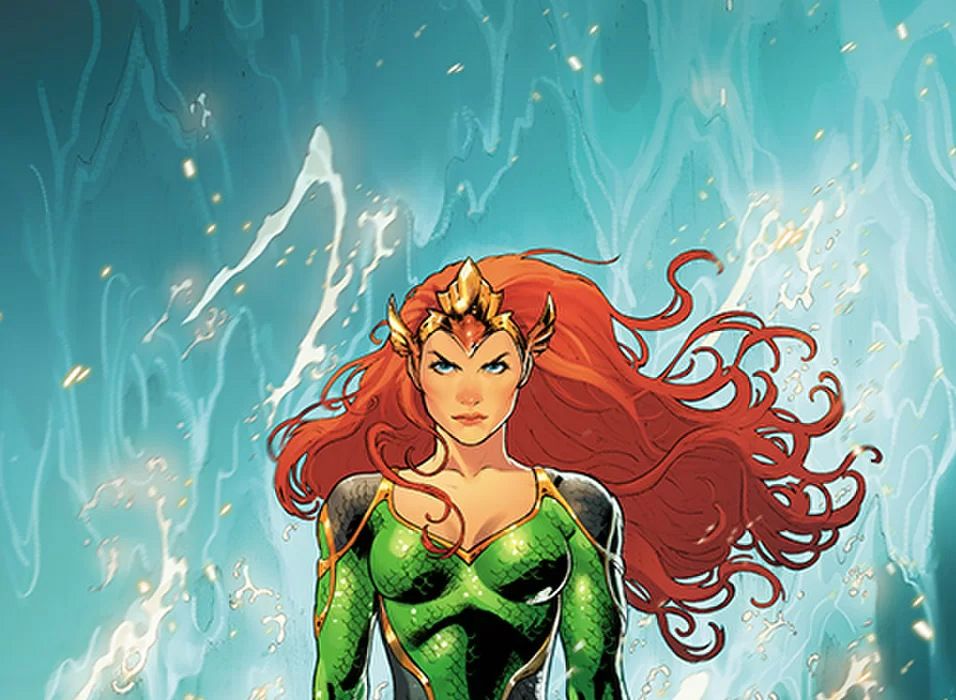 For me, Mera has always stood as the powerful matriarchal figure of the “Aquaman” series. It just makes sense that she deserves a solo series, with her crazy water bending powers and go-getting attitude. So I was glad to see that Dan Abnett chose to expand his on his “Aquaman” stories by writing this mini. But does it do the queen justice? 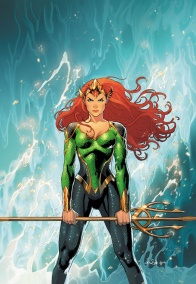 From the pages of AQUAMAN comes a brand-new adventure starring Mera, in her own title for the first time ever!

As the brutal Atlantean Civil War rages, Mera must keep the peace between the surface world and Atlantis as its newly anointed queen in exile. But when Aquaman’s brother Orm, a.k.a. Ocean Master, learns of his homeland’s fate, he’ll stop at nothing to return to Atlantis as its king and savior!

What immediately strikes me as great with this story is that it does work stand alone, but it feels important and substantial as it builds from plot threads in Abnett’s “Aquaman” run. Having Mera as an exile right from the start gives the series a sense of purpose and a finish point to drive to – either acceptance with her people, or even better, being anointed as queen. I’ll admit that I’m not a huge fan of the broken powers trope that Abnett uses here, however. I like that it adds more stakes to the fights, for instance, a fight with the Eel with Mera at full power, as Abnett writes, could’ve been finished in seconds. But I feel like it’s an overused trope and something of a crutch for writers to build up characters back to status quo. It’s interesting seeing her desperate and not withholding anything, but I feel that something else could’ve been used in place of this plot device.

I will say this however, that Abnett finds a good pacing between the action, political, and origin-retelling elements of the story. Everything flows nicely scene-to-scene, and has a nice circular feel to it with the Orm/Ocean Master story bookending the tale. Abnett ensures that we get enough time spent with each scene for us to fully understand, but what I find particularly well-executed is how Abnett peppers the slower moving political and relations scenes with action-based flashbacks so that the pace never truly lets up. It’s a good way to subtly retell Mera’s origin to newer readers without clogging the issue with a dedicated origin scene, and helps to break up the dialogue and text. I personally love the Washington D.C. scene for how it uses this, flowing between the present and key moments in Mera’s life to inform readers and support what she is telling the Secretary of State.

What I’m a little confused by is the amount of old-school narration that Abnett utilizes in this. It’s the return of the obnoxious, Stan Lee-esque omniscient narrator that unnecessarily describes what’s happening in scenes to you, and I have no idea as to why it was included. For me, it bogs down a scene and distracts from what’s happening in the art. In Mera’s battle with the Eel, there’s a scene in which Mera slams the villain quite heavily into an underwater timber, which would have been visually impressive on its own, but Abnett requires you to also read “…HOW HARD THE EEL’S HEAD MEETS THE VERY HEAVY TIMBERS OF THE AMNESTY BAY LOADING DOCK” just in case it was immediately obvious to you.

The art across the board fits in with what seems to be something of an “Aquaman” house style of lush cinematic realism and swirling, freefalling pencilling. Lan Medina fits in well here, at first by rendering an intimate and meaningful scene with the redeemed Orm and his adopted family, before breaking into a smoothly choreographed fight-scene with the Eel. The sequential element is fast and frenetic, with each panel easily directing the reader’s eyes as one character will toss another to the other side of the page or following a swim chase even interrupted by a flashback very smoothly. But underneath it all I find Medina adds a nice touch in bringing the homeliness of Amnesty Bay to life, and how the calamity of Mera’s fight interrupts the peace. It almost adds an underlying subtext of how civilian life is so easily affected by superhuman brawls, one that might not have been explicitly stated in the text but is evident by how Medina pencils the masses running in fear at Mera and the Eel going to town on the wharf.

Richard Friend supplies the inking here, and does a great job at providing the aforementioned smooth, liquid feel of the art. In the first Orm scene, there’s a great collection of moments which turns from heartfelt to sinister. Friend achieves this by holding back on the shading while Orm is with his family, but when Orm is alone and sees the news about Atlantis on TV, Friend doubles down on the inky shadows on his face to great effect. I feel also that the Mera and Eel fight wouldn’t feel so free-spirited and motion driven if not for Friend’s supple use of inks. It gives a fluidity to Medina’s pencilling that could’ve felt static without it, like Mera being tossed into the ocean with the Eel moving with… well, an eel-like grace thanks to Friend’s smooth underwater texturing. I also find it clever that whenever a flashback occurs, Friend uses lighter and sketchier inks to convey this ethereal feel, which conveys the scene well without relying on narrative.

In any given “Aquaman” themed book, Colors are important especially considering the bright and vivid underwater scenery that usually occupies the space, and colorist Vero Gandini does a great job with this in consideration. Mera herself gleams like a beacon every time she appears, as it should rightfully be. Gandini uses a mix of turquoise, green and gold highlights for her new royal armour, which focalises the reader to her in every important scene. I especially love the juxtaposition of her palette in the Washington D.C. scene, where Mera looks considerably out of place in the stock standard Washington office of brown and greys. The rest of the coloring is serviceable and pretty by the numbers, with Gandini adopting a nice digital painterly style to up the cinematic aspect of the book, but I did find a pleasant, late afternoon glow that made the Amnesty Bay scenes really pop from the page.

I’m glad to see how Abnett is expanding both on Mera’s character and the “Aquaman” mythos as a whole with this mini-series. There are a few questionable plot decisions and annoyingly omniscient third-person narration at times, but Abnett manages to keep the pace fluid with great storytelling techniques. The art team is suitably lush and dream-like as expected of a book of this genre, and manages to hold up it’s end of the creative team arguably more than the writing. Regardless, I’m very intrigued to see where this series goes.

Final Score: 7.0 – Held back by some dated plot devices and narration, “Mera: Queen Of Atlantis” #1 still manages to launch a well-paced solo series for the character with beautiful art direction.