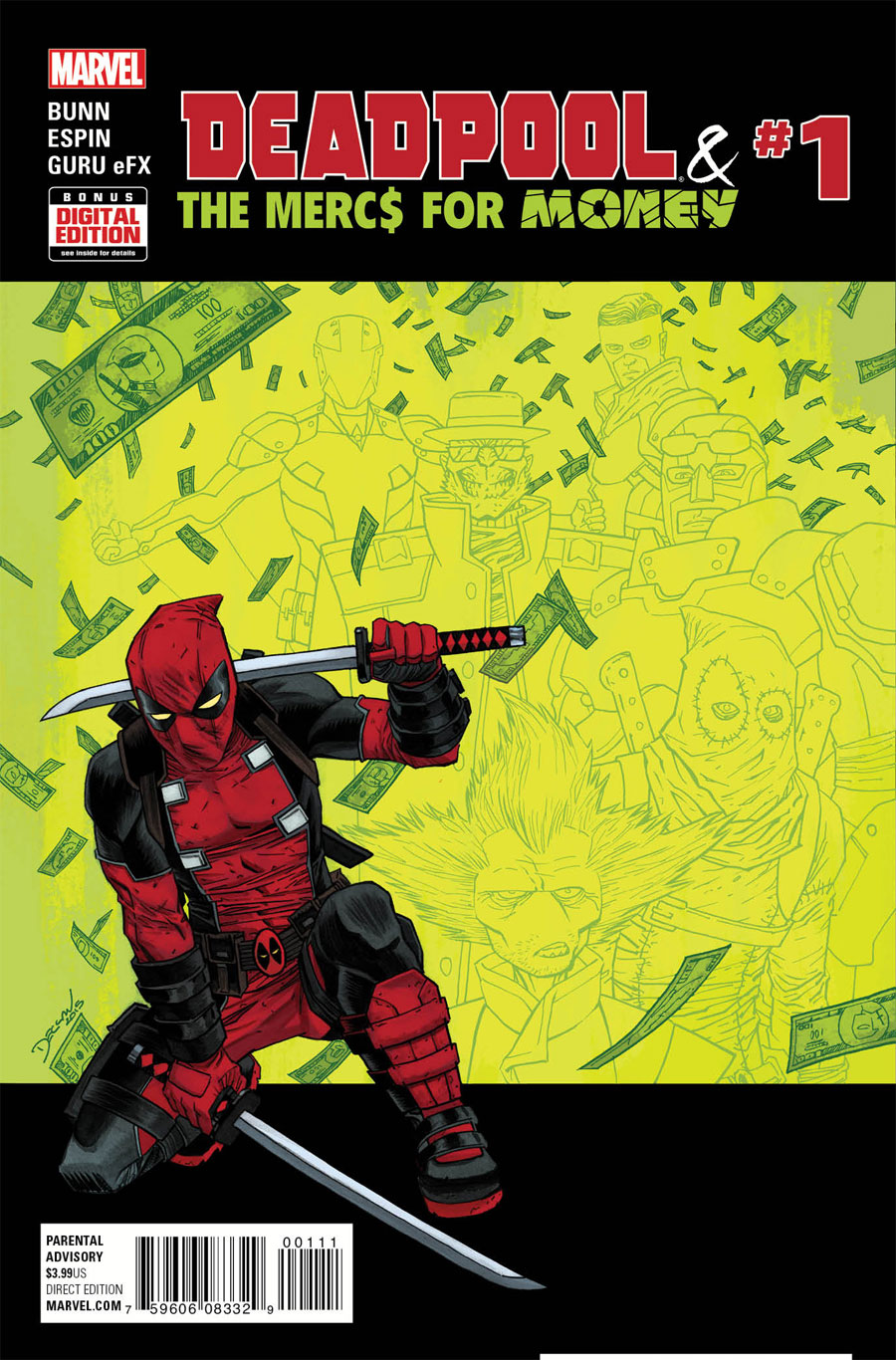 Anyone who’s been reading the latest “Deadpool” series can tell you that the Merc With A Mouth has gone corporate, even forming his own squad of mercenaries. With Wade’s knock-off A-Team at his side, will Deadpool prove to be the hero and leader he hopes to be or will everything turn into a mess, once again? Read on to find out! 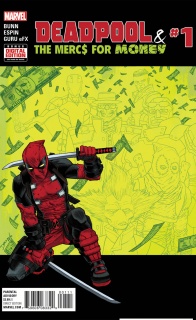 Deadpool might be an Avenger now, but he’s also got his own private team of mercenaries…the legally-cleared-to-be-called MERCS FOR MONEY! Got a problem you can’t solve on your own and a pile of money you’d like to be rid of? Just call Deadpool, Stingray, Massacre, Solo, Foolkiller, Terror and Slapstick and watch as that problem is shot, stabbed, eviscerated, pulverized and generally made bloody!

Deadpool, the kind-of Spider-Man kind-of immortal ninja assassin guy, has always worked really well in a team setting. He was a highlight in “Uncanny X-Force”, and his relationship with Steve Rogers in “Uncanny Avengers” is one of the more satisfying dynamics in Marvel right now. But what happens when Deadpool becomes the actual leader of a team? Gerry Duggan has been exploring that idea in the current “Deadpool” series, where Wade Wilson’s been cashing in on his new status as an Avenger to become an actual marketable superhero with is own team.

Cullen Bunn and Salvador Espin further flesh out the idea of Deadpool’s personal team in “The Mercs for Money” where a team composed of Deadpool, Stingray, Foolkiller, Slapstick and other Marvel C-listers. Basically, anyone Deadpool could get his hands on for cheapish. And after a mission goes typically awry (long story short: there’s a deadly squad of assassins from another universe based on Alice in Wonderland) Deadpool elects to dig everyone into a deeper pit with a decision that seems like a good idea now, but probably won’t when everyone is going to be shooting each other in issue #5.

One of the strengths in “Mercs for Money” is how, even in a fast-paced issue, it takes the time to elaborate on characters who only get a little bit of time over in “Deadpool” which is pretty vital since I haven’t heard about 3/4 of these guys since Deadpool recruited them. Terror gets to actually show off how his powers work, Stingray gets called out for humblebragging about being an ex-Avenger, and Slapstick’s feelings about being the only “real cartoon character” on a team of badass mercs end up being kind of compelling. In this one issue, Bunn really builds a dynamic between everyone on the team that makes them more than just Deadpool’s sidekicks. You actually care about them just as much, if not more, than Deadpool who you know will at least get out of this whole venture okay enough to promote his Ryan Reynolds movie.

That said, the Mercs with Money aren’t exactly vulnerable themselves, considering they slaughtered enough henchmen in this one issue to populate a small country. Still, it’s somehow more lighthearted than gritty, thanks to Salvador Espin’s cartoonishly cute art. He’s not Skottie Young or anything, where everyone’s a small child, but Espin’s style is a nice hybrid between the violence that everyone’s dealing out and the ridiculous nature of the team’s members. I mean, Slapstick is literally a cartoon. Why wouldn’t he brawl with a team of Alice in Wonderland characters? Speaking of which, that battle ha a really smooth flow from one team member to another as the Mercs with a Mouth tag in and out to tackle the various Wonderland characters. Plus, Foolkiller having tiny little dormice swarm him is just kind of adorable in a disturbing way.

If you’re a fan of Deadpool’s current direction, “Deadpool & The Mercs For Money” is a great supplement to the side characters who aren’t getting enough love in the main title. And even if you haven’t read Deadpool, the concept of Deadpool running his own team is already pretty palatable.

Final Verdict: 7.3 – “Deadpool & The Mercs for Money” is an energetic spin-off from “Deadpool” that redefines the meaning of squad goals.