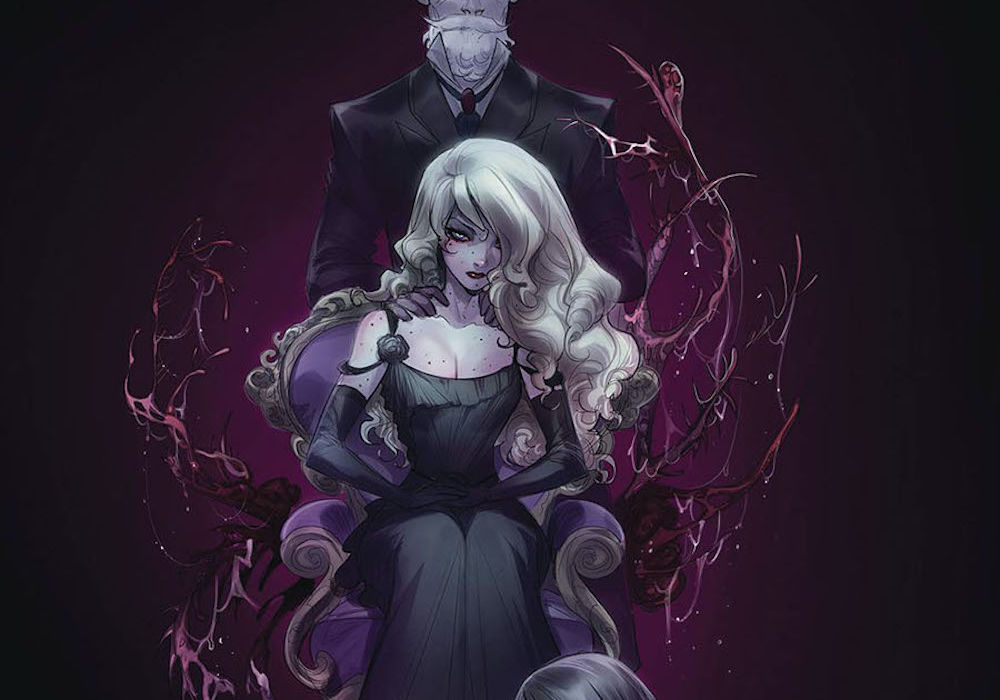 Gothic horror meets romance and intrigue in the ending of the first story arc for “Mercy.” 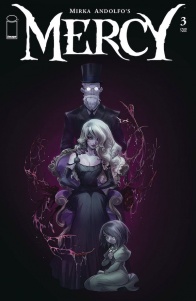 The first story arc of MIRKA ANDOLFO’s Gothic tale comes to an end. Lady Hellaine finds a love interest…or is this just a part of her machinations? Who are the ruthless “hunters,” and what are they tracking? And what’s their relationship with whatever lies in the abandoned mines?

Coming into “Mercy” #3 as a new reader is an odd experience, especially coming in at the very end of a story arc. Mirka Andolfo does tell an intriguing story, but without prior context, it can be difficult, though not impossible, to understand what exactly is going on with the various people in Woodsburgh. With horrors from monsters and undead to a dinner with a couple, along with a potentially budding romance, there is a lot to take in, and only so much can be adequately explained in incidental exposition. However, Andolfo does her best to provide a tale that can be jumped into regardless of prior exposure, with the general gist of the various characters possible to understand and be interested in on at least a surface level.

While the aforementioned incidental exposition does have its problems for people picking up “Mercy” #3 without having knowledge of the prior installments, Andolfo is by no means leaving new readers out in the cold with nothing. Just from the discussions and behavior shown in “Mercy” #3 alone, there is the makings of a Victorian era monster story, taking parts from various different pieces of literature and fiction in general, with a bit of hints toward a possible reference to a rough Doctor Victor Frankenstein analogue (at least for some of the story). The gothic horror extends from the actual, physical monsters to the nerves around implicitly normal people, and the trouble of keeping secrets. What will happen if they find out what is wrong? Who can be trusted? What do any of those involved have planned with the others?

Outside of the horror, there are other genres at work in Andolfo’s writing, both up front and in the background. The youthful exuberance of Lady Hellaine’s daughter (be it literally or figuratively) lends itself to a far brighter story, breaking up the possibly overwhelming sullen atmosphere. There is an overall air of intrigue to Lady Hellaine herself, as while readers know there is something very wrong with her, the social magnetism she seemingly exudes causes others to look at her and wonder far more. Meanwhile, Jonathan and Gregor both point toward a romantic story, with the former also integrating societal pressures and problems with relationships between different rungs on a social ladder. Even outside of those, there is the mystery involved with the tales of the “Woodsburgh Devil” monstrous serial killer (possibly explained in earlier issues, but treated as something of a mystery here), which causes the hounding behavior of the hunters from abroad. Together, these different stories collaborate to tell a truly interesting tale.

In general, Andolfo’s writing is relatively slowly paced. There is a lot of time spent just standing around and talking, or otherwise acting in relatively calm situations, without much going on. However, this pace works to the story’s advantage, much like tales such as Penny Dreadful. Rather than just be slow, the momentary peace acts as the calm before the storm, making moments of sudden action, especially those involving violence, all the more horrific or surprising.

While the story is already interesting, the true strength of “Mercy” #3 comes with Andolfo’s artistry. Every stroke of the pencil is meticulous and fascinating, every image having its own allure, from the central Lady Hellaine to many other characters, along with the dark, yet intense, world around them all.

The style utilizes soft, flowing lines to make for intricate emotional reactions. On the one hand, we have calm satisfaction in peaceful scenes, such as seeing Lady Hellaine or Rory in a peaceful light out of any real conflict. Meanwhile, there is an intense measure of shock to sudden moments of discomfort or violence, from a prelude to vomiting up normal food to a grisly murder. The latter also is even more horrifying, as the design of the monster is so close to human, yet so far from it all the same, that it fits deeply into the uncanny valley, making for the impression that anyone could be a horrifying monster in this apparent small town.

The only real downside is that at times, the artwork may be a bit too smooth, to the point of taking away realism. While the art does have an air of perfection, it is virtually unwavering and perhaps a bit too prominent overall, giving a sense of unreality to the entire picture. However, if the only problem is that,

On the coloring side, Andolfo, aided by Gianluca Papi and Francesca Carotenuto, is very good at accentuating the tone of a wide variety of scenes. The cooler colors in the dark help to add to the intrigue of Lady Hellaine and the gothic atmosphere, while the splashes of red, from blood and gore to simple shocking appearances of characters into a scene, help to mix things up. Overall, the colors work marvelously with the already well-handled illustrations to deliver a complete visual package.

Final Verdict: 7.0– An interesting story and amazing artwork are enticing, but might be weird for newcomers.