Michael Alan Nelson returns to the world of “Hexed” in this new #1, bringing with him new artist Dan Mora on the further adventures of Lucifer. Check out our review of this brand new “Hexed” #1 from BOOM! Studios to find out why this tale of magic and thievery is something you should be checking out. 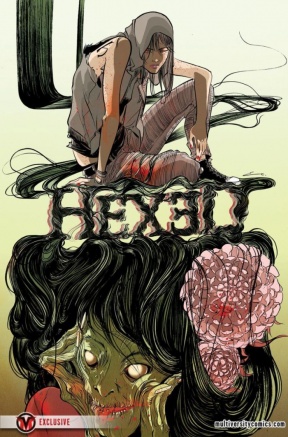 WHY WE LOVE IT: Besides being one of our favorite writers, Michael Alan Nelson is one of the industry’s preeminent voices in horror, and we couldn’t be happier to be bringing back his fan-favorite creation HEXED for another dive into the depths of the Aether with an ongoing series!

WHY YOU’LL LOVE IT: Lucifer is the perfect mash-up of Buffy the Vampire Slayer and Lara Croft. Plus, HEXED was Pretty Deadly and Amazing Spider-Man superstar Emma Rios’ introduction to the American comics scene back in 2008, and new series artist Dan Mora is poised to continue the trend with his lyrical, horrific, and wholly unique take on Lucifer.

WHAT IT’S ABOUT: Luci Jennifer Inacio Das Neves (most people just call her “Lucifer”) is a supernatural thief-for-hire, stealing wondrous objects from the dark denizens of the netherworld for her mentor/mother figure, Val Brisendine. But when Lucifer accidentally unleashes a terrible evil from one of the paintings hanging in Val’s art gallery, will any of the tricks up her sleeve be enough to stop it?

Okay, so this is one of those reviews that might need a little history up front. “Hexed” was a four issue miniseries published by BOOM! Studios in 2009 written by Michael Alan Nelson (who returns here to continue the story) and illustrated in her first American work by Emma Rios (who returns only to provide covers). It was a tale of a heist permeated with a sense of magical realism, a genuinely interesting female lead character and enough implied world building to pack out a whole miniseries from. It was genuinely fun and a book to keep an eye out for lest it be lost to the sands of time. Here, Michael Alan Nelson finally returns to “Hexed” and Lucifer, bringing them both back with a new ongoing series and a new artist in Dan Mora.

Now, I know what you might be thinking, but worry not: you do not need to have read the miniseries to pick up this #1. Michael Alan Nelson is smart that way. Because “Hexed” was originally a miniseries, the story it told was self-contained, but with an ending open enough that the world could continue in a sequel much like this one. The only way reading the miniseries would inform your reading of this #1 is a familiarity with the characters, but Nelson takes care in his writing to introduce them here in a way that would not confuse new readers. Not that I’m saying not to pick up a trade of the “Hexed” miniseries if you’re going to pick this, but it isn’t necessary to understand this issue.

What really makes “Hexed” stand out among other supernatural or magic focused stories is that, at it’s core, “Hexed” isn’t a supernatural or magic focused story. It’s essentially a heist film set in a world of magical reality where the existence of angels and demons, magic and other dimensions is seen as normal to someone like Lucifer. What that allows for is a story that doesn’t feel the need to explain all this to the audience by sitting down an audience surrogate and expositing to them for much of the issue. Instead, Nelson kicks things off with a bang by interrupting Lucifer mid-heist and from there piling on the twists and turns at breakneck speed to kick off this new story.

That’s perhaps why this issue works so well, as Nelson wastes no time in holding the reader’s hand and explaining the world to them and instead allows the world to exist and speak for itself through the characters and focuses on kicking off the plot with a bang. There are a lot of characters and story elements set-up and introduced (or re-introduced, depending on your perspective) and while that could burden down many other issues, especially #1s, Nelson takes care to make sure the writing focuses on the characters and their relationships in setting up the plot.

Nelson takes care in avoiding the trap of spending too much time explaining the existence and rules of magic in the world of “Hexed” and forgetting about the characters by simply not explaining the existence and rules of magic. It’s a very simple case of ‘show, don’t tell’ and by focusing on the characters and their relationships as the plot pieces itself together and never simply dumping exposition on the reader, it leaves an air of mystery to the magic and those characters that use it. It gives the world a much grander feeling and Nelson manages to hint towards a greater depth quite easily through it, instantly hooking in the reader into this world.

The writing from Nelson has proved to still be in top form, taking what was laid down in the miniseries and forging ahead in a new story with it, but there is a new element to this ongoing: Dan Mora. “Hexed” was Emma Rios’ first American work and while her style has evolved much since then, her use of Japanese and European influences gave the series an aesthetic different to almost any other book. It would be hard to find an artist who could bring the same sense of aesthetic to this ongoing while still feeling fresh and new, but Dan Mora nailed it perfectly.

Mora’s artwork has that same feeling of fluidity as Rios’ with an incredible sense of style in visualising the fantastical nature of Nelson’s script thanks to a heavily inked style fused with Japanese and European flavours, but he also brings a sense of American energy in the style hard edged, kinetic work of Tradd Moore and Matteo Scalera. That’s the long, name-dropping way of saying the art is really. It feels intrinsic to the aesthetic that made “Hexed” stand out in the first place while evolving it to feel fresh, new and allows Mora to play with a number of styles. A moment in the issue involves Lucifer entering a pocket dimension that allows Mora and colourist Gabriel Cassata to create a murky, dream-like world completely unlike anything else in the book, keeping the artwork fresh and inventive from page to page. Simply put, there is no other artist that could have replaced an artist like Emma Rios with as much style and grace as Dan Mora did while keeping “Hexed” feeling like it should.

I can think of no reason to not pick up “Hexed” #1. The world that Michael Alan Nelson has created is inventive, unique and interesting populated with fascinating characters and more mysteries than you can imagine. What we got in 2009 was but a taste of the world that Lucifer inhabits and Nelson comes shooting out of the gate here to prove that things are going to get wild from here on out and there is no better time to jump on this train. It also helps that the book is gorgeous, from the covers by Emma Rios to the interiors by Dan Mora, who fuses intense style with genuine storytelling substance. This is simply a fun comic that you have nothing to lose by checking it out, as it is very hard not to love “Hexed”.

Final Verdict: 8.7 – A very strong start to a series that could easily have been swept under the rug, but deserves to be sought out by all.