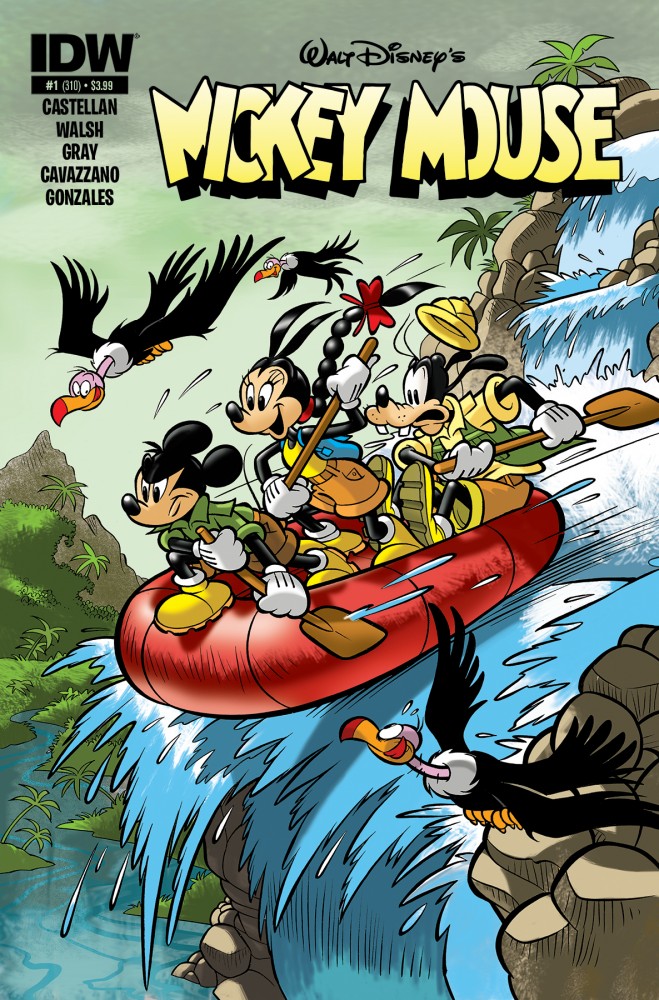 Mickey Mouse is back in his own self-titled series, featuring new adventures with his pals that maintain the G-rated charm you’ve come to expect from Disney. 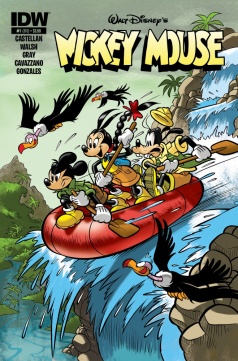 When two-fisted Mickey hunts “The Lost Explorers’ Trail,” he isn’t counting on help from jungle daredevil Eurasia Toft… but here she is!

Mickey Mouse and Superman have a lot in common. Both grew from simple hand-drawn creations into cultural icons and corporate mascots for their multi-conglomerate overlords. That same corporate status has at times kept both characters in a state of suspended animation, without a lot of new ideas impacting them. While comics are the home of Superman, the same medium represents a different set of creative possibilities for Mickey Mouse in the newly relaunched series from IDW. The short format harkens back to the original animated Mickey shorts, where the limited running time allowed creators to dump the character in complete worlds with concise adventures.

The new #1 (or #310 if you’re looking at the legacy numbering) opens with “The Lost Explorers’ Trail”. Mickey and Goofy are busy having a pancake flipping contest when an exhausted twitterbird lands on Mickey’s front step with an urgent message. Unfortunately, the message was meant for Mickey’s neighbor Pangea Toft, a famous retired explorer who dreams of finding his friends who disappeared two decades previously. Mickey, always up for an impromptu adventure, hops on a plane with Goofy and Eurasia Toft, niece of Pangea, to explore the jungle and find the lost group.

Andrea Castellan has been a Disney comics writer for over 12 years now, which means that he has a firm grasp on this universe and its inhabitants. He even had the chance to expand the Mouse world when he created the character of Eurasia Toft, who is easily the smartest and most capable character in this story. Castellan’s decade plus of experience is demonstrated through his firm grasp on the dialog patterns of Mickey and Goofy. With characters as ubiquitous as these two, just about every reader has an idea of how they should sound and act. Castellan writers them well enough that it’s easy to imagine Mickey and Goofy’s distinct cartoon voices speaking the words on the page.

The story itself harkens to the globetrotting adventures found in Carl Bark’s popular and acclaimed “Uncle Scrooge” tales. The group of explorers travel to a fictitious central African country, where they use their intelligence, positive attitudes and Eurasia’s knack for languages to make new friends and find the lost group. While it is slightly worrisome that the only Africans we see live in huts and carry spears, the new friends that Mickey and the group make are all intelligent and friendly, and are portrayed much more sensitively than in similarly-themed Gold and Silver Age comics. It’s just an adventure story, in the mold of Indiana Jones and Sir Arthur Conan Doyle, with twists and turns and teamwork that overcomes the odds.

The art in “The Lost Explorers’ Trail” from Giorgio Cavazzano captures the feeling of a classic Disney short. With characters this famous, he isn’t trying to reinvent the wheel, but still creates images that are fun and exciting while honouring the legacy of this word. He uses bold, thick lines to make each component stand out, even the backgrounds. As the story leap frogs from the suburbs of Mouseton to dense jungles and stormy rapids, Cavazzano’s art easily adapts to each setting and fills it with the same level of detail and attention. It’s a long story, 34 pages with 5 or 6 panels on almost every page, but the art never feels rushed or dashed off.

The remainder of the issue features three much shorter stories. There’s “Caws and Effect”, starring Pluto and two reprints, “Introducing Ellsworth” and “The Great Escape”, featuring Ellsworth, a Disney character rarely seen since the Silver Age. All three stories, written by Bill Walsh and Don R. Christensen, are fast paced and lighthearted, with traditional gags and punch lines that capture the feel of those animated shorts. Manuel Gonzales and Paul Murry pencil classic Disney-style art that create unified tones and a happy atmosphere.

The first issue of the relaunched “Mickey Mouse” is harmless and pithy fun. The main audience is clearly children and Disney-fanatics. Don’t go into it expecting deep, earth-shattering changes to the Disney universe. The younger audience is sure to like the fun and adventurous stories, while long-time Disney fans will like the way they honor and continue the legacy of these characters in comics.

Final Verdict: 7.5 – A group of fast-paced and entertaining stories that inhabitant the classic Disney-feel.