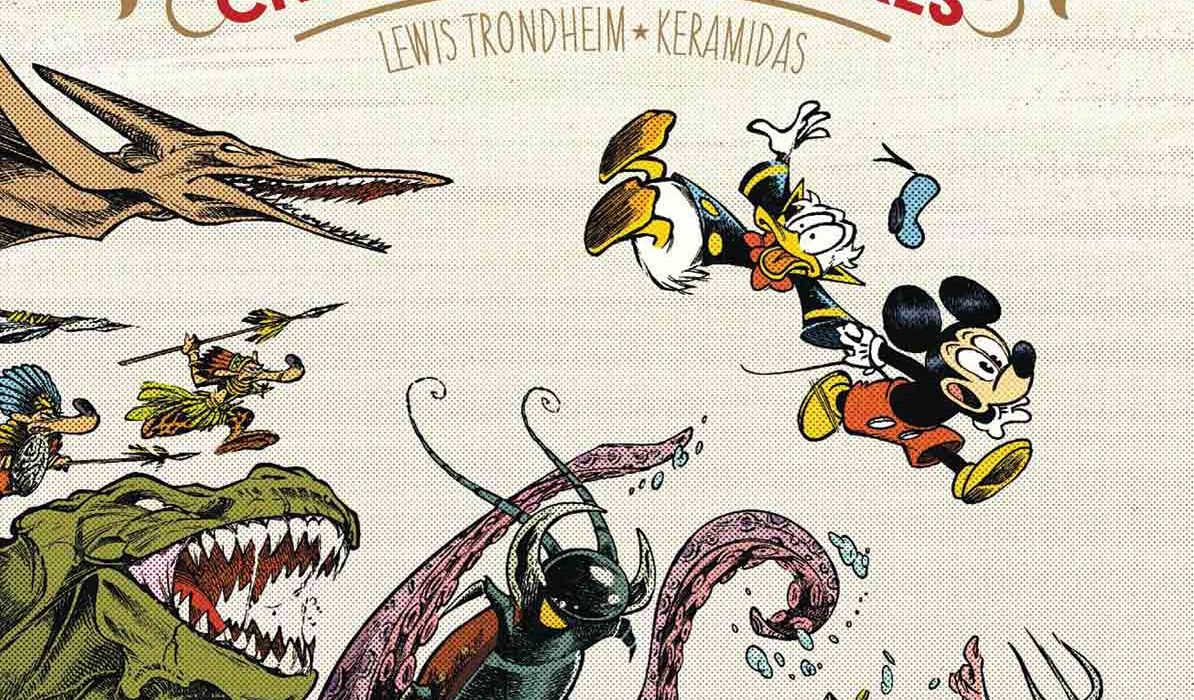 Taking the guise of an old lost comic from the ’60s, “Mickey’s Craziest Adventures” is everything you could hope for from a Disney comic. Fast paced, with dozens of fantastic locations, and loaded with creative gags and situations, the book proves to be a consistent treat. Lewis Trondheim and [Nick] Keramidas turn in a comic that’s clever, imaginative, and experimental without ever being alienating. 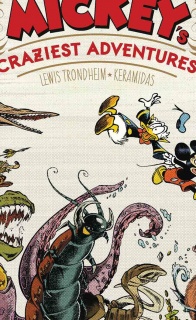 Written by Lewis Trondheim
Illustrated by Keramidas and Brigitte Findakly
Translated by Ivanka Hahnenberger
It’s a “lost” 1965 Disney epic, deemed too wild for publication and saved only in tantalizing fragments… or is it? When Pegleg Pete and the Beagle Boys shrink and steal Scrooge’s Money Bin, Mickey and Donald must track them down-in what is really a brand-new album-length thriller by comics masters Lewis Trondheim and Nicolas Keramidas: told in an amazing indy style and presented like a treasure suspended in time!

There’s a lot of empty spaces throughout “Mickey’s Craziest Adventures”. The conceit behind the comic involves the editors finding a long-lost and rare spinoff of “Walt Disney’s Comics and Stories,” called “Mickey’s Quest.” Unfortunately, while a good portion of this comic has been found, there are a bunch of pages that have disappeared into the annals of history. The collection claims to have collected everything that they’ve managed to uncover for the first time in decades.

Except that’s not true.

Because there never was a comic called “Mickey’s Quest.”

Lewis Trondheim and Keramidas use the idea to deliver a meta-textual entity, parodying those reprinted editions of lost material (much like the sort of work many of IDW’s imprints put out). If anything, I don’t think they go far enough with the joke, but of course, that might be because they’re still sort of at the mercy of the Disney corporation. Even with all this postmodern nonsense flying around, that Trondheim and Keramidas are able to turn in a fully enjoyable, funny, and thrilling adventure speaks only toward their skill.

The setup will be familiar to even the most casual Disney fan: the Beagle Boys are making another attempt at Scrooge McDuck’s money bin. This time, however, they’ve teamed up with Peg-Leg Pete, which of course leaves Mickey Mouse with his own nemesis to deal with. Their plan involves a shrink ray, making the first set piece a chase through the floorboards. Eventually they end up in South America and beyond.

Along the way, Mickey and Donald — with a host of other characters in what accounts to mostly cameos — get mixed up and involved in jungle chases and underwater adventures. They even end up on the moon at one point. Trondheim and Kermidas deliver these sequences with a true exuberance and understanding of the characters. Keramidas’s cartooning is slightly off-model, but it feels a but it feels more daring for it. They have some fun gags (including a “there’s always a bigger fish” one that lands particularly well) and thrilling chase sequences. What’s more Keramidas understands how these characters hold themselves, so their expressions and reactions feel authentic including those moments their designs skewer away from the character sheet.

But the most notable thing about the book is all those missing pages. From the very start, the book claims this is an incomplete work. Trondheim and Keramidas start us off in one locations before suddenly jumping to an entirely different environment. Meanwhile, we’re left trying to fill in the gaps about how Mickey and Donald ended up in their next predicament, and that makes for a significant portion of the book’s enjoyment. In fact, what I would love to see above all else is the work from the kids who take it upon themselves to fill in all the missing spaces.

Maybe Trondheim and Keramidas also don’t take this idea far enough. We get the missing pages and whatnot, but that’s the extent of the idea. For such an enticing forward, to not have any moments where the commentary continues and the joke goes further seems like a wasted opportunity. The pages are given a weathered and aged look and there are more than a few instances where the a tear or burn cuts through the pages. But with material like this, I wish they had went all in. And yes, while Tronheim and Keramidas do turn in a solid adventure, their tiptoeing around the joke makes it feel like they didn’t quite know how to commit. The Disney characters and their personalities are so ingrained into our psyches that you can put them into any situation and watch it unfold (barring, of course, interference from the corporate overlords). By backing off from that main joke, “Mickey’s Craziest Adventures” has this timid undercurrent to it.

Nevertheless, “Mickey’s Craziest Adventures” is a great piece of work. Filled with crazy situations, plenty of humor, and lively, understanding art, it works with and against its conceit. Lewis Trondheim and Keramidas might never make a full commitment to their joke, but there’s more than enough in the material itself to make up for it. I think this might be the best thing IDW has released through their Disney license so far.

Final Verdict: 8.5 – Lewis Trondheim and Keramidas turn out a fantastic little comic that will let your imagination explode.