When I first saw the solicit for “Middlewest,” I knew it was going to be in the very least interesting. Skottie Young has completely married himself to a particular style, and was running the risk of turning into a Tim Burton-like parody of himself. With “Middlewest,” Young proves that while his style is still particular to him, there’s a vast world of tones and stories he can use it to tell. And this one is wrenching! 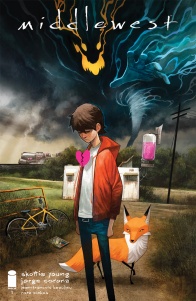 The lands between the coasts are vast, slow to change, and full of hidden magics. Mistakes have been made, and in this NEW ONGOING SERIES, an unwitting adventurer searches for answers to quell a coming storm that knows his name. From author SKOTTIE YOUNG (I HATE FAIRYLAND, Deadpool) and artist JORGE CORONA (NO. 1 WITH A BULLET, Feathers, Big Trouble in Little China: Old Man Jack) comes the tale of Abel, a young boy who must navigate an old land in order to reconcile his family’s history.

We all know Skottie Young from his various baby related projects. He’s done a bunch of other comics that range from the totally fun (“Rocket Raccoon”) to the critically acclaimed (“I Hate Fairyland”). I best know Young from the various “Wizard of Oz” comics he did for Marvel, which I bought for my baby cousin starting her journey into a wonderful life of fandom. The point is that Young has mostly focused on all-ages comics, while occasionally dipping into subversion. “Middlewest” belongs firmly in that second category. But unlike Young’s other subversive books, it has a tone all to itself.

“Middlewest” doesn’t have any gross-out humor. It doesn’t have loud colors or big sound effects. That’s because “Middlewest” is a little bleak. It’s softer, and more washed out than other Young books. But it marries the environment to a sense of whimsy that reminds you of other stories from middle America. Stranger Things comes to mind, as do the legion of stories it draws inspiration from (E.T., It, Close Encounters of the Third Kind). Those are stories that not only try to capture the innocence of childhood, but the terror of being sort of new to the world.

A lot of credit needs to be given to Jorge Corona. Young usually works as a cartoonist, writing and drawing his work simultaneously. He’s really, really good at it. Working with a collaborator is a completely different mode and if anything, Young’s writing has never been stronger. The world forged by this creative team is full of the familiar, but also deeply weird. Kids do paper routes on their bikes. They also have talking fox friends. Buildings are topped with canisters of a mysterious (and inconsequential?) pink liquid. The old gas station is mostly made of wood and the local punks like to shoplift from it. The magical meets the mundane in a way that will trigger the nostalgia of thousands of people who grew up in this sort of town but imagined it to be something stranger.

But the real conflict at the heart of this first issue is one that is so superbly written, it’s bound to stir up emotions in… well, everyone really. The hero of our story is a relatable young everyboy named Abel. He doesn’t have big dreams, he just sort of wants to have a nice day. And then there’s his dad, a bitter, cynical shell of a man that will be instantly recognizable to everyone. I guarantee you know this guy. Without saying it explicitly, he makes it abundantly clear that he resents his son for his youth, and is determined to punish him for it. He may tell himself he’s doing it for Abel’s own good, but really it’s from a deep abyss of resentment.

Watching this conflict escalate is goddamn brutal. I have a pretty friendly relationship with my dad, and it managed to play on a universal generational barrier. From the way Abel’s dad treats him like an entitled brat (“Now if you’re done patting yourself on the back, you can wipe that scowl off your face and get your ass out there and do that job you think you’re so good at.”) to the sad mobile home they reside in, you know this isn’t a sustainable situation. When Abel gets caught shoplifting by the kindly store owner, the dread is thick and viscous. When the confrontation arrives, it still manages to be worse than you can even imagine.

This is largely thanks to Young who again is writing some of the best words of his career. Abel manages to speak absolute truth to power, approaching the world with a childlike simplicity but articulating his points with an eloquence most kids are lacking (“Does that make you feel like a big man?”). His dad retorts with such clever cruelty (I can’t even bring myself to say it again) that it makes the worst scenario Roald Dhal ever imagined look like Winnie the Pooh.

While I’ve reserved a lot of praise for Young’s writing, that’s mostly because it came as a surprise to me. Young has written well in the past, but this is next level for him. I’ve been sort of quiet about Corona and the rest of the art team because they do a predictably spectacular job. Corona sort of copies Young’s famous style, but smooths out all the jagged edges. Everything is twisted and tilted like in a Young comic, but the sharp edges are curves. Jean-Francois Beaulieu (a frequent collaborator of Young) does colors for the book, and he too is doing some of the best work of his career. One page tells an entire story through the changing colors, from rich browns and blues to pink to a twilight purple. Have you ever had to wait for a parent to pick you up and you know they’re not coming? Corona and Beaulieu will put you right back there.

There’s a sketch in the back of the book of a farmer with a rake and a trucker hat asking, “What does a wizard look like?” Young says this is his mission statement. To capture the wonder and magic in America. Tell a Narnia-like story removed from the horses and hills of medieval Europe and told between the barns and tractors of a magical Missouri or Illinois. The story has barely begun, but I can already tell it is going to be a success. By trusting his collaborators, Young has laid the groundwork for what might become the defining work of his career. This debut issue makes a strong mission statement, and I can’t wait to find out what happens when the story truly takes a turn for the fantastical.

Final Verdict: 9.0 – Wonder, whimsy, trauma, and terror- this may be remembered as the definitive Skottie Young comic! You’ll never think about super-babies again.