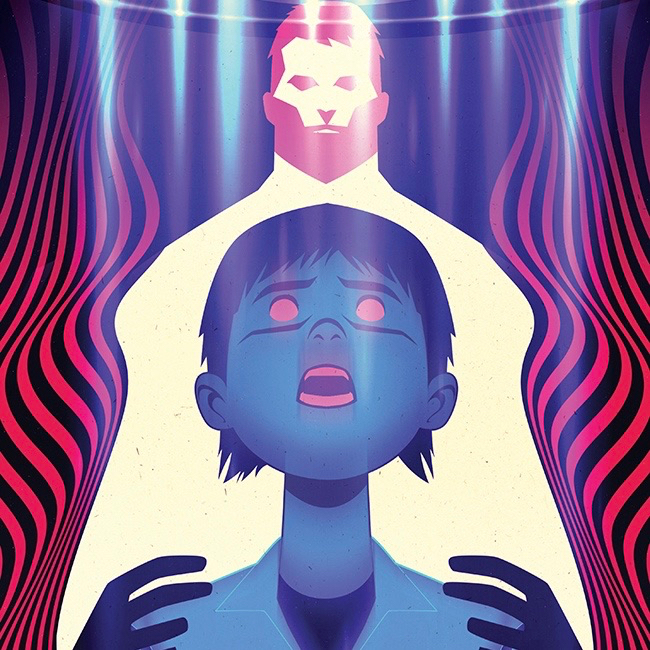 One of Eliot Rahal’s primary goals for his new creator-owned series from Aftershock was to write a pure science fiction story and make it feel real. With the release of “Midnight Vista” #1, so far, he succeeds. (Warning: may contain minor spoilers.) 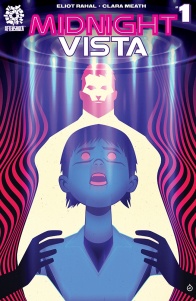 Oliver Flores and his stepfather, Nomar Perez, were turning right onto Midnight Vista Road when they were both abducted by aliens. To Oliver’s mother, they were both just missing. To the police, they were declared legally dead. And to everyone else growing up in Albuquerque, Oliver Flores was the “Milk Carton Kid”. His life was the cautionary tale of an eight-year-old who was kidnapped and killed by his stepdad while out for some ice cream. But now – years later – a fully grown adult Oliver walks back into town. He has been returned…and he remembers everything.

Though the details are strikingly different, the script for “Midnight Vista” was inspired by events from the writer’s own life. As author Eliot Rahal told The Hollywood Reporter in June, “It’s a weird thing to type on the page, but when I was a child I believe I had a close encounter and, as a result, have a couple of hours of missing time…. That event, whatever it was…has shaped a lot of my personality. It’s a vital part of my experience. And the craziest part of it all is…I barely remember any of it.”

Rahal freely admits he knows how crazy it sounds to seriously suggest he may have been abducted by space aliens. He knows full well how deep that rabbit hole can go, but he’s okay with it. He’s been wrestling the story for years, searching for a way to fictionalize the story’s core essence: loneliness, love, and the lost. To do that, Rahal strips away the majority of classic alien abduction tropes to tell a much more character-driven story.

Without question, the abduction of Oliver Flores and his sudden, inexplicable return almost two decades later are the central plot points, but Rahal’s high profile set-up principally serves as a doorway into a subtler, more complex human story. With a taut emotional core, authentic dialogue, and compelling interpersonal dynamics, Rahal doesn’t need to overplay his hard sci-fi hand. He knows we know what’s coming. So after he sets the stage with a seemingly simple scene that brilliantly intercuts snatches of audio from a series of changing TV channels with his mother’s angry voice as she berates her ex-husband over the phone, he wisely steps aside and allows his art teams to take over.

In contrast to Rahal’s highly evocative yet essentially nonlinear soundtrack, illustrator Clara Meath tells the visual story through a pitch-perfect sequence of well composed panels that yield masterful page turns. With a level of sophistication and expertise that feels a bit uncanny for a relative newcomer, these wonderfully crafted reveals – especially through the first 10 pages – tightly control the pace while adeptly driving the action and continuously raising the stakes.

Suddenly, the action peaks – thanks in large part to letterer Taylor Esposito – and we find ourselves in the midst of a cathartic two-page spread that somehow feels both inevitable and genuinely surprising. It’s here the real story begins.

Stylistically, too, the book can be separated into two distinct halves. The first part features bold lines, bright colors, and relatively stark, uncluttered compositions. After an abrupt but highly effective transition, however, the inks feel more delicate, the colors more muted, and the compositions more detailed. It’s a refreshing, intriguing choice. More often than not, desaturated colors and thin, wispy inks are used to signal prologue and flashback scenes. Here, Meath flips the script, giving scenes from the past more intensity and an aesthetically heightened sense of reality. The past feels unusually vivid, while the present seems less concrete, disorienting and even unsettled. It’s a great backdrop for Rahal’s well balanced dialogue. With a nice blend of straightforward information and moments of comedic relief, Rahal adds depth to both the narrative and Oliver’s character, adding credibility to the story’s major plot points while also making us care.

Colorist Mark Eglert also makes some unusual, but appealing creative choices. Rather than a familiar blend high-tech neon greens and blinding whites, the spaceship interior and aliens are bathed in an eye-popping combination of red, pink, and fuchsia. There’s definitely a deeply unsettling, otherworldly glow, but it’s decidedly different from the standard “alien abduction palette.” Intermittent use of the same bright fuchsia, beginning on the cover and interior title page before it reappears on the mother’s shoes and Uncle Nomar’s car, not only nicely foreshadows the book’s artistic centerpiece, it provides a subtle through line that helps visually tie things together.

Ultimately, even though its central conceit is built around one of science fiction’s most enduring tropes, this debut issue feels fresh and decidedly different, a human-centered story about an unwitting protagonist caught between worlds.

Final Verdict: 8.7 With a bold yet atypical visual aesthetic and authentic, well grounded script, “Midnight Vista” #1 takes the reader exactly where they need to go, setting up a run that feels full of great potential.