Like a wheel without an axle, I am here without my compatriot David, who is traveling to the wilds of Texas for a post-Christmas vacation. But I am getting by, mainly because I have the comfort of an issue of “Hellboy in Hell” to keep me company on this cold winter’s morn.

Below is a spoiler-free review of the second issue of Mike Mignola’s maseterpiece. 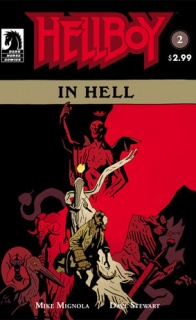 Written and Illustrated by Mike Mignola

In Pandemonium, the dead wait for Hellboy to claim his throne, but is he interested . . .?

Mike Mignola returns to draw Hellboy’s ongoing story for the first time since Conqueror Worm. It’s a story only Mignola could tell, as more of Hellboy’s secrets are revealed.

* Death was only the beginning.

Logic doesn’t always come into play with comics, especially emotional logic. If I was to witness someone falling from the sky in my neighborhood, it would be genuinely terrifying. But in comics, people fall from the sky all the time, and trauma doesn’t usually follow the reader in those instances. Violence/death/superpowers, it all tends to become commonplace. So, when a comic hits a real emotional note in a place that is unexpected, it comes as a surprise.

All of that is preamble to say this: Hell is a sad place, you guys.

Mike Mignola’s Hell isn’t the one the name typically suggests. Sure, there are flames, and red is the dominant color choice, but for every bit of traditional Hell imagery, there are ten pieces of ephemera that aren’t typically associated with it. And more than scary, the place looks lonely. Around each corner is…nothing. This barren, lonely land seems to seep revenge fantasies, moans of regret, and missed opportunity at every turn. This Hell holds no appeal for anyone, and therefore is one of the more successful representations of Hell in modern storytelling. For some people, fire and demons would be interesting – but who wants to see a blind/deaf smith pull terribly sad fish out of a river and smash them?

Hellboy is being led through Hell, specifically Pandemonium, a city that holds his throne, if he ever chooses to embrace his destiny. Hell is partly empty because he is so feared there, that people have fled rather than face him. One of my favorite panels in the entire book is of Hellboy’s “ring of office,” which features a fly trapped in amber. The image of this creature being trapped in time and space is a nice metaphor for being the king of Hell – preserved but powerless – or, at least powerless in any way that matters to Hellboy.

There is also a healthy dose of Hellboy’s origin found here, going into greater detail than, I believe, has ever been told before. David is the half of this combo with a functioning memory, but I can’t recall ever getting this perspective on Hellboy’s origins, and it adds to the profound sadness that permeates this book. The story of Hellboy, at this point, is more than ever a struggle of destiny. While Hellboy has had to live up to expectations his entire life (especially when considering the whole Arthurian legacy), being the rightful heir to the throne of Hell is the big cahuna. His presence in Hell is painful for him, fearsome for the inhabitants, and fascinating for the readers.

In addition to last issue’s Dickens, Shakespeare is referenced as Hellboy contemplates his future against MacBeth’s. Hellboy, part of the through line of British folklore, appears to be traveling through not only Hell, but the very fabric of the society of his heritage. The ghosts, not just of the damned, but also of his English backdrop are haunting him along every step of this journey.

Despite all the cleverness of the script, Mignola’s art is the selling point of this book, bar none. Working with the incredible Dave Stewart, Mignola’s art is simple and dramatic, never using 3 pen strokes when 2 would work just fine. Hell is just as black and grey as it is red in Mignola and Stewart’s hands, and each page features a deeper and yet more refined vision of Hell. Mignola has stripped all life from the world he draws, leaving barren trees, rock, and skeletal creatures, and by removing all virility from the images, it presents Hellboy in stark contrast to the world he’s now living. While he may be dead, he isn’t reduced to bone just yet.

When comparing Mignola’s art to just about anyone who works on “B.P.R.D.,” it is easy to forget that the two started out as a unified property. The intricate linework of James Harren or the stunning retro atmospheres of Tonci Zonjic seem miles away from the world Mignola is building. That said, no one else could ever draw this book with any speck of credibility; this is Mignola’s creative essence, distilled down to its purest form for our enjoyment. So, stop reading this, and go read (or re-read) one of the saddest, most unique, and finest books to come out in a long time.