This pleasant detour into the past rolls on, with Li’l Hellboy, Varvara, and the whole gang interacting with the Greatest Generation! 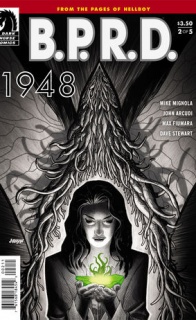 As the battle between the atomic-bred monsters and the B.P.R.D. rages in the Utah desert, Professor Bruttenholm and the agents successfully kill one of the beasts and conduct an autopsy with horrifying results.

Brian: Last time we were discussing this mini, we had the pleasure of being side by side, between two ferns at New York Comic Con. Sadly, now a continent divides us, and there are no ferns on my end at all. However, my enjoyment of this book has grown in a very fern-like way since last month. This issue, to me, is a much more satisfying one than its predecessor. What do you think?

David: I miss your musk! Your fern-infused musk!

But, on a less odd note, I agree entirely. I liked last issue. I thought this was one was a large step up though, and exceptional overall. I think the thing that really stretches throughout this and makes it pretty amazing is this strange, palpable sense of doom and foreboding throughout. I think if a comic is really, really good, you can almost feel it. This has a very real feeling of something impactful and bad coming the way of our heroes. Am I crazy in that regard? It’s something unquantifiable that I think is really exceptional.

Brian: I agree wholeheartedly; this comic feels like the sky right before a storm, where everything looks foreboding. Each corner of the story has its fear level amped up: Truman is coming, Anders is acting insane, the Professor leads a trip into the field unarmed. Every page turn in this issue had me expecting an explosion waiting for me. The dread was palpable.

Let’s talk plot a little bit – despite being two issues in, the overall plot hasn’t exactly coalesced yet. How do you see all these elements coming together?

David: Frankly, I have no clue. That’s the weird thing about this one. Typically by the second issue the overall architecture of a B.P.R.D. mini is starting to come into focus. Maybe not all of it, but you can see the big picture. For this one, I got nothing.

So far, it doesn’t bother me because I am enjoying the character interactions so much. I love seeing Bruttenholm annoyed at Varvara (VARVARA!) because she has his love pegged (which is great too). I love Pamcakes Hellboy around and the way the base dotes on him. Anders…he’s just a complete wild card, and that one scene in the shower makes me really wonder how he’s going to fit in.

Brian. I just don’t even know what to say. I really, really liked this issue, but I am completely at a loss as to what it will ultimately be all about and where it will go. Do you have a definite idea? Am I crazy? This book is a weird one.

Brian: I’m with you, man, I have no clue how this all ties together! But you are right, there are a slew of great character moments here, and I am enjoying being dropped into this world, so the plot seems secondary at this point. This is a longer mini than we normally get (3 issues seems to be the norm for B.P.R.D. lately), so perhaps by next issue things will coalesce a little more.

One thing that needn’t do much changing is Max Fiumara’s art. Good grief was it spectacular this issue. From the innocence of Li’l Hellboy to the savagery of slaughtering the bear-like creatures, Fiumara hit every note perfectly. Dark Horse is really knocking it out of the park in terms of finding artists for these minis. What say you?

David: Yeah, I think Max is getting more and more comfortable the more he works in the B.P.R.D. world. This issue was his best yet, and there were some really beautiful shots. My favorite were the opening panels, as the B.P.R.D. field agents with after the Bear Pig Men. There were two awesome panels of them making it rain gunfire, and the white space in the middle was of their shells/ammunition sprinkling into that white space. It was really effective work.

And yeah, they are great at finding people to work on this. I think it’s some mix of Mike, Scott and John tracking them down, but it always seems that they find gems to work on this book. I can’t really think of anyone whose work I didn’t enjoy.

So do you have anything else to add to the equation, besides the fact that a) this was a great issue and b) VARVARA!!!?

Brian: My only other real point of discussion is something I literally just remembered, which is that “B.P.R.D.: Vampire” is supposed to lead directly out of this book, which makes the book even more of a clusterfuck in terms of story – where does a vampire fit into this? Again, I am enjoying this, so it is somewhat a moot point, but this book has a whole lot going on, and I’m not great at gleaning its big picture just yet.

David: That makes sense to a degree. I mean, both 1946 and 1947 had vampire connections. You have to think that 1948 would eventually connect with those, and if it’s connecting to Vampire, then it only makes sense that the tie would be vampires. I think, given that we’re only two issues in, the idea that we have a good story so far with no idea where they’re going to go isn’t a huge deal to me. Maybe now that we know vampires will be involved, there is a small puzzle piece on the other side, but I’m fine without having much of the big picture yet.

So Brian, for this great yet highly mysterious story, what grade will you give it?

Brian: I think 8.0 is where I’m settling down on this one. Again, this is damn solid work, but I wish we had a bit more of a roadmap. How about you?

David: I’ll go with an 8.5. I guess we can think of it as the second fifth of a movie. If I were watching a movie and the second fifth was great and I didn’t know where it was going completely still, I think I would still really dig it. But I’d have to demerit it a bit. I think minus 1.5 is fair enough.