Abe and the citizens of Payson are acting rather strange this issue… at least, I think they are. 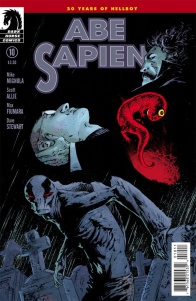 Abe saved a small Arizona town from one Lovecraftian menace, but a new killer threatens to devour the last survivors!

I must admit, I’m a little confused about this one. I think I know what the story is, but I’m not certain. But first, let’s deal with the bits I do understand, which is primarily the stuff with Gustav Strobl and Agent Vaughn.

From issue five to issue seven there wasn’t a lot of forward momentum with this plotline. Essentially Strobl and Vaughn have been chatting in a carriage on their way to Seattle. Before that Vaughn was dead, and it’s only by Strobl’s power that he lives again. So Vaughn has been learning what he can about how this is possible. This issue he finally decides to escape or perhaps to test his boundaries.

It’s only a few pages in this issue, but it is nice to see this plotline going somewhere after spinning its wheels and ladling exposition. It also seems that while Strobl is in control for now, he’s seriously underestimated Vaughn. He keeps referring to him as a solider, and to an extent that is what he’s become since the plague of frogs and the following hell on Earth began, but Vaughn’s been a part of the B.P.R.D. since the early 1980s. He’s a paranormal investigator first, a soldier second, and I think he is grasping the implications of what’s going on better than Strobl realises.

The other plotline, the one in Payson, is a bit more muddy. After the burn from the last issue, Abe and J.J. seem to be behaving very strangely. Abe seems to have spark with Suzy, and J.J. seems jealous, and though he denies it, he also warns Abe he doesn’t want any drama… Oh, and I should probably mention both have been drinking very heavily by this point.

In case you can’t remember, last issue while setting up the burn for the infected horse corpses, there were a few incidents of contamination. And it seems the contamination is affecting the residents of Payson and Abe. At least I think so. The problem is, I don’t know the residents of Payson well enough to know if they’re acting out of character, so really I’m basing a lot of this on Abe’s extremely unusual behaviour. (A guy who normally keeps things to himself suddenly going, “So, I know this is classified, but I used to be this guy called Langdon Caul…”)

It could be that it’s only Abe being weird though. I’m not sure.

This is further complicated by the youths living on the local golf course. These guys are also acting very strangely, but for an entirely different reason. They aren’t locals, they came to Payson recently, and they’ve clearly got something to hide. And nothing seems to link them to the horse corpses, so it seems whatever’s making them act the way they are is something they brought with them. I’m making the plot seem more complicated than it is… but I’m not the only one.

In the review for the last issue Brian spoke a little about his difficulty with the way sequences were played out in parallel, and if it weren’t for Dave Stewart’s colours, I would have found it confusing myself. Dave’s colours are working really hard to establish time and place, and the reader has to work harder than usual to look for those cues. The immediacy of what’s happening in the scenes is lost in the process.

And I don’t know why many sequences are being told in parallel, as other than a similar tone, they have little to do with each other, and contrasting them side by side says nothing to heighten one or the other. If anything, they rob each other. There are scenes in which an object is observed, then the next panel we’re in another place in another scene, then we return to the former scene and we get a panel of the object’s observer and their reaction to what they’re seeing. There’s a panel sitting right in the middle of the cause and effect. Normally a comic shows an object observed and the very next panel shows the observer’s reaction (or vice versa). Having the two panels right next to each other makes readers connect the two. That’s part of how we’ve been taught to read comics.

So a stylistic choice has been made to eschew traditional comics storytelling techniques. I don’t mind this occasionally, especially for a very deliberate effect, but in this case I can’t see what’s gained by doing this. It makes sequences that should be full of energy become laborious. And worse than that, it means subtle character changes can be missed.

Comics are all about story through change, which is why you’ll notice comics that rely heavily on character acting tend to keep their framing relatively static, so that the reader’s attention focuses on the changes that are important. By dropping a single panel from another scene into the middle of the action, the focus is lost in the more talk-heavy scenes and the dialogue has to carry much more of the storytelling than it really should in a comic.

In a story in which the reader is already familiar with the characters this would be probably less of a problem, but in this case, everyone is new except for Abe, and it feels like a stylistic choice is getting in the way of a major part of the storytelling.

I had a similar problem with the action scene at the end of Abe Sapien #7, where often it was intercutting between two characters panel by panel, and I felt that in order for the reader to rapidly understand what each character’s focus was, to get a moment in their headspace, we needed to stay with one character for two or three panels. It slowed down a scene that was supposed to be fast paced. So this isn’t a problem with just this issue.

I think this stylistic technique can be a useful one, especially when the author wants to juxtapose two scenes, but in this case using it so frequently is hurting the storytelling to the point that even when it is used effectively, the impact of it is lessened.

Max Fiumara’s work is excellent, but at the moment, his layouts have to work very hard to maintain the clarity of the story and his character acting is being displaced to the side by the storytelling choices being made. And the burden of establishing time and place is resting on Dave Stewart far more than it should.

I like Abe Sapien, and it pains me to write such a lecture of a review, but I’ve been seeing steadily more and more comments on reviews for the series saying that it lacks focus. When Abe Sapien #8 came out, it was received far better by readers (I read practically all the reviews I could find and the comments on them, just to be sure). Reading that story, the focus is on Abe the whole time. There were no other scenes to cut away to, and suddenly the pacing comes to life, and you’re right there alongside Abe in his headspace. And that’s what I’m missing from the ongoing series at the moment.

I hope this is something that can be reined in in future, because the wall it’s putting between the characters and readers is troubling, and used sparsely it is far more powerful.

If you’re wondering what the image below is all about, good, you should be… 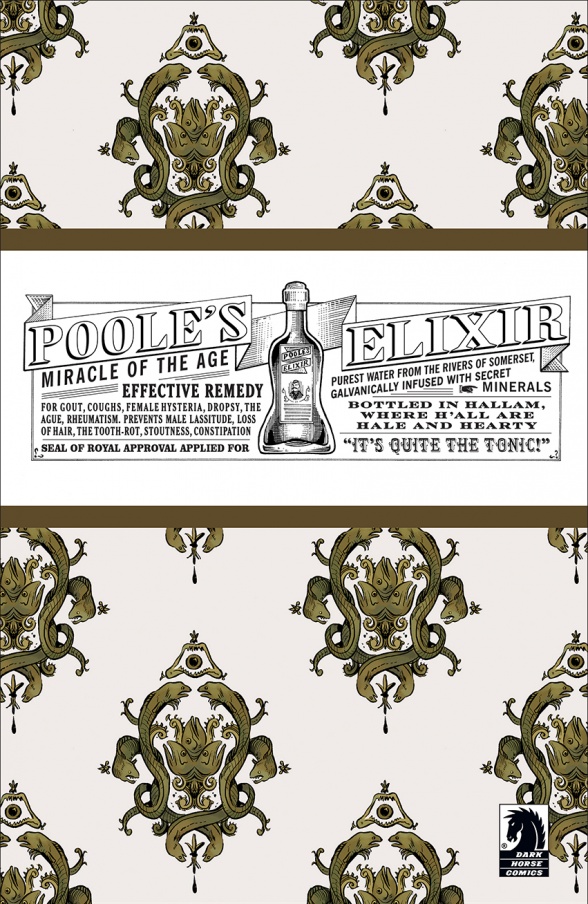