Spoilers to follow in this one. Jump right to the end for my grade if you haven’t read it yet. 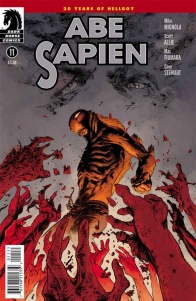 As a zombie swarm threatens a small Arizona town, a mad necromancer rises over the monster-infested ruins of Seattle.

This issue was a mixed bag for me. The problems I spoke about in my review of the last issue are still present, but with this final part it’s easier to step back and see this thing as a whole. So this is less of a review of this third issue and more a review of this whole arc. 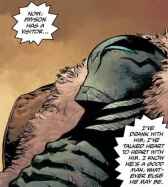 Page 23, Panel 4.
To me, this story feels like it was written with the trade in mind, not so much for the individual issues. The best example of this I can think of is in the second last panel on the second last page. Some readers may wonder where Abe is in this panel and why he looks so happy about an entire town being slaughtered. However, with the second issue still fresh in my mind, I recognised the couch he was sitting on and the shag blanket thrown over it as being the one from J.J.’s house when the two where drinking and swapping stories, and this panel was a flashback to that moment. However, with a month between issues (and many other comics read in between), I think some readers are going to miss that.

In my review for the last issue, I got sidetracked from the main story threads when I was derailed by all the contamination stuff, which in this issue turned out to be irrelevant… so I’ve gotta wonder why contamination was pointed out on three separate occasions in the previous two issues. Why not just once? Time spent on any particular thought in a comic is emphasis, and here I think it was misplaced.

Given the ending that this all leads to (especially with J.J.’s video message), I feel the empasis should have been more squarely on bonding in order for it to resonate. The thing is, there was very little bonding because Abe and Suzy don’t get enough panel time to really mean anything, coming off as more of an afterthought, and J.J. is an obstacle first and a character second, which very quickly put up walls to forming anything more than a weak relationship with Abe.

The conflict between Abe and J.J., the one that matters in the context of the ending, was squarely with the kids on the golf course. But that conflict didn’t hit as hard as it should have because J.J. conflicted with Abe on everything. Honestly, I don’t know how Abe got to the point of getting drunk with this guy in the second issue when he so clearly had an axe to grind.

What this ending needed was for these guys to click at first, to clearly have a strong mutual respect for each other, so that when they got to the drinking sequence, it doesn’t seem to come out of left field, but rather a natural progression of the relationship up to that point. That way the characters can both drop their guard, have a genuine moment of connection, with not just Abe drunken flopping about on the couch, but both of them. Then when J.J. brings up his son, and there’s that photograph of him on the fridge, it becomes a striking and sobering moment of change. There needed to be a stronger contrast in tone, so that shift hit the reader harder.

Having faith in kids that other people write off as a lost cause is a deeply personal issue with J.J. and, for me at least, it was the real core of the character. It’s something ultimately optimistic, yet can become a serious blindspot that can create extreme conflict. This makes the moment when Abe goes to confront the kids in this issue a moment of conflict on a personal level. He’s butting heads with the very core of J.J.’s being, and when that relationship is ultimately severed by J.J.’s death, it means something more than it did in the final issue.

From Hellboy in Hell #2.
There were other things in this story that, while they did work, could have worked better if visual touchstones had been developed in the first and second issues. Mike Mignola does this a lot in his work, where he’ll introduce a specific panel with very specific colours that he can call back to. In fact, there’s even a panel like that in this issue, calling back to Hellboy in Hell #2-4.

In the sequence when Abe is wandering through the town, going past familiar locations, empty and covered in blood, the horror is coming across, but the familiar locations part is muted when it should have been immediate and cut to the heart like a knife. That sequence would have been that much more punchy if the panels were identical to panels in which these locations were first introduced in prior issues, when they were happy places full of people.

I also kind of wish there had been a way for J.J. to have been killed in his home, so that the place where he and Abe had bonded had been desecrated, that couch with the shag blanket covered in blood, and so that the reader can connect that place in space and time with that panel of Abe on the second last page in which the couch isn’t covered in blood.

When Abe was wandering through a bloodied Payson, I wish the scene had stayed with him too. This wasn’t necessarily the wrong choice to make, as intercutting it with talk of a new Hell gave it this grand scale. It was more that we’ve had a lot of this grand scale stuff in B.P.R.D., and after the bonding with the Payson residents, I wanted to feel Abe experience this moment on a much more intimate level. We see what he sees, but we don’t get to see much of his reaction to any of this stuff. We see broad locations, we don’t really see personal links to Abe’s experiences with Payson. It seems odd for a solo book to keep Abe’s emotional state at arm’s length.

I’m glad that’s out of the way now, because there are things I enjoyed in this issue too. While the Payson stuff felt flat for me, the stuff in Seattle worked. It had a much narrower focus and it brought that plotline to life. We’ve seen a ruined city before, but Seattle is something else, something otherworldly (thank you, Dave Stewart).

Max Fiumara is great all through this issue, but in the longer, unbroken scenes he really shines. Especially Vaughn. There’s a frame with Vaughn lying on his back clutching at his face that just… you’re there. You get where that guy is at. These were the moments that got me curious about the future, and really feeling the trap Vaughn is in. And that grand scale stuff worked on a personal level in his scenes. It emphasised his smallness, his frailty, and his helplessness.

I swear this stuff is going to have huge connections to the recently announced Witchfinder: The Mysteries of Unland too. If the eels weren’t a big clue, you should probably read Witchfinder: In the Service of Angels again. Gustav Strobl has a bit of history with giant eels…

And then there’s Rosario, a location that I’ve been teasing Abe was heading towards on the B.P.R.D. Hell on Earth map (see the Journeys section). The Rosario arc should hopefully throw some hard personal challenges at Abe, and shake him into being more pro-active. We’ll just have to wait and see.

Final Verdict: 6.5. I liked this more than the last one, but the story still needs a tighter focus on the emotional components.

Abe Sapien will be taking a break next month before it returns in May with The Garden, a one-shot from Max Fiumara, then Sebastián Fiumara will be back in June for the book’s next major arc.